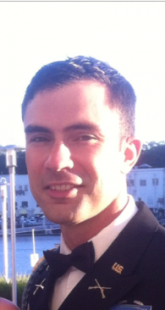 Major Dave Ahern graduated from Wheaton College in 2005 and received a commission as a 2nd Lieutenant in the Infantry. Major Ahern’s first assignment was to Fort Campbell, Kentucky where he served as a Platoon Leader and Executive Officer in 2/327th IN, 1st Brigade Combat Team, 101st Airborne Division. Following a deployment to Samarra, Iraq in Agust of 2007 and the completion of the Maneuver Captain’s Career Course, Major Ahern was assigned to 1-66th AR, 1st Brigade Combat Team 4th Infantry Division. He took command of Alpha Company in January 2010 and deployed in support of surge operations to Kandahar, Afghanistan in June 2010 for 12 months.

Major Ahern is married to the former Erin Kelley of Rockford, Illinois.