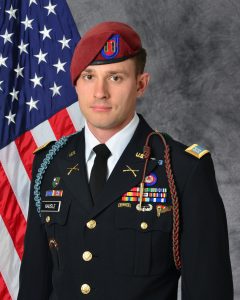 As a captain, Brian was assigned to the 82nd Airborne Division where he served as a Brigade Air Officer and Company Commander before returning to 1st Ranger Battalion to command Delta Company. Brian has deployed seven times to Afghanistan in support of Operations Enduring Freedom and Freedom’s Sentinel.

Brian is pursuing a Master in Public Policy from the Harvard Kennedy School. He is married to Sara Nichols of Rome, Georgia; they have two daughters.