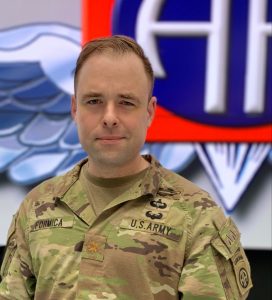 MAJ Tony Formica was born to a military family in El Paso, Texas, and grew up principally in Fort Hood, Texas.  He commissioned from West Point as an infantry lieutenant in 2009; his first duty station was with 1/25 SBCT in Fort Wainwright, Alaska. He has also served as an OC/T at the Joint Readiness Training Center, a company commander in the 173rd IBCT (A), and currently serves as the Chief of the 82nd Airborne Division’s Information Warfare Task Force. Tony has deployed in support of Operations Enduring Freedom, Atlantic Resolve, Atlantic Sentry, Allies Refuge, and New Normal, the NATO response to Russia’s war of aggression in Ukraine. Tony attended Yale University’s Jackson Institute of Global Affairs.