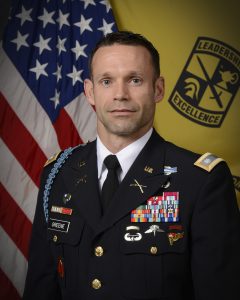 Colonel Morgan D. Greene earned his commission from the United States Military Academy at West Point in 2002, earning a Bachelor of Science in both Mathematics and Physics. COL Greene was selected as a Downing Scholar in 2010 and earned his master’s degree in Public Affairs with a focus on International Relations from Princeton University in 2012. As an Infantry Officer, COL Greene served in a variety of conventional and special operations units from platoon leader to squadron commander deploying 10 times in support of the Global War on Terror. COL Greene currently serves as the Professor of Military Science at Western Kentucky University, which will be his last assignment before retiring in 2023. His awards and decorations include the Bronze Star Medal for Valor and Ranger Tab. His wife, Becca Rae, is a tremendously talented Nashville-based songwriter. Together, they have two beautiful daughters – Emmylou and Maybelle.