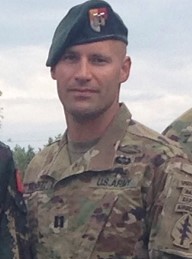 Captain Scott Modesitt graduated from Western Kentucky University in 2009 with a Bachelor of Science degree in Civil Engineering and commissioned through ROTC as an Infantry officer.

Scott is married to Major Nikki Modesitt (USAF) of Washington, PA, and they have two daughters, Emma and Nora.