Risky Business: The Global Threat Network and the Politics of Contraband 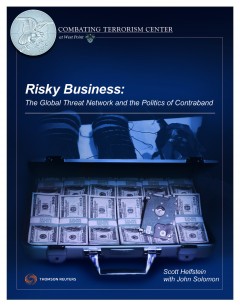 The report makes four main points that run counter to previous conceptions of crime-terror connectivity and the global illicit network.

1) Rather than operating in numerous smaller networks, the criminals and terrorists in our study are largely subsumed (98%) in a single network of 2,700 individuals with 15,000 relationships. Connectivity among actors within the illicit marketplace is relatively high. This should not be construed to say that the network is a cohesive organizational entity. Rather, the phenomenon observed and documented here is a self-organizing complex system built through social connections from the bottom up.

2) By most measures of connectivity, terrorists are more central than almost all other types of criminals, second only to narcotics smugglers. The transnational nature of some terrorist actors allows them to link disparate criminal groups. Importantly our study does not provide evidence that terrorists are shunned by criminal actors because of their ideological motivations.

3) The conventional wisdom that explains crime-terror connectivity as a product of failed or economically poor states is challenged here. Generally speaking, connectivity between terrorists and criminals is highest in resource-rich countries that have little incentive to support substate actors (comparative advantage theory) and resource-poor countries that are incentivized to support criminal or terrorist groups (augment state capabilities theory).

4) Despite the interest surrounding big data and data science, the results of data acquisition and utilization often falls short of their potential. A growing number of data sources and tools offer an opportunity to conduct analyses addressing global challenges like the crime-terror “nexus.” Advancing this agenda requires asking questions in unique ways and pursuing creative approaches and partnerships to aggregating and analyzing data.