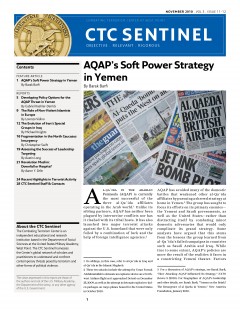 Since this transition is recent, it is too early to determine whether Revolution Muslim will follow in the footsteps of the British group al-Muhajiroun by returning to confrontation merely under a different name, or if it will follow a model closer to groups such as Hizb al-Tahrir, Tabligh Jama`at, or the Muslim Brotherhood by adopting a less hostile posture. This article recounts the factors that led to the recent demise of Revolution Muslim, while also providing  insight on its new incarnation, Islam Policy.

Leadership Disputes
Revolution Muslim was founded by Yousef al-Khattab[3] and Younes Abdullah Muhammad[4] in late 2007 and early 2008.[5] In late 2009, al-Khattab resigned as amir (leader) of Revolution Muslim, reportedly due to the radical direction that Younes was taking the group.[6] Al-Khattab subsequently promoted Abdullah as-Sayf as the new amir while Younes was away in Saudi Arabia. Upon Younes’ return to the United States in April 2010, however, he forcefully retook the reins of leadership and removed as-Sayf from the organization because of as-Sayf’s Sufi leanings. Younes designated himself as the sole amir.[7]

Exacerbating the leadership disputes, three members of the group were arrested in the United States in June and July 2010. On June 6, Carlos Eduardo Almonte and Mohamed Mahmood Alessa were apprehended while trying to leave the United States to join al-Shabab.[8] Similarly, on July 21, Zachary Chesser was arrested for the same crime.[9] Following Chesser’s arrest, Younes went “underground,” likely due to fear of further law enforcement action. While Younes was underground, British jihadists seemingly took an even greater role in the dissemination of content on the Revolution Muslim website, moving the group in an even more radical direction and eventually causing the website’s demise.

Rise of British Influence
The content on Revolution Muslim’s website could be divided into four categories: news, original articles, upcoming events, and propaganda materials. When Revolution Muslim first came online in 2008, much of its content highlighted key daily news articles, which they called Akbar al-Yawm (news of the day), along with its “Street Daw’ah” (outreach) efforts in the New York City metropolitan area. Examples of the larger “Street Daw’ah” events included boycotting Starbucks due to the company’s alleged ties with Israel, protesting the sentencing and alleged mistreatment of Aafia Siddiqui, and an outreach event in front of Wall Street following the collapse of the economy in 2008 to highlight the injustices of the capitalist system.[10] The website posted many writings from Yemeni-American cleric Anwar al-`Awlaqi, as well as speeches from Jamaican cleric Abdullah al-Faisal.

Although Revolution Muslim’s website had always featured content relevant to both the British and American Muslim extremist scenes, beginning in April 2010 that content had more of a British bent. Since April, the Revolution Muslim website highlighted 15 events and protests in Britain, in contrast to only three in the United States.[11] For example, Muslims Against Crusades, an al-Muhajiroun successor group, organized an event in Westminster titled “One Law for All…Shar’iah [sic]” in June.[12] The Muslims against Crusades also announced an “Emergency Demonstration” on the Revolution Muslim website in late July in response to an alleged report, which is not cited on the website, regarding the murder of innocent Muslims.[13] The Revolution Muslim website also started posting more content from Islam4UK and from Shaykh Omar Bakri Mohammed, the founder of al-Muhajiroun who is now exiled in Lebanon but still active with British jihadists. Additionally, only one of the three events announced in the United States were actually organized or associated with Revolution Muslim. Moreover, during this period there was no longer information or content about “Street Daw’ah” events in the New York city area.

It appears that the reason for the increase in content related to the United Kingdom is that British Muslims were using the U.S.-based Revolution Muslim website to skirt recent hate speech and incitement laws that have hampered their activities in the United Kingdom. In 2006 and 2007, British authorities passed two laws that made it increasingly difficult to distribute material that could be viewed as hate speech or incitement to crime or terrorism. The Racial and Religious Hatred Act of 2006 amended the Public Order Act of 1986 by adding Part 3A, which prohibits “a person who uses threatening words or behavior, or displays any written material which is threatening, is guilty of an offence if he intends thereby to stir up religious hatred.”[14]

Although the intent of the hate speech law was not necessarily established to curb anti-Christian or anti-Jewish rhetoric, it created an issue for British Muslim extremists who were distributing such materials on the internet.[15] Furthermore, a year and a half later, the Serious Crime Act of 2007 legislation passed, replacing the British common law crime of incitement with a statutory offense of encouraging or assisting crime.[16] Along with the former law, it became harder for al-Muhajiroun successor groups (such as Islam4UK, The Savior Sect, and al-Ghuraba) to cross the boundaries of hate speech or incitement using UK-hosted servers, as UK hosting companies apparently remove such content quickly. As a result of these laws, British Muslim extremists have used foreign web servers, including those in the United States, to disseminate their content.[17] Revolution Muslim was part of this trend.

Nevertheless, it appears that the overzealousness of British extremists helped lead to the demise of the Revolution Muslim website. On November 3, one of the website’s users, Bilal Ahmad, published a “hit list” of UK parliamentary members who voted for the war in Iraq.[18] Two days later, the Revolution Muslim website was suspended, reportedly by its hosting company at the prompting of U.S. and UK government officials.[19]

The Dawn of Islam Policy
On November 12, more than a week after the suspension of the Revolution Muslim website, Younes returned to the public spotlight. He announced the formation of a new group, Islam Policy, into which Revolution Muslim would be absorbed. Younes also said that the days of abrasive outreach activities were over, and that a new strategy had to be adopted. The suspension of the Revolution Muslim website apparently made Younes realize that he needed to take the U.S.-based extremist scene in a new direction: “I have been going through some personal alterations with regard to physical, mental and spiritual space and was eager to alter some of the approach I had been being informed of when this recent spate of bad news hit.”[20] Younes said that the Islam Policy website will focus more on educating individuals so that they can better understand the issues important to Muslims and thus make more coherent arguments to promote their ideological beliefs.

On November 20, Younes released a new treatise for Islam Policy, titled “On Crafting Islamic Policy: The Methodology of Islamic Social Science.”[21] It would be a worthwhile study for practitioners to compare this new tract with Younes’ essay titled “By All Means Necessary,” which he wrote on December 7, 2008. This might shed light on whether Islam Policy is truly breaking from Revolution Muslim or continuing that cause using innuendo and less confrontational tactics.

Conclusion
Although Revolution Muslim’s website is down and Younes seems to be taking its successor group in a new direction, the Britons who helped create Revolution Muslim are still using U.S.-hosted websites to disseminate their content.[22] This tactic could become an innovative model for other European jihadists who live in countries with strict hate speech and incitement laws.

Despite the apparent decline of Revolution Muslim and its confrontational tactics, the domestic terrorism threat to the United States has not diminished. The recent case of Somali-American Mohamed Osman Mohamud, who attempted to detonate what he believed was an explosives-laden vehicle near a tree-lighting ceremony in Portland on November 26, is demonstrative of this. Lessons from past extremist movements show that many of Revolution Muslim’s more radical followers may not agree with Younes’ seemingly less confrontational direction. Indeed, this is one reason why Almonte, Alessa, and Chesser chose to travel to Somalia to fight with Somalia’s al-Shabab. For them, fighting the jihad with words was not enough.

Aaron Y. Zelin is a research assistant in the Department of Politics at Brandeis University and maintains a blog at Jihadology.net.

[2] The United Kingdom’s policing of websites that host extremist content is much stricter than in the United States, where the First Amendment provides significant protection to extremist discourse. For example, when speaking about the extremist content of Yemeni-American cleric Anwar al-`Awlaqi, UK Baroness Neville-Jones said, “The websites in which feature his [al-`Awlaqi] terrorist message would categorically not be allowed in the UK. If they were hosted in the UK they would be taken down.” For details on that quote, see Jim Wolf, “Britain Urges U.S. to Take Down Extremist Websites,” Reuters, October 26, 2010.

[3] Yousef al-Khattab is a Jewish convert to Islam from New Jersey.

[4] Younes Abdullah Muhammad is a convert to Islam, and he reportedly received a degree in international affairs from Columbia University.

[5] According to J.M. Berger, the Revolution Muslim website domain was registered in December 2007. The website went live in January 2008 and was originally a forum, but was later changed to a blog format in April 2008.

[6] For more details, read al-Khattab’s explanation on his personal website, available at www.yousefalkhattab.com/p/why-i-left-revolution-muslim.html.

[12] Al-Muhajiroun (which now goes under other alias names) was founded by Omar Bakri Muhammad who fled London following the 7/7 attacks and was recently arrested in Lebanon. Currently, Anjem Choudary leads al-Muhajiroun and the group’s current primary alias is “Muslims Against Crusades.”

[15] The law that passed in 2006 was the third time the UK Parliament attempted to pass it into legislation. The Labor Party first tried in the 2001 Anti-Terrorism, Crime and Security Bill and later in the 2004-2005 Serious Organised Crime and Police Bill.

[18] “MPs That Voted for War on Iraq,” Revolution Muslim, November 3, 2010; Bilal Ahmad, a member of Islam4UK (a successor group to al-Muhajiroun), was arrested on November 10 for publishing the hit list post. Ahmad was charged under the The Racial and Religious Hatred Act of 2006 since his post was actionable incitement. Most cases are merely “incitement,” so the police/security services prefer monitoring the individuals since they do not represent an immediate threat. For more, see “Man Arrested over Website Listing Iraq War MPs,” BBC, November 10, 2010.

[20] “Announcement from IslamPolicy.com – on Transfer from RevolutionMuslim,” Islam Policy, November 12, 2010.

[22] To name a few, the following websites, which are based in the United Kingdom, are hosted on web servers in the United States: Salafi Media; Muslim’s Against Crusades; Izharudeen; Authentic Tawheed; and The Tawheed Movement.