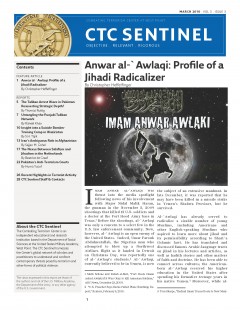 February 1, 2010 (SOMALIA): According to the Wall Street Journal, the Somali militant group al-Shabab released a statement announcing that it is aligned with al-Qa`ida. Al-Shabab also announced that it has allied with Kamboni, a smaller insurgent group based in the southern town of Ras Kamboni and led by Hassan Turki. – BBC, February 1; Wall Street Journal, February 2

February 2, 2010 (YEMEN): In an  interview with al-Jazira, Yemeni-American cleric Anwar al-`Awlaqi admitted that Umar Farouk Abdulmutallab “is one of my students” and that the two “were in correspondence.” He also said, however, that he “did not give [Abdulmutallab] a fatwa in regards to this operation,” referring to the failed Christmas Day bombing plot of a U.S. airliner near Detroit. – Washington Post, February 6

February 3, 2010 (IRAQ): A bomb on a motorcycle exploded near Karbala, killing at least 20 Shi`a pilgrims. – Voice of America, February 3

February 3, 2010 (PAKISTAN): A suicide bomber killed at least seven people, including three U.S. military personnel, in Lower Dir District of the North-West Frontier Province. According to Agence France-Presse, “It appears to be the first time American soldiers have been killed in such an attack in Pakistan.” Three Pakistani schoolgirls also died in the blast. Tehrik-i-Taliban Pakistan claimed credit for the operation. – Christian Science Monitor, February 3; BBC, February 4

February 4, 2010 (UNITED STATES): A jury in a U.S. federal court found Aafia Siddiqui guilty of trying to kill U.S. servicemen in Afghanistan. Siddiqui, a Pakistani neuroscientist trained at the Massachusetts Institute of Technology in the United States, was accused of trying to gun down a group of U.S. servicemen at an Afghan police station in July 2008. After being found guilty, she said, “This is a verdict from Israel, not America. The anger should be directed where it belongs.” – AFP, February 4

February 4, 2010 (INDIA): India’s home minister, Palaniappan Chidambaram, said that the 10 Pakistani terrorists who attacked Mumbai in November 2008 could have been guided by an Indian handler. Authorities do not have the handler in custody, nor do they know the individual’s identity. – Times of India, February 4

February 5, 2010 (IRAQ): A car bomb ripped through a group of Shi`a pilgrims in Karbala, killing 10 people. Shortly after, a suicide bomber in a vehicle detonated explosives at the first blast site, killing another 22 people. – Los Angeles Times, February 5

February 5, 2010 (PAKISTAN): Two suicide bombers killed 25 people in Karachi, located in Pakistan’s Sindh Province. The first bomber rammed an explosives-laden motorbike into a bus carrying Shi`a on one of the city’s busiest roads, killing 12 people. Two hours later, the second bomber detonated his explosives at the entrance to the casualty department at Jinnah Hospital, where families of the victims hurt in the first blast had gathered; 13 people died in the second blast. According to a senior police official, “The perpetrators knew Jinnah Hospital was the nearest to the site of the first attack and ensured a follow-up attack when they saw significant numbers of people gathered there.” – AFP, February 5; RIA Novosti, February 6

February 5, 2010 (NORTH AFRICA): Al-Qa`ida in the Islamic Maghreb (AQIM) said that it will extend its deadline for French captive Pierre Camatte until February 20. In exchange for Camatte’s release, AQIM is demanding that the French and Mali governments release four AQIM militants held in Mali. – AFP, February 5

February 6, 2010 (YEMEN): Yemeni authorities announced that they recently arrested a man in Sana`a who threatened to blow up foreign embassies and assassinate Yemeni leaders. The announcement did not state whether the man was a member of al-Qa`ida. – AFP, February 6

February 8, 2010 (PAKISTAN): Pakistani authorities arrested six suspected Taliban militants who were allegedly about to attack the five-star Pearl Continental hotel in Lahore, the capital of Punjab Province. The six suspected militants were armed with a suicide vest and 26 hand grenades, and they were supposedly hoping to kill Americans. – AP, February 9

February 8, 2010 (YEMEN): Said Ali al-Shihri, the deputy leader of al-Qa`ida in the Arabian Peninsula (AQAP), purportedly released a new audio statement calling on Muslims in the region to attack the United States and its allies. During the speech, al-Shihri praised Umar Farouk Abdulmutallab’s “glorious invasion,” referring to the failed Christmas Day bombing attempt against a U.S. airliner near Detroit. Al-Shihri is a former inmate at the U.S. detention facility at Guantanamo Bay. – BBC, February 8; Washington Post, February 8

February 10, 2010 (ISRAEL): Palestinian security forces said they recently arrested a suspected cell of al-Qa`ida sympathizers in the West Bank. According to a Palestinian security official, “They considered themselves part of Al-Qaeda but did not have any contacts with Al-Qaeda leaders abroad.” The men were apparently carrying out military training, but had not yet chosen a target to attack. – AFP, February 10

February 10, 2010 (PHILIPPINES): Philippine police announced that they recently arrested Sukri Hassan Itauris, an alleged Abu Sayyaf Group militant involved in the kidnappings of 20 tourists, including three Americans, from a Philippine resort in 2001. He was arrested in Basilan Province. – Philippine Star, February 10

February 11, 2010 (AFGHANISTAN): A suicide bomber detonated his explosives at a joint Afghan-U.S. military base in Pathan district of Paktia Province, wounding five U.S. soldiers. The bomber was wearing an Afghan border police uniform, and the Taliban later claimed that the bomber was in fact a Taliban fighter who also served as a police officer. – New York Times, February 12

February 11, 2010 (YEMEN): Yemen’s president announced that a cease-fire has been achieved with the country’s northern rebels. According to the Associated Press, “After years of sporadic fighting with the [northern] militants, Yemen has come under international pressure to quickly draw a close to the war and free up resources to confront a separate threat from an al-Qaida offshoot that has set up operations there over the past year.” – AP, February 11

February 12, 2010 (IRAQ): The leader of the Islamic State of Iraq, Abu `Umar al-Baghdadi, threatened the upcoming March 7 elections in Iraq, warning that “[we] have decided to prevent the elections by all legitimate means possible, primarily by military means.” – AFP, February 12

February 13, 2010 (INDIA): A bomb ripped through a bakery in a neighborhood popular with foreign tourists in the western city of Pune. The explosion killed at least 12 people. – New York Times, February 13; AFP, February 20

February 17, 2010 (CANADA): Said Namouh, a Moroccan-born man from Quebec who plotted international terrorist attacks with a group tied to al-Qa`ida, was sentenced to life in prison by a Canadian judge. – Canadian Press, February 17

February 18, 2010 (PAKISTAN): A bomb ripped through a mosque in Khyber Agency of the Federally Administered Tribal Areas, killing at least 29 people.       – AP, February 18

February 19, 2010 (YEMEN): The U.S. government has approved $150 million in military assistance to Yemen, which will pay for military equipment and training for Yemeni forces. – AP, February 22

February 22, 2010 (GLOBAL): Al-Qa`ida second-in-command Ayman al-Zawahiri purportedly released a new audiotape criticizing Turkey. The recording said, “The Turkish troops will carry out the same operations in Afghanistan that the Jews are carrying out in Palestine, so how would the pious, free Turkish Muslim people accept such a crime against Islam and the Muslims?” – CNN, February 22

February 22, 2010 (AFGHANISTAN): A suicide bomber assassinated Hajji Zaman Ghamsharik, a prominent Afghan warlord, near Jalalabad in Nangarhar Province. The Taliban denied responsibility. According to the New York Times, Ghamsharik was “accused of helping Osama bin Laden escape from the Americans at Tora Bora,” and he had “so many enemies that his assassination…came as no particular surprise.” A number of civilians were also killed in the blast. – New York Times, February 22

February 23, 2010 (INDONESIA): Indonesian police arrested four suspected militants in a major raid on a terrorist training camp in remote Aceh Province. More than 50 militants were using the camp, and police “strongly” suspect that the men belong to Jemaah Islamiya. Most of the militants escaped into the jungle.     – AFP, February 23

February 25, 2010 (AFGHANISTAN): The Afghan flag was raised over Marja as part of a major coalition offensive in the region that began on February 13. Marja is located in Helmand Province. – CNN, February 26

February 26, 2010 (AFGHANISTAN): Taliban fighters launched a coordinated assault on Kabul, killing at least 16 people. As part of the attack, three suicide bombers attacked the Park Residence Hotel and the Aria Guesthouse nearby, and it appears that Indians were targeted. An Italian diplomat, a French filmmaker and at least six Indians were among the dead. – Bloomberg, February 26; Times, February 27

February 27, 2010 (PAKISTAN): A suicide bomber from the Pakistani Taliban detonated a car laden with explosives at the gate of the main police station in Karak, located in the North-West Frontier Province. Four people were killed. – Voice of America, February 27; Dawn, February 28

February 28, 2010 (GLOBAL): A posthumous video message appeared on jihadist websites from Humam Khalil Abu Mulal al-Balawi, the al-Qa`ida double agent who killed seven CIA operatives and a Jordanian spy on December 30, 2009. In the video, al-Balawi said, “We planned for something but got a bigger gift, a gift from Allah, who brought us, through His accompaniment, a valuable prey: Americans, and from the CIA. That’s when I became certain that the best way to teach Jordanian intelligence and the CIA a lesson is with the martyrdom belt.” – AP, February 28