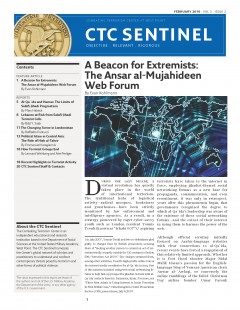 January 1, 2010 (DENMARK): A Somali man broke into the home of Kurt Westergaard, the Danish cartoonist whose caricature of the Prophet Muhammad was published by Jyllands-Posten in 2005. The Somali man, who is a Danish resident, was carrying an axe and a knife, and Danish authorities claim that he was an assassin with links to the Somali insurgent and terrorist group al-Shabab. He was shot and wounded by police before he could reach Westergaard, who was home at the time. – The Observer, January 3; AFP, January 2; New York Times, January 3

January 1, 2010 (PAKISTAN): A suicide bomber detonated an explosives-laden vehicle amid a crowd of spectators watching a volleyball game in Lakki Marwat District of the North-West Frontier Province. The bombing killed 101 people. – AFP, January 3

January 7, 2010 (AFGHANISTAN): A suicide bomber killed 10 people in Gardez, the capital of Paktia Province. The target of the attack, pro-government militia commander Nasir Paray, was killed in the blast. – New York Times, January 7

January 8, 2010 (UNITED STATES): Two alleged associates of Najibullah Zazi, an Afghan immigrant charged with plotting a series of bombings in New York, were arrested. The two men have been identified as Zarein Ahmedzay and Adis Medunjanin. – AFP, January 8

January 8, 2010 (PAKISTAN): An accidental explosion killed eight suspected militants at a safe house in Karachi. Authorities suspect that the explosives—which included suicide jackets—were being stored in the building for future terrorist attacks. The safe house was located in Baldia district, an area of Karachi that is primarily home to Pashtun migrants from Pakistan’s northwest. – Wall Street Journal, January 8

January 14, 2010 (UNITED STATES): Tahawwur Hussain Rana was indicted by a U.S. grand jury for his alleged role in the 2008 terrorist attacks in Mumbai, India. Rana was charged with providing material support to both the Mumbai attacks and to Lashkar-i-Tayyiba, the Pakistani terrorist group believed responsible for the operation. Rana also faces other charges, such as conspiring to attack a Danish newspaper for publishing caricatures of the Prophet Muhammad. – National Post, January 14

January 14, 2010 (JORDAN): A roadside bomb exploded next to a convoy of vehicles carrying Israeli diplomats in Jordan, yet there were no injuries. – Wall Street Journal, January 15

January 15, 2010 (YEMEN): Yemeni forces killed six alleged al-Qa`ida militants in an airstrike near the Saudi Arabian border. The airstrike targeted two vehicles on the border between the Yemeni provinces of Saada and al-Jawf. Authorities believe that Qasim al-Raymi, the military chief of al-Qa`ida in the Arabian Peninsula, was among the dead. – Washington Post, January 16; Voice of America, January 15

January 17, 2010 (PAKISTAN): A U.S. unmanned aerial drone killed 15 people in the Shaktu area of South Waziristan Agency in the Federally Administered Tribal Areas. The strikes targeted a compound owned by a member of the Mehsud tribe. – New York Times, January 17

January 18, 2010 (CANADA): Zakaria Amara, the ringleader of the so-called “Toronto 18” terrorist cell, was sentenced to life in prison. The 2006 plot involved detonating truck bombs outside the Toronto Stock Exchange, the Toronto offices of Canada’s spy agency, and an Ontario military base. The plot was disrupted by Canadian authorities. – ABC News, January 18

January 21, 2010 (IRAQ): A suicide bomber blew up a truck near an Iraqi military base in Baaj, Ninawa Province. One Iraqi soldier was wounded. – Reuters, January 22

January 22, 2010 (IRAQ): U.S. military forces killed Abu Khalaf, identified as a senior al-Qa`ida operative and a facilitator for the transit of foreign fighters from Syria into Iraq. He was killed in Mosul, Ninawa Province. – UPI, January 28

January 23, 2010 (AFGHANISTAN): Taliban militants attempted to kill the governor of Wardak Province by setting off a hidden bomb as he traveled to a school building inspection. The governor escaped injury, but four of his Afghan military guards were killed. – New York Times, January 23

January 23, 2010 (PAKISTAN): A suicide bomber attacked a police station in Gomal, located south of Tank in the North-West Frontier Province. At least five people were killed by the blast. – RIA Novosti, January 23

January 24, 2010 (GLOBAL): Usama bin Ladin purportedly released a new audiotape claiming credit for the December 25, 2009 attempted bombing of a commercial airliner in the United States. The statement read, “The message delivered to you through the plane of the heroic warrior Umar Farouk Abdulmutallab was a confirmation of the previous messages sent by the heroes of the September 11. America will never dream of security unless we will have it in reality in Palestine. God willing, our raids on you will continue as long as your support for the Israelis continues.” – BBC, January 24; Australian, January 25

January 26, 2010 (AFGHANISTAN): A bomb exploded outside the main gate at Camp Phoenix, a U.S. military base on the outskirts of Kabul. There were no confirmed reports of fatalities, although Taliban spokesman Zabiullah Mujahid claimed that the bomb killed 25 soldiers. – CNN, January 26; New York Times, January 26

January 27, 2010 (PAKISTAN): The body of anti-Taliban militia leader Malik Manaris Khan was found in Bajaur Agency of the Federally Administered Tribal Areas. Khan, who was kidnapped on January 25, had been shot to death. – AFP, January 27

January 27, 2010 (MALAYSIA): Authorities in Malaysia announced the detention of 10 people with suspected ties to international terrorist groups, including Jemaah Islamiya. Nine of the 10 detained individuals are foreigners.  – Reuters, January 27

January 29, 2010 (AFGHANISTAN): Taliban fighters, disguised in Afghan Army and police uniforms, launched an assault on United Nations and government buildings in Lashkar Gah, the capital of Helmand Province. At least five militants were killed, along with one civilian. The attack was similar to the January 18 coordinated Taliban assault in Kabul. – al-Jazira, January 30; New York Times, January 29

January 30, 2010 (IRAQ): A suicide bomber detonated his explosives at a restaurant in Samara, Salah al-Din Province, killing at least two people. The restaurant was reportedly popular among Iraqi police. – Voice of America, January 30