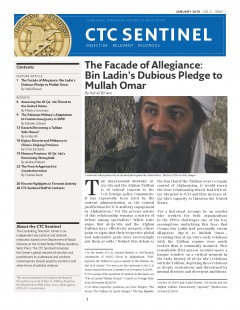 December 1, 2009 (UNITED STATES): U.S. President Barack Obama announced that 30,000 additional U.S. troops would be deployed to Afghanistan as part of the administration’s strategy to stabilize the country by reversing Taliban “momentum.” The troops would also prevent al-Qa`ida from establishing a safe haven. President Obama said that the troops would be deployed starting in early 2010 “with a goal of starting to withdraw forces from the country in July 2011.” – CNN, December 2

December 1, 2009 (PAKISTAN): A suicide bomber killed a provincial politician, Shamsher Ali Khan, in the Swat Valley. Khan was a member of the Awami National Party. The bomber reportedly walked unchallenged into the grounds of Khan’s house and then detonated his explosives. – al-Jazira, December 2

December 2, 2009 (UNITED STATES): U.S. Homeland Security Secretary Janet Napolitano warned, “Individuals sympathetic to al-Qaeda and its affiliates, as well as those inspired by their ideology, are present in the U.S., and would like to attack the homeland or plot overseas attacks against our interests abroad.”        – Washington Post, December 3

December 2, 2009 (PAKISTAN): A suicide bomber detonated his explosives at a security checkpoint outside Pakistan’s naval headquarters in the heart of Islamabad. Two naval personnel were killed in the blast. – Bloomberg, December 2; BBC, December 2; Dawn, December 4

December 2, 2009 (PAKISTAN): The mayor of Karachi said that the city is the “revenue engine for the Taliban.” Mayor Syed Mustafa Kamal told Reuters, “People are being kidnapped here in Karachi and the ransom is taken in Waziristan.”               – Reuters, December 2

December 2, 2009 (SOMALIA): Abdinasir Seraar, the spokesman for the leader of the Ras Kamboni insurgent faction in Somalia, said that the group now considers al-Shabab to be the greatest threat to the country. The Ras Kamboni faction is part of the Somali insurgent coalition Hisbul Islamiyya, which has previously allied itself with al-Shabab. This relationship, however, has been increasingly strained. Al-Shabab, a major insurgent group in Somalia, is linked to al-Qa`ida. – Voice of America, December 2

December 3, 2009 (IRAQ): A suicide bomber killed the head of Salah al-Din Province’s anti-terrorism squad in Tikrit. Lieutenant-Colonel Ahmed al-Fahel died in the blast, along with three of his bodyguards. – AFP, December 3

December 3, 2009 (SOMALIA): A suicide bomber struck a graduation ceremony for medical students at the Shamo Hotel in Mogadishu, killing three cabinet ministers and at least 16 other people. The bomber was disguised as a veiled woman. No group claimed responsibility for the attack, although authorities blamed al-Shabab. An al-Shabab spokesman denied that the group was involved. – Los Angeles Times, December 4; Independent, December 4; AP, December 5

December 7, 2009 (IRAQ): A bomb ripped through a school for boys in Baghdad’s Shi`a district of Sadr City, killing at least eight people. Among the dead were reportedly six children between the ages of six and 12. – al-Jazira, December 7

December 7, 2009 (PAKISTAN): A suicide bomber killed 10 people outside a courthouse in Peshawar, the capital of the North-West Frontier Province. – AP, December 8

December 8, 2009 (PAKISTAN): A U.S. unmanned aerial drone killed Salah al-Somali in Pakistan. Al-Somali was identified as the head of al-Qa`ida’s operations outside of Afghanistan and Pakistan. U.S. officials took credit for the operation, saying that al-Somali was on the Central Intelligence Agency’s list of the top 20 al-Qa`ida targets. – Wall Street Journal, December 12

December 8, 2009 (NORTH AFRICA): Al-Qa`ida in the Islamic Maghreb claimed credit for the November kidnappings of three Spanish aid workers in Mauritania, and the kidnapping of French national Pierre Kamat in Mali. – Voice of America, December 8

December 9, 2009 (PAKISTAN): Pakistani authorities arrested five Muslim-American men in Sargodha, a major city in Punjab Province, on suspicion of having ties to Pakistani extremist groups. The men, who are all from the Washington D.C. suburbs, were allegedly on their way to North Waziristan Agency for training with the Taliban and al-Qa`ida. It appears that the men used the internet—including Facebook and YouTube—to connect with extremist groups in Pakistan. The men were reportedly recruited on the internet by a man identified as “Saifullah,” who authorities in Pakistan are trying to find. – New York Times, December 10; NPR, December 11; Washington Post, December 13

December 11, 2009 (AFGHANISTAN): A suicide bomber detonated his explosives on a busy street in Paktika Province, killing three people. One of the dead was a policeman. – AFP, December 11

December 13, 2009 (PHILIPPINES): Approximately 70 suspected Islamic militants broke through a concrete wall and then stormed into a jail in the southern Philippines, freeing 31 inmates. At least five of the escaped militants were members of the Moro Islamic Liberation Front and 12 were from the Abu Sayyaf Group. – The Scotsman, December 14

December 14, 2009 (SPAIN): A Spanish court convicted 11 Islamic militants of membership in a terrorist group. The court, however, acquitted the men of a “specific” conspiracy to attack Barcelona’s metro subway system in January 2008. The judges found that the “Barcelona plot” had “not advanced sufficiently” to be considered a crime of conspiracy under Spanish law. – CNN, December 14

December 15, 2009 (AFGHANISTAN): A suicide bomber in a vehicle killed at least eight people near a hotel in the Wazir Akbar Khan district in Kabul. – BBC, December 15

December 15, 2009 (PAKISTAN): A suicide bomber rammed his vehicle into the outer wall of a provincial minister’s home in Punjab Province, killing at least 20 people. The lawmaker, Zulfiqar Khosa, was not at home during the time of the attack. – Bloomberg, December 15

December 17, 2009 (GLOBAL): A wife of Ayman al-Zawahiri, Omaima Hassan, purportedly released a message to Muslim women urging them to “raise your children to obey Allah and love jihad and to defend the Muslim lands.” The message further said, “Fighting is not easy for women because they need a male guardian by their side…But we can place ourselves in service of the mujahidin and do what they ask of us. We can help by supporting warriors with money or information or even by a martyrdom operation.” – CNN, December 17

December 17, 2009 (PAKISTAN): A suicide bomber detonated his explosives at the home of a local political leader in Bannu District of the North-West Frontier Province. The bomber was the only casualty. – AFP, December 17

December 17, 2009 (RUSSIA): A suicide bomber in a vehicle targeted a group of policemen at a checkpoint in the city of Nazran, located in Ingushetia. The explosion wounded seven officers. – AP, December 17

December 18, 2009 (UNITED STATES): Three suspected members of al-Qa`ida in the Islamic Maghreb arrived in New York to be charged with plotting to transport drugs through the Sahara desert to raise money for terrorist attacks. The men, all apparently from Mali, were arrested by local authorities in Ghana in the past week and then turned over to U.S. agents. – AP, December 18

December 18, 2009 (PAKISTAN): A suicide bomber in a vehicle attacked a mosque next to a police headquarters in Lower Dir District of the North-West Frontier Province. At least 11 people were killed by the explosion. – Los Angeles Times, December 19

December 18, 2009 (MAURITANIA): An Italian couple was kidnapped by gunmen in Mauritania. On December 27, al-Qa`ida in the Islamic Maghreb claimed responsibility for the kidnapping. – AP, December 19; Reuters, December 28

December 23, 2009 (INDIA): Indian Home Minister P. Chidambaram said that “twelve to 13 terror attacks [in India] were neutralized in 2009 which could have been like Mumbai.” – AFP, December 23

December 24, 2009 (PAKISTAN): A suicide bomber detonated explosives outside a Shi`a shrine on the main road from Islamabad to the international airport, killing a six-year-old girl. – AFP, December 24

December 25, 2009 (UNITED STATES): Umar Farouk Abdulmutallab, a Nigerian, attempted to blow up Northwest Airlines Flight 253 en route from Amsterdam to Detroit, Michigan. His explosives did not detonate properly, allowing passengers to subdue him. Al-Qa`ida in the Arabian Peninsula claimed credit for the failed attack. – AFP, December 26

December 25, 2009 (AFGHANISTAN): The Taliban released a video showing Bowe Bergdahl, a U.S. soldier captured by insurgents on June 30, 2009. According to the Los Angeles Times, “Bergdahl had not been heard from since July 19, nearly three weeks after his capture.” – Los Angeles Times, December 25

December 27, 2009 (PAKISTAN): Militants blew up the home of a government official in Kurram Agency of the Federally Administered Tribal Areas, killing the official and five members of his family. Sarbraz Saddiqi, his wife and four children died while sleeping when the house was destroyed with dynamite. – BBC, December 27

December 29, 2009 (INDIA): The U.S. government issued an alert for Americans traveling to India, stating, “The US government continues to receive information that terrorist groups may be planning attacks in India.” – AFP, December 29

December 30, 2009 (IRAQ): A car bomb and a suicide bomber exploded at a government building in Ramadi, killing at least 27 people and wounding the Anbar Province governor. – Financial Times, December 31

December 30, 2009 (YEMEN): Yemeni authorities arrested Mohammed Abdu Saleh al-Haudali, who they identified as “one of the most dangerous terrorists wanted by the security forces.” – CNN, December 31

December 31, 2009 (PAKISTAN): The United Nations announced that it will withdraw some of its staff from Pakistan, citing increased safety concerns as a result of Taliban attacks. – Reuters, December 31