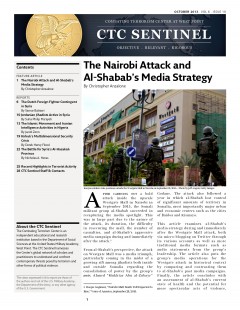 September 2, 2013 (AFGHANISTAN): Taliban militants torched a number of NATO supply trucks and then attacked part of a U.S. military outpost in Nangarhar Province. Three insurgents were killed. Officials said that no Afghan or U.S. soldiers died in the attack. – Reuters, September 2; BBC, September 2

September 2, 2013 (SOMALIA): U.S. citizen Omar Hammami told Voice of America that while he still considers himself a terrorist, he is no longer a member of the Somali militant group al-Shabab or al-Qa`ida. Hammami, who has been indicted by a federal grand jury in the United States, said that al-Shabab’s leader, Ahmed Godane, is trying to kill him. Hammami, a 29-year-old from Alabama, is wanted by the U.S. government for providing material support to al-Shabab, an al-Qa`ida affiliate. – Voice of America, September 5

September 3, 2013 (IRAQ): Gunmen entered the house of a Sunni, pro-government militia member in southern Baghdad and beheaded him, as well as his wife and three children. – Reuters, September 3

September 5, 2013 (EGYPT): A suspected suicide bomber in a vehicle attacked the convoy of Egyptian Interior Minister Mohammed Ibrahim in Cairo, wounding seven people. Ibrahim was not injured in the attack. The Egyptian terrorist group Ansar Bayt al-Maqdis, which is based in the Sinai Peninsula, claimed responsibility. – AP, September 6; CBS, September 9

September 7, 2013 (AFGHANISTAN): The Taliban said that they released an Afghan female member of parliament held hostage since August 10 in exchange for the release of six prisoners. The released prisoners—four women and two children—were family members of Taliban fighters. – AFP, September 7

September 10, 2013 (NORTH AFRICA): A new video of Mokhtar Belmokhtar emerged, ending speculation over whether he was killed in March 2013. Belmokhtar, the leader of the terrorist group behind the attack on the Ain Amenas gas plant in Algeria in January 2013 that left 37 foreign workers dead, retains links with al-Qa`ida even though he is no longer a member of the group’s Africa affiliate, al-Qa`ida in the Islamic Maghreb. According to CBS News, “The new video shows the one-eyed leader of the ‘Signatories with their Blood’ group, Belmokhtar, chatting with another prominent jihadist, Abdel Hamid Abou Zaid, who was also said by the French to have been killed during confrontations with their forces in northern Mali earlier in the year.” – CBS, September 10

September 10, 2013 (IRAQ): A series of bombings targeting both Shi`a and Sunni Muslims in Iraq killed at least 20 people. – Reuters, September 10

September 11, 2013 (GLOBAL): Somalia’s al-Shabab militant group, which is an al-Qa`ida affiliate, released a series of posts on Twitter celebrating the anniversary of the 9/11 attacks on the United States. The militants vowed that the mujahidin will “continue with their jihad against the West until the world is ruled by one sovereign state, an Islamic state.” – AFP, September 11

September 11, 2013 (IRAQ): A suicide bomber detonated explosives in a crowd of Shi`a worshippers at a mosque in Baghdad, killing at least 30 people. Another man wearing a suicide vest, who apparently planned to attack police when they arrived in response to the first blast, was arrested nearby. – CNN, September 11

September 11, 2013 (LIBYA): A car bomb exploded near Libya’s Foreign Ministry building in Benghazi, exactly one year after an attack in the same city that killed the U.S. ambassador and three other Americans. In the latest attack, there were no serious casualties. – Washington Post, September 11

September 11, 2013 (SYRIA): According to reports, an Australian jihadist, known as Abu Asma al-Australi, drove an explosives-laden truck into a Syrian military checkpoint close to the Deir al-Zour military airport. It is not clear how many people died in the explosion, although jihadist websites claimed that 35 Syrian soldiers were killed. Al-Australi fought for the al-Qa`ida-linked Jabhat al-Nusra. – Australian Broadcasting Corporation, September 14; Sydney Morning Herald, September 14

September 12, 2013 (SOMALIA): Omar Hammami, a U.S.-born former member of al-Shabab, was killed in a firefight with al-Shabab militants in Somalia. Hammami, who referred to himself as a “former poster boy” of al-Shabab, accused its leader, Ahmed Godane, of betraying al-Qa`ida’s East Africa operative Fazul Abdullah Muhammad, who was killed in 2011. In recent months, Hammami wrote on his Twitter account that al-Shabab was trying to kill him. – AFP, September 12

September 12, 2013 (SYRIA): The Islamic State of Iraq and the Levant (ISIL) declared an offensive against the Faruq and Nasr battalions, two fellow rebel factions fighting against the Syrian government of Bashar al-Assad. The ISIL said that the two rebel groups attacked its forces and suggested that they may have collaborated with the Syrian regime. – Reuters, September 13

September 12, 2013 (PHILIPPINES): The Abu Sayyaf Group and the newly-formed Bangsamoro Islamic Freedom Fighters combined forces to attack government troops in Lamitan in the southern Philippines. Three soldiers were wounded in the attack. According to the New York Times, “The violence raised fears of a widening of the insurgent threat in the area, where the government has for decades been struggling to contain attacks by Muslim-led groups.” – New York Times, September 12

September 13, 2013 (GLOBAL): Al-Qa`ida chief Ayman al-Zawahiri released a new audio message marking the 12th anniversary of the 9/11 attacks on the United States. Al-Zawahiri called for more acts of “lone wolf” terrorism against the United States. He said, “We must bleed America economically by provoking it, so that it continues its massive expenditures on security…Keeping America in a state of tension and anticipation does not cost us anything but [organizing] dispersed strikes here and there.” Al-Zawahiri further specified, “These dispersed strikes can be carried out by one brother, or a small number of brothers.” Separately, al-Zawahiri urged restraint in attacking other Muslim sects and non-Muslims, and in starting wars in countries where jihadists have a safe base to organize. “As far as targeting the proxies of America is concerned, it differs from place to place,” he said. “The basic principle is to avoid entering into any conflict with them, except in the countries where confronting them becomes inevitable.” – BBC, September 13; Reuters, September 16

September 13, 2013 (AFGHANISTAN): Two suicide bombers in vehicles attacked the U.S. Consulate in Herat Province. After the explosions, Taliban militants on foot engaged in a firefight with Afghan security forces around the compound. At least seven militants died, while at least two Afghans were killed. – AP, September 13

September 14, 2013 (AFGHANISTAN): A suicide bomber in a vehicle killed at least three civilians near Kandahar in southern Afghanistan. – RFE/RL, September 14

September 14, 2013 (YEMEN): Al-Qa`ida in the Arabian Peninsula confirmed that a U.S. drone strike killed one of its leaders, Qaid al-Dahab, at the end of August 2013. He was killed in Bayda Province. – AP, September 15

September 15, 2013 (PAKISTAN): A roadside bomb killed a Pakistani general and another officer in Upper Dir District of Khyber Pakhtunkhwa Province. The officers were visiting a military outpost near the border with Afghanistan. The Pakistani Taliban claimed responsibility. – Reuters, September 15

September 18, 2013 (SYRIA): The Islamic State of Iraq and the Levant (ISIL) overran the Syrian town of Azaz, two miles from the Turkish border. According to one activist, fighting broke out among rebel groups after a Free Syrian Army unit refused to allow the ISIL to abduct a German doctor working as a volunteer at a private hospital in Azaz. – Reuters, September 18

September 18, 2013 (JORDAN): A Jordanian military tribunal jailed six men for trying to join the al-Qa`ida-linked Jabhat al-Nusra rebel group in Syria. According to a Jordanian official, “The convicts, arrested in December as they tried to cross the border, were charged with carrying out acts that would expose Jordan and its citizens to the risk of acts of aggression and revenge.” – AFP, September 18

September 19, 2013 (UNITED STATES): According to the Washington Post, “A U.S. Army veteran accused of fighting alongside a Syrian rebel group linked to al-Qa`ida and charged with conspiracies that could have landed him in prison for life pleaded guilty Thursday to a less onerous count and was given a sentence of ‘time served.’” Eric Harroun, of Phoenix, was arrested in March 2013, and he apparently admitted he worked alongside Jabhat al-Nusra, an al-Qa`ida-linked rebel group. – Washington Post, September 19; CNN, September 20

September 20, 2013 (SYRIA): Hundreds of rebels pledged allegiance to the al-Qa`ida-affiliated groups Jabhat al-Nusra and the Islamic State of Iraq and the Levant in northern and eastern Syria. – Reuters, September 20

September 21, 2013 (PAKISTAN/AFGHANISTAN): Pakistan’s Foreign Ministry confirmed that Mullah Baradar, a founder of the Afghan Taliban and its former military commander, has been released by authorities in Pakistan to improve the chances for peace talks. – Telegraph, September 21

September 22, 2013 (IRAQ): A suicide bomber detonated his explosives inside a tent full of mourners in a predominately Sunni district of Baghdad, killing at least 16 people. – Reuters, September 22

September 22, 2013 (PAKISTAN): Two suicide bombers detonated their explosives outside an Anglican church after the Sunday service in Peshawar, killing at least 78 people. It marked the deadliest attack in recent history on Christians in Pakistan. – Australian Broadcasting Corporation, September 23

September 22, 2013 (SYRIA): Clashes among rebel groups in Syria resulted in the death of a local leader of the Islamic State of Iraq and the Levant (ISIL). The leader, Abu Abdullah al-Libi, was the amir of the ISIL in Idlib Province. – AFP, September 22

September 25, 2013 (SYRIA): The Democratic Union Party (PYD), a Kurdish militia based in Syria, killed seven rebels from al-Qa`ida’s Islamic State of Iraq and the Levant in Atma, a town on the Turkish border. – Reuters, September 26

September 25, 2013 (NIGERIA): Boko Haram leader Abubakar Shekau appeared in a new video, boasting of his invincibility and promised that there would be “no democracy in Nigeria.” Shekau, who was supposedly killed in a gun battle in June, said, “It was said that I was killed, but here I am; I deliberately refused to respond on time; but here I am talking and laughing at Nigerian authority who misled the world that I am dead.” He further said, “The concept of government of the people by the people, for the people cannot continue to exist. It shall soon, very soon, be replaced by ‘Government of Allah, by Allah for Allah.’” – Daily Post, September 25; UPI, September 25

September 28, 2013 (MALI): A suicide bomber in a vehicle killed at least two people near a military camp in Timbuktu. Al-Qa`ida in the Islamic Maghreb claimed responsibility. – Voice of America, September 30

September 29, 2013 (IRAQ): Militants launched a coordinated suicide and car bomb attack at the entrance to a Kurdish security service headquarters in Erbil, killing six people. It was the first major assault in the Kurdistan region since 2007. – AFP, September 29; Reuters, September 29

September 30, 2013 (UNITED STATES): A U.S. court sentenced Sabirhan Hasanoff to 18 years in prison for aiding al-Qa`ida. Hasanoff, an accountant living in New York, scoped out the New York Stock Exchange as a potential target for al-Qa`ida in 2008. – Reuters, September 30