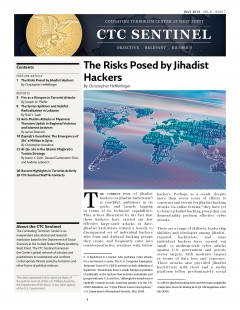 June 1, 2013 (UNITED STATES): Al-Qa`ida in the Arabian Peninsula (AQAP) released a new six-minute, English-subtitled audio message addressed “to the American People.” The message said, “The Boston events…and the poisoned letters [sent to the White House], regardless of who is behind them, show that your security is no longer under control, and that attacks on you have taken off and cannot be stopped. Everyday you will be hit by the unexpected and your leaders will not be able to defend you.” Qasim al-Raymi, who read the statement, is AQAP’s military chief. – Sky News, June 2; CBS/AP, June 2

June 1, 2013 (IRAQ): The Iraqi Defense Ministry said that they foiled a plot by an al-Qa`ida cell to execute poison gas attacks in the Middle East, Europe and North America. The militants may have been planning to use remote-controlled toy planes to distribute the gas. Iraqi officials said that they arrested five suspects who had been using three facilities in Iraq to try to produce sarin and mustard gas using instructions from another al-Qa`ida group. The cell, however, had not yet been able to produce any lethal chemical agents. – Fox News, June 1; BBC, June 1

June 2, 2013 (SYRIA): A car bomb exploded near a police station in Jubar district of Damascus, killing at least eight Syrian security forces. It was not clear which group was behind the attack, but the Syrian Observatory for Human Rights suspected that it had been carried out by Jabhat al-Nusra, an al-Qa`ida-linked Salafi-jihadi militant group. – France24, June 2

June 2, 2013 (YEMEN): A suicide bomber tried to drive an explosives-laden vehicle into a gas pumping station in the southern port city of Balhaf, but gunfire from Yemeni guards detonated the vehicle prematurely. Besides the bomber, there were no casualties and the gas facility was unaffected. – Reuters, June 2

June 3, 2013 (INDONESIA): A suicide bomber on a motorbike detonated his explosives at a police compound in Poso in Central Sulawesi, killing only himself. A police source told Agence France-Presse that the bomber was suspected of being part of an Islamist terrorist group led by Santoso, Indonesia’s most wanted militant. – Australian Broadcasting Corporation, June 3; AFP, June 3

June 4, 2013 (MALI): A suicide bomber blew himself up in the northern Mali city of Kidal after being chased by authorities. The bomber was the only casualty. – Voice of America, June 4; Reuters, June 4

June 5, 2013 (IRAQ): Gunmen ambushed a bus and executed 15 passengers on a desert road between Anbar Province and Karbala. The dead included 10 border police and five local residents. Authorities blamed al-Qa`ida in Iraq for the attack, saying, “Those terrorists hunt people along this road and kill according to religious sect.” – Reuters, June 5

June 5, 2013 (SYRIA): Syrian troops and Hizb Allah fighters captured the strategic border down of Qusayr from anti-government rebels. According to Voice of America, “the rebels had held Qusayr for more than a year in their overall struggle to topple the government of President Bashar al-Assad. Its loss to government forces represented a major blow to rebels, whose most effective fighting units, the al-Qa`ida-linked al-Nusra Front [Jabhat al-Nusra], were defending the town.” – Voice of America, June 5

June 6, 2013 (RUSSIA/SYRIA): The head of the Russian security service, the FSB, said that approximately 200 Russian Islamists who support North Caucasus insurgents are fighting in Syria for al-Qa`ida. “The fact that around 200 fighters from Russia are fighting on the side of the Caucasus Emirate under the flag of al-Qa`ida and other related structures provokes concern in Russia,” FSB chief Alexander Bortnikov said. – AFP, June 6

June 7, 2013 (IRAQ): A suicide bomber in an explosives-laden vehicle targeted a convoy of buses carrying Iranian Shi`a pilgrims near Muqdadiya, killing at least nine of them. – RFE/RL, June 7; BBC, June 7

June 7, 2013 (PAKISTAN): A U.S. drone reportedly killed six suspected militants in the Shawal area of North Waziristan Agency in the Federally Administered Tribal Areas. Pakistan’s Dawn newspaper said that it was the “first such attack since Nawaz Sharif was sworn in as prime minister this week.” – Dawn, June 8

June 9, 2013 (IRAQ/SYRIA): Al-Jazira claimed to have obtained a copy of a letter from al-Qa`ida chief Ayman al-Zawahiri addressed to the leaders of the Syria-based Jabhat al-Nusra and the Iraq-based Islamic State of Iraq (ISI). In the letter, al-Zawahiri said that ISI chief Abu Bakr al-Baghdadi was “wrong” to declare a merger between the ISI and Jabhat al-Nusra, adding that al-Baghdadi’s rule was limited to Iraq. Al-Baghdadi had appeared to unilaterally announce the merger of the two groups in April 2013, but was rebuffed by Jabhat al-Nusra, which said that they pledge allegiance to Ayman al-Zawahiri but that they would not merge with the ISI. – al-Jazira, June 9; Voice of America, June 10

June 10, 2013 (IRAQ): Two car bombs exploded and a suicide bomber in another vehicle detonated his explosives at a produce market in Jadidat al-Shatt in Diyala Province. The three bombs killed at least 13 people. – RFE/RL, June 10

June 15, 2013 (IRAQ/SYRIA): The head of the Islamic State of Iraq (ISI), Abu Bakr al-Baghdadi, released a new audio message appearing to defy the orders of al-Qa`ida chief Ayman al-Zawahiri not to merge with Jabhat al-Nusra, saying that “the Islamic State of Iraq and the Levant remains [in existence], as long as there is blood in our veins and our eyes are blinking…It remains, and we will not compromise; we will not give up…until we die.” Al-Baghdadi also said, “I chose the command of God over the command that runs against it in the [al-Zawahiri] letter.” – AFP, June 15; AP, June 15

June 15, 2013 (PAKISTAN): A female suicide bomber detonated explosives on a bus carrying students of the Sardar Bahadur Khan Women’s University in Quetta. After the explosion, a male suicide bomber was waiting inside the BMC Hospital ward for the arrival of high level officials, and he blew himself up when they arrived. In total, 25 people were killed, including 14 students of the women’s university, four nurses and Deputy Commissioner of Quetta Abdul Mansoor Kakar. The sectarian militant group Lashkar-i-Jhangvi claimed responsibility. – Dawn, June 16

June 17, 2013 (KENYA): Kenyan police shot to death two suspected militants after they refused to surrender during a raid on a house in Mombasa. Police accused the men of plotting attacks in Kenya on behalf of Somalia’s al-Shabab militant group. – Reuters, June 17

June 18, 2013 (IRAQ): Two suicide bombers shot to death the guards outside the Habib ibn Mathaher Shi`a mosque in Baghdad, and then detonated their explosives inside the building. The double suicide attack killed at least 31 people. – BBC, June 18

June 18, 2013 (PAKISTAN): A suicide bomber detonated explosives in a crowd of hundreds of mourners attending a funeral in the village of Sher Garh in Mardan District of Khyber Pakhtunkhwa Province, killing 29 people. Among the dead was a recently elected lawmaker who may have been the target. The lawmaker, Imran Khan Mohmand, campaigned as an independent, but later supported the party of cricketer-turned-politician Imran Khan. – AP, June 18

June 19, 2013 (IRAQ): A suicide bombing killed the leader of a provincial political party and four of his relatives in Ninawa Province. The leader, Yunus al-Ramah, was the head of the United Iraq Party. The incident occurred one day before elections in Ninawa and Anbar provinces, two Sunni-majority provinces where the April 20 polls were delayed due to security concerns. – AFP, June 19

June 19, 2013 (YEMEN): A suicide bomber on a motorbike detonated his explosives in the middle of a market in Yemen’s mainly Shi`a city of Sa`da, killing two civilians. – AFP, June 19

June 20, 2013 (UNITED STATES): The U.S. federal government charged Eric Harroun with conspiring to provide material support to a designated terrorist organization and with conspiring to use weapons of mass destruction overseas. Harroun, a former U.S. Army medic from Arizona, allegedly fought in Syria against the Bashar al-Assad regime in coordination with the al-Qa`ida-linked Jabhat al-Nusra militant group. He was arrested near Dulles International Airport in Virginia in March 2013. – Politico, June 21

June 20, 2013 (AFGHANISTAN): The Afghan Taliban announced that they are ready to free U.S. Army soldier Bowe Bergdahl in exchange for five of their senior operatives held at Guantanamo Bay. Bergdahl, the only known American captive from the war in Afghanistan, has been held by the Afghan Taliban since 2009. – AP, June 20

June 23, 2013 (PAKISTAN): Tehrik-i-Taliban Pakistan (TTP) militants killed nine foreign mountain climbers, including a U.S. citizen, at a camp at Nanga Parbat, the world’s ninth-tallest mountain. The TTP said that the attack was in retaliation for the U.S. drone strike that killed Waliur Rahman, the second-in-command of the TTP, on May 29, 2013. – Washington Post, June 23

June 24, 2013 (IRAQ): A suicide bomber killed an Iraqi counterterrorism official as he left a university in Tikrit. The official, Colonel Ghazi Ali al-Jubouri, was the head of counterterrorism for Salah al-Din Province. – Reuters, June 24

June 25, 2013 (AFGHANISTAN): Five Afghan Taliban gunmen and suicide bombers targeted the Ariana Hotel, which the Taliban claim is the location for a CIA base, and the presidential palace in Kabul. The bombers drove at least two land cruisers similar to those used by NATO soldiers, as well as fake badges and vehicle passes, which allowed at least one of the bombers to gain access to a heavily guarded area. The Afghan Interior Ministry said that three Afghan security guards and all five assailants were killed. – New York Times, June 24; AFP, June 25

June 26, 2013 (PAKISTAN): A bomb exploded on a busy street during rush hour in Karachi. The bomb targeted Judge Maqbool Baqir, who has worked on a number of terrorism cases. The judge and eight members of his security detail were killed in the blast. – AFP, June 26

June 27, 2013 (UNITED STATES): A federal grand jury in Boston indicted Dzhokhar Tsarnaev in the Boston Marathon bombings, charging him with detonating a weapon of mass destruction. Tsarnaev could face the death penalty or life in prison. – Los Angeles Times, June 27