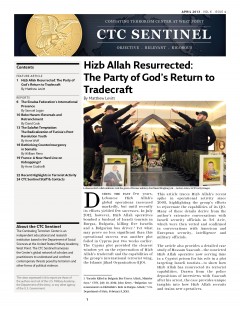 March 2, 2013 (MALI): The Chadian military claimed to have killed Mokhtar Belmokhtar, a former top operative in al-Qa`ida in the Islamic Maghreb (AQIM) who now leads a group of militants in the Sahel, in northern Mali. Belmokhtar claimed responsibility for the deadly hostage-taking incident at the In Amenas gas plant in Algeria in January. His death has not yet been confirmed. Another top AQIM operative, Abdelhamid Abu Zeid, was confirmed killed in northern Mali in late February 2013. – Reuters, March 2

March 2, 2013 (PAKISTAN): Tehrik-i-Taliban Pakistan threatened to bomb a mobile phone market in Peshawar, saying that the market is responsible for the “shameless” selling of video clips, ring tones and accessories. Taliban militants frequently claim that such businesses are “un-Islamic.” – Dawn, March 2

March 3, 2013 (IRAQ): A suicide bomber detonated explosives between major shrines in the Shi`a city of Karbala, causing a number of casualties. – al-Arabiya, March 3

March 3, 2013 (AFGHANISTAN): Militants ambushed a supply convoy of Afghan National Army soldiers in Warduj district in northern Badakhshan Province, killing one soldier and kidnapping 22 others. Despite negotiation attempts, 16 of the soldiers were later executed, while six were freed. According to the New York Times, “If the death toll was accurate, it was one of the single deadliest attacks on government soldiers by the insurgents in recent memory.” – New York Times, March 6

March 4, 2013 (UNITED STATES): A U.S. court found Hafiz Khan, 77-years-old, guilty of two counts of conspiracy and two counts of providing material support to terrorists. Khan, the imam of a small mosque in Miami, provided thousands of dollars of support to the Pakistani Taliban. Khan is a U.S. citizen who came to the United States in 1994. – New York Times, March 4

March 4, 2013 (YEMEN): A suicide bomber in a vehicle killed 12 members of a pro-government militia in Lawdar, Abyan Province. – BBC, March 4

March 5, 2013 (UNITED STATES): The Federal Bureau of Investigation arrested Reaz Qadir Khan, 48-years-old, on charges of aiding a suicide bomber who conducted an attack near the headquarters of Pakistan’s Inter-Services Intelligence (ISI) in Lahore in 2009. Khan, a naturalized U.S. citizen living in southeast Portland, allegedly provided money and advice to one of the suicide bombers involved in the Lahore attack. Khan was a wastewater employee with Portland’s environmental services bureau since 2007. He is originally from Pakistan. – Los Angeles Times, March 5

March 6, 2013 (SOMALIA): The UN Security Council voted to temporarily lift part of the 21-year-old arms embargo on Somalia, as part of an effort to allow the Somali government to purchase light weapons. – New York Times, March 6

March 9, 2013 (AFGHANISTAN): A suicide bomber attacked the gate to the Defense Ministry in Kabul, killing nine civilians. The incident occurred during a visit to Afghanistan by U.S. Secretary of Defense Chuck Hagel. – Reuters, March 9

March 11, 2013 (IRAQ): A suicide bomber killed three people at a police station in Dibis, northwest of Kirkuk. Many of the wounded were students at an adjacent Kurdish secondary school for girls. – AFP, March 11

March 11, 2013 (IRAQ/SYRIA): The Islamic State of Iraq, which is linked to al-Qa`ida, claimed responsibility for killing 48 Syrian soldiers and state employees who were in Iraq last week after fleeing across the border from a Syrian rebel advance. The convoy of Syrians was ambushed as it was escorted back home through Anbar Province. – Reuters, March 11

March 14, 2013 (IRAQ): Militants executed a large and complex assault on the Iraqi Justice Ministry in downtown Baghdad. The attack began with at least two explosions—one from a car bomb and the other believed to be from a suicide bomber—near the Justice Ministry. An estimated six gunmen wearing police uniforms and suicide vests then entered the ministry, where they engaged in gunfire with security forces. After approximately one hour, security forces stormed the building and some of the militants detonated their explosive vests. An estimated 24 people were killed in addition to the militants. The al-Qa`ida-linked Islamic State of Iraq later claimed responsibility. – AP, March 14; Deutsche Welle, March 17

March 16, 2013 (NORTH AFRICA): Al-Qa`ida in the Islamic Maghreb (AQIM) appealed for new recruits to fight against France’s “crusader” war in Mali. “The front of the Islamic Maghreb today is in dire need of the support of the sons of Tunisia, Morocco, Libya, and Mauritania, to thwart the attack of Crusader France and defeat its agents in the region, and empower the Islamic project,” the statement read. – Reuters, March 17

March 18, 2013 (SOMALIA): A suicide bomber in a car targeted a vehicle carrying Somali intelligence chief Khalif Ahmed Ilig and other officials in Mogadishu. Before the bomber could reach his target, however, a commuter minibus passed in front of the government vehicle just as the bomb exploded. Approximately 10 people died in the blast, although the intelligence chief survived with only minor injuries. – Los Angeles Times, March 18

March 18, 2013 (NIGERIA/CAMEROON): Nigeria’s Boko Haram militant group released a new hostage tape, with audio of the French family it recently kidnapped from Cameroon. On the tape, the militants also threatened to execute more attacks in Cameroon if that country did not stop detaining the group’s followers. – RFI, March 18

March 19, 2013 (IRAQ): A dozen car bombs and suicide blasts went off in Shi`a districts in Baghdad and south of the capital, killing more than 50 people. The incidents occurred on the 10th anniversary of the U.S.-led invasion of Iraq that removed Saddam Hussein from power. The Islamic State of Iraq claimed responsibility. – Dawn, March 19

March 19, 2013 (PAKISTAN): Hundreds of Tehrik-i-Taliban Pakistan (TTP) militants flooded into the last bastion of their rival group, Ansar-ul-Islam, in the Tirah Valley of Khyber Agency in the Federally Administered Tribal Areas. Ansar-ul-Islam’s remaining fighters, including its leader, fled their headquarters and took refuge near the border with Orakzai Agency. – Dawn, March 19

March 20, 2013 (UNITED STATES): U.S. prosecutors charged Ibrahim Suleiman Adnan Adam Harun (known as “Spin Ghul”) with plotting to kill U.S. diplomats in Nigeria and conspiracy to murder U.S. military personnel in Afghanistan. Harun was captured in 2005 and extradited to New York City last year. He was born in Saudi Arabia. According to Fox News and the Associated Press, “Authorities said they believe Harun killed American soldiers during his time on the battlefield [in Afghanistan], where he was known as the ‘White Rose.’ They also said the bomb conspiracy had targeted the U.S. Embassy in Abuja and a consulate in another Nigerian city, but they provided no further details about the failed plot.” – Fox News, March 20

March 20, 2013 (MALI): A suicide bomber detonated explosives at a checkpoint in Timbuktu, killing one Malian soldier. It marked the first suicide bombing in Timbuktu since the French-led offensive in January 2013. – Voice of America, March 21

March 21, 2013 (GLOBAL): The U.S. State Department offered $5 million rewards for information about two U.S. citizens who have fought with the militant group al-Shabab in Somalia. The two Americans have been identified as Omar Hammami (also known as Abu Mansur al-Amriki) and Jehad Mostafa, a former California resident. – Voice of America, March 21

March 23, 2013 (PAKISTAN): Tehrik-i-Taliban Pakistan (TTP) threatened to assassinate former Pakistani President Pervez Musharraf if he returns to the country as planned. The TTP said that they would send a death squad to kill Musharraf, who is supposed to arrive in Pakistan on March 24. – CNN, March 25

March 23, 2013 (SOMALIA): A female human rights worker was shot to death in Mogadishu. Two men with pistols killed the worker, who was identified only as “Zaynab.” – Garowe Online, March 23

March 25, 2013 (DENMARK): A Danish court found two Danish brothers guilty of planning a terrorist attack with Somalia’s al-Shabab militants. The two brothers, of Somali origin, were sentenced to three and a half years in prison. – AFP, March 25

March 25, 2013 (AFGHANISTAN): Insurgents detonated a minivan filled with explosives outside a patrol base in Helmand Province, and then opened fire with small-arms. One British soldier was killed. – Telegraph, March 26

March 27, 2013 (UNITED STATES): U.S. authorities arrested Eric Harroun, a former U.S. Army soldier, at Dulles International Airport outside Washington, D.C. On March 28, the United States charged Harroun with “conspiring to use a destructive device outside the United States.” Harroun, 30-years-old, is accused of entering Syria in January 2013 and fighting with the al-Nusra Front, a designated terrorist organization fighting to overthrow the regime of Syrian President Bashar al-Assad. The al-Nusra front is considered a Salafi-jihadi rebel group, with links to al-Qa`ida in Iraq. Harroun, a Phoenix native, served in the U.S. Army from 2000 until 2003. – New York Times, March 29

March 28, 2013 (THAILAND): The Thai government and representatives for the insurgents in southern Thailand met to discuss peace terms. Paradorn Pattanatabut, the chief of Thailand’s National Security Council, said that the Thai government will give the representatives one month to demonstrate that they can control the insurgents in the southern provinces. The representatives reportedly requested amnesty for insurgents, “including the lifting of arrest warrants against suspected insurgents, the release of prisoners convicted in southern violence cases, pending cases against suspected insurgents being dropped, and a rebel suspects blacklist being lifted,” according to one press report. The next round of talks is scheduled for April 29, 2013. –  UPI, March 29

March 29, 2013 (PAKISTAN): A suicide bomber tried to assassinate a senior Pakistani police commander near the U.S. Consulate in Peshawar. The commander, Abdul Majeed Marwat, was only slightly injured in the attack, but 12 people, including two women, were killed. – AFP, March 29

March 30, 2013 (MALI): A suicide bomber detonated his explosives after failing to force his way through the barricade at the western entrance to Timbuktu, wounding one Malian soldier. As part of the attack, other militants managed to enter the city, yet Malian soldiers—backed by French troops—killed two of them. – BBC, March 31; AFP, March 31

March 31, 2013 (NIGERIA): Nigerian troops reportedly killed 14 alleged members of Boko Haram in Kano. One soldier died in the raid. The military said that the militants were planning an Easter Sunday attack in the city. – BBC, March 31