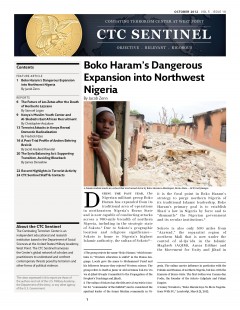 September 1, 2012 (MALI): The Movement for Unity and Jihad in West Africa (MUJAO) reportedly executed an Algerian diplomat who they took hostage after overrunning the Algerian Embassy in Gao, Mali, in April 2012. – al-Bawaba, September 2

September 2, 2012 (YEMEN): A suspected U.S. drone killed 10 alleged members of al-Qa`ida in the Arabian Peninsula, as well as three female companions, in the Rada area of Bayda Province. Later reports in CNN quoted Yemeni security officials as saying that all 13 people killed were civilians, and not members of AQAP, in what amounted to “a mistake.” – AFP, September 2; CNN, September 3

September 9, 2012 (MALI): A car accident killed a senior commander for al-Qa`ida in the Islamic Maghreb in Gao, located in northern Mali. He was identified as Nabil Makhloufi, an Algerian national. Makhloufi was known as the “amir of the Sahara.” – Reuters, September 9; BBC, September 10

September 10, 2012 (AFGHANISTAN): Militants fired into Bagram Air Base in Kabul, destroying a coalition Chinook CH-47 heavy-transport helicopter and killing three Afghan service members who were on board. An ISAF spokesman said, “We can confirm that an ISAF helicopter was destroyed by indirect fire. The helicopter caught fire after it was hit.” – New York Times, September 11

September 10, 2012 (INDONESIA): A would-be suicide bomber decided to turn himself in to authorities rather than carry through with his planned attack. He told police that he was supposed to attack any of the following four targets in Jakarta: the tactical police headquarters, a police station, the counterterrorism force Detachment 88, or a Buddhist community headquarters. – Australian Broadcasting Corporation, September 11

September 11, 2012 (GLOBAL): Al-Qa`ida chief Ayman al-Zawahiri confirmed that senior leader Abu Yahya al-Libi was killed earlier in the year. In June, the U.S. government announced that it had killed Abu Yahya in an airstrike in Pakistan, but al-Zawahiri’s statement was the first official al-Qa`ida confirmation of his death. –  Reuters, September 11; Voice of America, September 11

September 12, 2012 (PAKISTAN): Al-Qa`ida released a new video of American hostage Warren Weinstein, who was kidnapped from his home in Lahore in August 2011. Weinstein is 71-years-old, and is likely being held in the tribal regions along Pakistan’s border with Afghanistan. – ABC News, September 12

September 12, 2012 (SOMALIA): Two al-Shabab suicide bombers attempted to assassinate the new president of Somalia, Hassan Sheikh Mohamud, at a hotel in one of the most secure areas of Mogadishu. Mohamud was meeting with Kenya’s foreign minister at the time of the blasts, and both men escaped injury. Eight people were killed. – Reuters, September 12

September 14, 2012 (UNITED STATES): Authorities arrested Adel Daoud, an 18-year-old suburban Chicago man, who is accused of attempting to detonate what he thought was a car bomb outside a Chicago bar. “Mr. Daoud, a United States citizen who lives in Hillside, Ill., on the outskirts of Chicago, has been under surveillance for months, and in multiple conversations with [FBI] agents expressed a desire to kill on a mass scale as revenge for what he believed was the persecution of Muslims by the United States,” wrote the New York Times. Officials said that Daoud considered 29 possible targets, “including military recruiting centers, bars, malls and other tourist attractions in the Chicago area.” – New York Times, September 15

September 14, 2012 (UNITED STATES): A U.S. federal court in Virginia sentenced Amine Mohammed El Khalifi to 30 years in prison for plotting to execute a suicide bombing at the U.S. Capitol in Washington, D.C. As stated by the Washington Post, Khalifi, an illegal immigrant from Morocco, “was arrested in February [2012] heading to the Capitol with what he thought was an explosives-laden vest and a loaded gun. Undercover FBI agents had provided both weapons, which were rendered inoperable.” – Washington Post, September 14

September 14, 2012 (AFGHANISTAN): Taliban militants dressed in U.S. Army uniforms attacked Camp Bastion in southern Helmand Province, killing two U.S. Marines. Britain’s Prince Harry was at the camp at the time of the attack, but he was reportedly “never in any danger.” The large-scale attack destroyed or severely damaged eight fighter jets. According to the New York Times, “The complex attack, which NATO officials said was conducted by three tightly choreographed teams of militants wearing American Army uniforms, was a reminder that the Taliban remain capable of serious assaults…” The militants managed to enter the base perimeter and penetrate the facility. – Reuters, September 15; New York Times, September 16

September 16, 2012 (PAKISTAN): A roadside bomb killed 14 civilians in Lower Dir District of Khyber Pakhtunkhwa Province. The Pakistani Taliban released a statement and said that the attack was revenge after villagers in the area formed a pro-government militia. – Reuters, September 15

September 18, 2012 (AFGHANISTAN): A suicide bomber rammed an explosives-laden vehicle into a minibus carrying foreign aviation workers in Kabul, killing at least 12 people including eight South Africans. Hizb-i-Islami claimed responsibility, and claimed that the suicide bomber was a woman who was angry over an anti-Islam film that ridiculed the Prophet Muhammad. – AP, September 18

September 23, 2012 (INDONESIA): Indonesian police announced that they arrested nine men accused of planning suicide attacks against the security forces and other government targets in Jakarta. It was not immediately clear if the group had connections to established terrorist organizations. – al-Jazira, September 23

September 28, 2012 (NIGERIA): Nigeria’s military said that it arrested a number of security personnel due to their connections with Boko Haram. One of those arrested was an immigration officer. According to a Nigerian military official, the immigration officer “confessed to having been trained alongside 15 other members of the sect on weapon handling, assassination and special operations in Niger republic.” – AFP, September 28

September 30, 2012 (SYRIA): A suicide bomber in an explosives-laden vehicle targeted a government security compound in Qamishli, located in the country’s mainly Kurdish northeast near the Turkish border. Several people were killed. – Voice of America, September 30