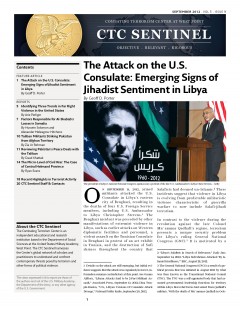 August 1, 2012 (IRAQ): The Iraqi Interior Ministry said that violence in Iraq hit a nearly two-year high during the month of July. A total of 325 people were killed in July, although 123 people were killed on a single day—July 23—when a series of coordinated attacks tore through the country. – CNN, August 1

August 1, 2012 (SOMALIA): A suicide bomber attempted to attack a national conference on a draft constitution, but was shot to death before he could detonate his explosives. A second suicide bomber blew himself up near the perimeter of the facility, injuring six police officers. Both bombers wore government uniforms. The new draft constitution was approved by Somalia’s constituent assembly. – Reuters, August 1; Voice of America, August 1

August 2, 2012 (SPAIN): Spanish authorities arrested three suspected al-Qa`ida militants who were allegedly plotting to attack in “Spain and/or other European countries.” The suspects—a Russian, a Russian of Chechen descent, and a Turk—were in possession of explosives. Spain’s interior minister said that the men had been in Spain for about two months, and were under surveillance for several weeks. He also said that the suspects were “clearly not acting as lone wolves.” Authorities suggested that the men may have been planning to attack a shopping mall in Gibraltar. – Christian Science Monitor, August 2; New York Times, August 2; CNN, August 6

August 3, 2012 (GERMANY): Prosecutors charged a 26-year-old German man with membership in an Islamist terrorist organization and helping to prepare attacks in Afghanistan. The suspect is accused of traveling to the Afghan-Pakistan border area in 2009 to be trained in weapons and explosives. He is also accused of participating in an attack on a joint U.S.-Afghan military base in Afghanistan in 2009. He was arrested in Turkey in July 2010 and extradited to Germany in early 2012. – AP, August 3

August 3, 2012 (KENYA): A suspected suicide bomber wounded nine people near a military airbase in Nairobi. The bomber, who detonated a grenade, was likely trying to target a group of soldiers in a Somali-dominated area of the capital. – Reuters, August 3

August 3, 2012 (NIGERIA): A suicide bomber tried to kill the emir of Fika, who is also the chairman of the Yobe State Council of Chiefs, at a mosque. A policeman noticed that the bomber was trying to get near the emir, and confronted him. The bomber then detonated his explosives, injuring four people. – Daily Times Nigeria, August 3; AFP, August 3

August 6, 2012 (AFGHANISTAN): Eleven Afghan policemen reportedly defected to the Taliban in Musa Qala district of Helmand Province. According to the BBC, “It is the second such defection in recent weeks—a police commander and 13 junior officers joined the Taliban in western Farah Province in late July.” – BBC, August 6

August 7, 2012 (AFGHANISTAN): A suicide bomber in a truck rammed into the gate of a NATO base in Logar Province. No deaths were reported. The Taliban claimed responsibility. – AP, August 7

August 7, 2012 (AFGHANISTAN): A remote-detonated bomb exploded along a road outside Kabul, killing at least eight people in a minibus. According to the New York Times, “The target may have been another vehicle carrying workers to their jobs at the Defense Ministry, some of them in military uniforms. The ministry vehicle was traveling behind the minibus carrying civilians…and the bomber may have gotten the timing wrong when setting off the explosives.” – New York Times, August 7

August 9, 2012 (AFGHANISTAN): Two Afghan soldiers tried to kill a group of NATO troops outside a military base in eastern Afghanistan. There were no NATO casualties, and one of the assailants was shot to death by return fire. – AP, August 10

August 9, 2012 (YEMEN): A senior Yemeni military officer was killed after a bomb planted in his car exploded in Mukalla, Hadramawt Province. Authorities blamed the incident on al-Qa`ida in the Arabian Peninsula. – Reuters, August 10

August 10, 2012 (SYRIA): The Associated Press quoted U.S. intelligence officials as saying that al-Qa`ida is expanding in Syria, and is now building a network of well-organized cells. – AP, August 10

August 15, 2012 (ALGERIA): Authorities arrested three armed Islamists in Berriane, located in southern Algeria. One of the men was identified as Abderrahmane Abou Ishak Essoufi, a senior member of al-Qa`ida in the Islamic Maghreb. The men were apprehended while traveling toward the Sahel border. – AFP, August 20

August 16, 2012 (AFGHANISTAN): A NATO helicopter crashed in Kandahar Province, killing 11 people, including seven NATO troops. The Taliban said they shot down the aircraft, although NATO would not confirm that claim. – AP, August 16

August 16, 2012 (PAKISTAN): At least nine Taliban fighters attacked Pakistani Air Force Base Minhas in Kamra, killing one security official. According to Fox News, “the militants scaled a wall surrounding the air base following the intense rocket barrage and a two hour-plus gunfight ensued. … Security forces were able to retake the base, but one soldier and the nine militants were killed.” Some experts believe that the base in Kamra may be linked to Pakistan’s nuclear weapons arsenal. – Fox News, August 16

August 18, 2012 (PAKISTAN): A suicide bomber in a vehicle killed five people, including members of the Frontier Corps, at a checkpoint in a Quetta suburb. – AP, August 18; AFP, August 18

August 19, 2012 (IRAQ): A car bomb exploded next to the convoy of a prominent Iraqi Sunni cleric, critically wounding him and killing four of his bodyguards. The cleric, Mehdi al-Sumaidai, recently urged Islamist militant groups in the country to end their insurgency. The incident occurred in Baghdad. – Reuters, August 19

August 19, 2012 (RUSSIA): A suicide bomber detonated his explosives as policemen in southern Russia gathered at the funeral of a colleague. The blast, which occurred in Ingushetia, killed at least seven policemen. – AP, August 19

August 21, 2012 (AFGHANISTAN): An insurgent rocket attack damaged the plane of U.S. General Martin E. Dempsey as it sat parked on a runway in Bagram. “Indirect fire at Bagram is not unusual, so we don’t believe his aircraft was targeted,” said a Pentagon spokesperson. – AP, August 21

August 21, 2012 (IRAQ): An Iraqi man living in Kentucky pleaded guilty in federal court to plotting to assist al-Qa`ida in Iraq. The man, Mohanad Shareef Hammadi, was arrested in May 2011 and admitted to targeting U.S. forces in Iraq. His accomplice, Waad Ramadan Alwan, pleaded guilty to a number of terrorism charges in December 2011. – CNN, August 21

August 21, 2012 (PAKISTAN): A U.S. drone reportedly killed Badruddin Haqqani in North Waziristan Agency of the Federally Administered Tribal Areas. The Taliban refused to officially confirm Badruddin’s death, although Afghan and Pakistani officials, as well as a senior Taliban leader, said that Badruddin died in the strike. Badruddin is considered the operations commander in the Haqqani network, and is the son of the network’s founder, Jalaluddin Haqqani. – Wall Street Journal, August 26

August 24, 2012 (AFGHANISTAN): A NATO airstrike killed senior Pakistani Taliban commander Mullah Dadullah, along with 12 other militants, at a compound in Kunar Province. Dadullah was the leader of the Pakistani Taliban faction in Bajaur Agency of the Federally Administered Tribal Areas. According to the New York Times, “Mullah Dadullah, also the name of an Afghan commander of the Taliban who was killed in 2007, was the nom de guerre of Jamal Said, a prayer leader from the village of Damadola, in Bajaur. He rose through the ranks of the Pakistani Taliban and in 2008, headed its vice and virtue department, enforcing strict edicts based on a narrow interpretation of Islamic texts.” Dadullah became the leader of the Pakistani Taliban faction in Bajaur after the Taliban leadership fired his predecessor, Faqir Muhammad, for participating in peace talks with Islamabad. – New York Times, August 25

August 26, 2012 (PAKISTAN): Dozens of insurgents from Afghanistan crossed into Pakistan and attacked an anti-Taliban militia post in Bajaur Agency of the Federally Administered Tribal Areas. One soldier and 20 militants were killed. – AP, August 26

August 27, 2012 (AFGHANISTAN): A suicide bomber in a vehicle exploded in Kandahar, killing four civilians. The bomb appeared to target Abdul Raziq, Kandahar’s police chief, but he was not injured. Raziq is leading a strong campaign against insurgents in Kandahar, the Taliban’s former stronghold. – Voice of America, August 27; New York Times, August 28

August 27, 2012 (SOMALIA): African Union and Somali troops captured the port of Marka from al-Shabab. Somalia’s al-Shabab militant group has suffered a string of losses recently, and it now only controls two other ports: Barawe and Kismayo. – AFP, August 27

August 27, 2012 (KENYA): Unidentified militants shot to death a Muslim cleric in Mombasa. The cleric had been previously accused by the United States of helping Islamist militants in Somalia. The killing sparked large protests, with angry rioters smashing vehicles and setting churches on fire. –Reuters, August 27

August 28, 2012 (RUSSIA): A female suicide bomber killed Said Atsayev, a leader of Sufi Muslims in the region, in Dagestan. The blast also killed six of Atsayev’s followers. The bomber was later identified as Aminat Saprykina, an ethnic Russian woman who lost two husbands—both militants—in the North Caucasus conflict. At the time of her death, she was married to another wanted militant. – AP, August 28; Reuters, August 28; RFE/RL, August 29

August 28, 2012 (RUSSIA): A border guard shot and killed seven servicemen at a frontier post in Dagestan. The guard was killed by return fire. – Reuters, August 28

August 31, 2012 (THAILAND): Suspected Malay-Muslim separatists executed a wave of bombings in southern Thailand, wounding two soldiers. The “bomb-like” devices were planted in at least 60 locations in Narathiwat and Pattani provinces, although most of the devices were fake. – Reuters, August 31