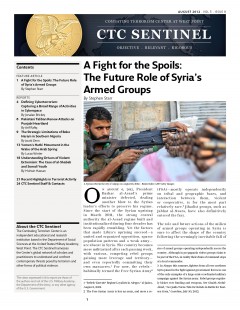 July 1, 2012 (AFGHANISTAN): An Afghan policeman shot and killed three British soldiers in Helmand Province. The Taliban claimed responsibility. According to the Los Angeles Times, “Afghan officials identified the shooter as a member of the Afghan National Civil Order Police, a special unit set up under U.S. auspices to help keep insurgents at bay and enforce the law in towns and villages. Its members undergo a more selective recruitment process and more rigorous training than regular Afghan police, adding to the disquiet surrounding the attack.” – Los Angeles Times, July 2

July 1, 2012 (KENYA): Masked assailants launched a coordinated gun and grenade attack on two churches in Garissa, a northern Kenyan town. At least 17 people were killed. It was the most deadly attack in Kenya since it deployed troops into neighboring Somalia to fight al-Shabab eight months ago. There was no claim of responsibility. – Reuters, July 2

July 2, 2012 (AFGHANISTAN): A suicide bomber in an explosives-laden vehicle killed seven people near the gates of a university in Kandahar city. The bomber reportedly targeted a vehicle carrying workers from a nearby U.S. military base. – Reuters, July 2; RTTNews, July 2

July 2, 2012 (SOMALIA): A joint operation by Kenyan and Somali military forces inside Somalia resulted in the rescue of four international aid workers, who had been kidnapped three days earlier in Kenya. – Voice of America, July 2

July 3, 2012 (PAKISTAN): Islamabad agreed to reopen NATO’s supply routes in Pakistan, which have been closed since NATO troops mistakenly killed 24 Pakistani soldiers in November 2011. According to CNN, “The Pakistani routes offer a shorter and more direct route than the one NATO has been using since November that went through Russia and other nations, avoiding Pakistan altogether. It has cost the U.S. $100 million more a month to use the alternative northern routes.” – CNN, July 24

July 5, 2012 (SYRIA): Iraqi Foreign Minister Hoshyar Zebari said that the Iraqi government has “solid information and intelligence that members of al-Qa`ida terrorist networks have gone in the other direction, to Syria, to help, to liaise, to carry out terrorist attacks.” Zebari said that al-Qa`ida “operational officers” were moving into Syria through old smuggling routes. – Reuters, July 5

July 5, 2012 (NIGERIA): A Nigerian court charged two men—Olaniyi Lawal and Lukman Babatunde—with having links to al-Qa`ida in the Arabian Peninsula (AQAP). The two Nigerians are accused of receiving more than $6,000 from AQAP to recruit new members and send them to Yemen. – Voice of America, July 5; Reuters, July 6

July 6, 2012 (IRAQ): A suicide bomber detonated an explosives-laden vehicle near the home of an anti-al-Qa`ida militiaman in Ramadi, killing six people. – AFP, July 6

July 6, 2012 (PAKISTAN): A U.S. drone killed at least 15 suspected Taliban militants in Zoi Narai village in North Waziristan Agency of the Federally Administered Tribal Areas. According to the New York Times, “A drone fired four missiles at a compound owned by a Taliban commander named Rahimullah, said a local resident who was reached by telephone. The commander, who apparently was not present at the time of the strike, is thought to be a close aide of a local warlord, Hafiz Gul Bahadur, who controls a vast part of North Waziristan…” – New York Times, July 6

July 6, 2012 (PAKISTAN): Gunmen on motorcycles killed 18 people at a roadside restaurant in Baluchistan Province. A government official told the New York Times that Pakistanis attempting to travel to Europe with smugglers were the targets of the attack. – New York Times, July 6

July 7, 2012 (MAURITANIA): Abu Hafs al-Mauritani, who previously served as an adviser to Usama bin Ladin, was released from a prison in Mauritania. Reports suggested that his freedom came after he renounced his ties to al-Qa`ida and condemned the 9/11 attacks. As stated by the Associated Press, “He spent years in custody in Iran before being extradited to Mauritania in April.” – AP, July 9

July 8, 2012 (UNITED KINGDOM): British authorities arrested an al-Qa`ida suspect after he traveled near the venue for the upcoming London Olympics five times in one day. The suspect, who is originally from Somalia, has only been identified as “CF.” – al-Arabiya, July 8

July 10, 2012 (AFGHANISTAN): According to NATO, “An Afghan and coalition security force conducted an operation to detain the leader of a Taliban attack cell in Chimtal district, Balkh Province, today. During the operation a group of insurgents attacked the combined force.  The force returned fire killing all of the attackers.  As the force continued their mission, another armed individual approached and threatened them with his weapon.  He was consequently engaged and killed by the security force. The operation resulted in the detention of one suspected insurgent and the seizure of multiple weapons.” – ISAF, July 10

July 11, 2012 (YEMEN): A suicide bomber suspected of belonging to al-Qa`ida in the Arabian Peninsula killed at least 10 Yemeni police cadets as they were leaving an academy in Sana`a. Some reports placed the death toll at 22. – AP, July 11; Telegraph, July 11

July 14, 2012 (AFGHANISTAN): Afghan and coalition forces killed two Taliban militants in Wardak Province. According to ISAF, “both Qari Ziauddin, a senior Taliban leader, and Tor Gul, a weapons smuggler, were killed along with several other insurgents during the operation…Qari Ziauddin, also known as Ikram Jan, was the senior Taliban leader for Maidan Shahr district. He armed insurgent fighters, transported suicide bombers, coordinated the emplacement of improvised explosive devices, and personally led numerous attacks throughout the district.” – ISAF, July 16

July 16, 2012 (NIGER): The European Union approved a new mission to send experts to Niger to train its security forces to fight al-Qa`ida. “Increased terrorist activity and the consequences of the conflict in Libya have dramatically heightened insecurity in the Sahel,” explained EU foreign policy chief Catherine Ashton. According to Reuters, “About 50 international staff and 30 staff hired locally will be based in the mission’s headquarters in Niamey, with liaison officers in Bamako, the capital of neighboring Mali, and Nouakchott, capital of Mauritania.” – Reuters, July 16

July 19, 2012 (YEMEN): Yemeni Colonel Abdullah al-Maouzaei was killed by a car bomb outside his home in Aden. Al-Maouzaei, who survived three previous assassination attempts, was tasked with finding members of al-Qa`ida in the Arabian Peninsula. – AP, July 19

July 22, 2012 (AFGHANISTAN): Afghan authorities said that six Afghans returning home from work at a NATO base in Wardak Province were captured by Taliban militants. The Taliban then executed five of the men and booby-trapped their bodies with explosives. The sixth man managed to escape. – AFP, July 22

July 22, 2012 (AFGHANISTAN): An Afghan police commander and 12 junior officers defected to the Taliban in Farah Province. The commander, identified as Mirwais, was in charge of a 20-man checkpoint. Seven other officers who refused to defect were poisoned. According to reports, the men took with them heavy weapons, radios and at least one U.S.-made armored Humvee. – BBC, July 24; Reuters, July 24

July 22, 2012 (IRAQ): Abu Bakr al-Baghdadi, the leader of the Islamic State of Iraq (ISI), purportedly released a new audio message saying that the militant group was “starting a new stage.” He said, “The first priority in this is releasing Muslim prisoners everywhere, and chasing and eliminating judges and investigators and their guards.” Al-Baghdadi became head of the ISI in 2010. – AFP, July 21

July 23, 2012 (IRAQ): A series of coordinated bombings and shootings occurred in more than a dozen Iraqi cities, killing more than 100 people. The Islamic State of Iraq (ISI) later claimed responsibility. The violence marked the deadliest day in Iraq in more than two years. The attacks occurred one day after the ISI warned of a “new stage” of operations. As described by the Associated Press, “Many of Monday’s attacks were stunning in their scope and boldness. They bore the hallmarks of al-Qaida, happening within a few hours of each other and striking mainly at security forces, government officials and Shiite neighborhoods. In one brazen assault, three carloads of gunmen pulled up at an Iraqi army base near the northeastern town of Udaim and opened fire, killing 13 soldiers before escaping…” – AP, July 23; Voice of America, July 25

July 24, 2012 (PAKISTAN): Gunmen fired on a convoy of NATO supply trucks in Khyber Agency of the Federally Administered Tribal Areas, killing two people. It was the first attack on NATO supply trucks since the Pakistan supply routes were reopened earlier in July. – CNN, July 24

July 26, 2012 (NORTH AFRICA): U.S. General Carter Ham, the head of Africa Command (AFRICOM), said that al-Qa`ida in the Islamic Maghreb (AQIM) is likely “al Qaeda’s best funded, wealthiest affiliate.” According to Ham, “AQIM gained strength, they gained a lot of money through kidnapping for ransoms and they became a stronger and stronger organization.” – Reuters, July 26

July 28, 2012 (AFGHANISTAN): Militants killed two NATO service members in eastern Afghanistan. The exact location of the attack, or the nationalities of the dead, was not immediately disclosed. – Los Angeles Times, July 28

July 28, 2012 (AFGHANISTAN): NATO forces killed the Haqqani network militant Abdullah, also known as Tufan, in Paktia Province. According to ISAF, Tufan “was directly involved in the planning and execution of the June 20 suicide attack in the Khost capital that killed more than a dozen Afghan civilians.” – ISAF, July 31

July 30, 2012 (SYRIA): A new report in the Guardian newspaper said that “scores of foreign jihadists have crossed into Syria from Turkey in the past two weeks.” The report quoted a smuggler who said, “There have been Tunisians, men from Uzbekistan too and from Pakistan.” – Guardian, July 30

July 30, 2012 (UNITED STATES): Shaker Masri, a 28-year-old U.S.-born citizen of Syrian descent, pleaded guilty to planning to travel to Somalia to fight with al-Shabab. Masri was arrested in August 2010 while preparing to leave for Somalia. The Chicago man faces nearly 10 years in prison. – Chicago Tribune, July 30