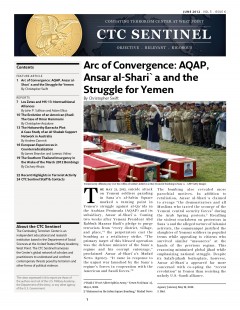 May 1, 2012 (UNITED STATES): A U.S. federal jury found Adis Medunjanin, a Bosnian-born U.S. citizen, guilty of plotting a coordinated suicide bombing attack on New York City subways in 2009 at the behest of al-Qa`ida leaders. Medunjanin’s co-conspirators, Najibullah Zazi and Zarein Ahmedzay, pleaded guilty to the charges in 2010 and testified against Medunjanin. Sentencing was scheduled for September 7. – Reuters, May 1; USA Today, May 1

May 1, 2012 (SOMALIA): A suicide bomber killed three Somali lawmakers at a hotel in Dusamareb. Al-Shabab claimed responsibility. – Reuters, May 1

May 1, 2012 (NIGERIA): The Boko Haram group released a video celebrating its recent bombing of a Nigerian newspaper office, and it warned that it would target local and foreign media in the future if they published reports that were biased against Boko Haram or Islam. – Reuters, May 2

May 2, 2012 (GLOBAL): Two new issues of Inspire magazine, which is published by al-Qa`ida in the Arabian Peninsula, surfaced on Islamist web forums. They were the first new issues of the magazine to appear since the deaths of Anwar al-`Awlaqi and Samir Khan in September 2011. One of the articles read, “To the disappointment of our enemies, issue 9 of Inspire magazine is out against all odds…The Zionists and the Crusaders thought that the magazine was gone with the martyrdom of Shaykh Anwar and brother Samir. Yet again, they have failed to come to terms with the fact that the Muslim ummah is the most fertile and most generous mother that gives birth to thousands and thousands of the likes of Shaykh Anwar and brother Samir.” Another article quoted Anwar al-`Awlaqi saying, “The use of poisons or chemical and biological weapons against population centers is allowed and is strongly recommended due to its great effect on the enemy.” – ABC News, May 2; ABC News, May 3

May 2, 2012 (AFGHANISTAN): The Taliban announced that it will officially start its annual spring offensive on May 3. The Taliban is calling the offensive al-Farouk. – USA Today, May 2

May 3, 2012 (GLOBAL): The Combating Terrorism Center at the U.S. Military Academy, West Point, released 17 declassified documents found in Usama bin Ladin’s Abbottabad, Pakistan, compound. The documents provided insight into al-Qa`ida as well as Bin Ladin’s views on the evolution of the terrorist group he founded. – CNN, May 4

May 3, 2012 (RUSSIA): A double bombing at a police station killed at least 13 people in Makhachkala, Dagestan, located in Russia’s troubled North Caucasus region. A suicide bomber was responsible for at least one of the explosions. – New York Times, May 4

May 4, 2012 (PAKISTAN): A suicide bomber killed at least 20 people in an attack targeting a police checkpoint near a crowded market in Bajaur Agency in the Federally Administered Tribal Areas. Tehrik-i-Taliban Pakistan claimed responsibility. – Reuters, May 4

May 4, 2012 (NIGERIA): Suspected Boko Haram gunmen stormed a prison in Borno State, killing two guards and freeing an unknown number of prisoners. – Voice of America, May 4

May 6, 2012 (GLOBAL): Al-Qa`ida released a video of American hostage Warren Weinstein, who was kidnapped in Lahore, Pakistan, in August 2011. In the video, Weinstein said he will be killed unless President Barack Obama agreed to al-Qa`ida’s demands. – CNN, May 7

May 7, 2012 (UNITED STATES): The Central Intelligence Agency foiled a plot by al-Qa`ida in the Arabian Peninsula (AQAP) to destroy a U.S.-bound airliner with a sophisticated bomb containing no metal. The new bomb was designed to fit in a passenger’s underwear, similar to AQAP’s Christmas Day 2009 failed plot. Various reports, quoting U.S. and Yemeni officials, said that the suicide bomber AQAP recruited to carry out the attack was actually an undercover operative working for U.S. and Saudi intelligence. – AP, May 8; USA Today, May 9

May 7, 2012 (AFGHANISTAN): According to CNN, up to 20 high level Taliban prisoners have been released from NATO custody in Afghanistan during the past two years in the pursuit of peace negotiations. “In all cases, they [those released] were assessed as unlikely to rejoin the insurgency,” said the CNN report. – CNN, May 7

May 10, 2012 (AFGHANISTAN): Six Taliban gunmen killed three police officers in Paktika Province. The gunmen wore explosive vests under Afghan Local Police uniforms and tried to pass through a security checkpoint near the district governor’s building. A gunfight ensued, and two of the assailants detonated their explosive vests. All of the militants were eventually killed. – New York Times, May 10

May 10, 2012 (SYRIA): Two suicide car bombers killed at least 55 people in Qazaz district in Damascus. Witnesses said that the bombers appeared to target a Syrian military intelligence building. The al-Nusra Front claimed responsibility. – Voice of America, May 10; The Telegraph, May 12

May 10, 2012 (YEMEN): Two airstrikes in southern Yemen killed seven al-Qa`ida in the Arabian Peninsula militants. Two of the dead were described as top operatives. – USA Today, May 10

May 10, 2012 (CHINA): A suicide bomber blew himself up to protest the demolition of his house in southwest China’s Yunnan Province. Three people were killed. – AFP, May 11; BBC, May 11

May 11, 2012 (AFGHANISTAN): A man wearing an Afghan Army uniform shot to death a U.S. soldier in Kunar Province.  The provincial police chief said that the gunman was an Afghan Army soldier. The Taliban claimed responsibility. – CBS, May 11; New York Daily News, May 11

May 11, 2012 (SYRIA): Syrian state television reported that the army foiled an attempted suicide car bombing in Aleppo. The alleged militant was shot to death, and authorities reportedly found 2,640 pounds of explosives in his vehicle. – AFP, May 11

May 12, 2012 (NIGERIA): Suspected Boko Haram gunmen burned down a police station in Borno State. Two policemen were killed. – AFP, May 14

May 13, 2012 (AFGHANISTAN): A gunman in a car assassinated Arsala Rahmani, a top member of the Afghan peace council and a senator in parliament, in Kabul. As described by the Associated Press, “Police said an assassin with a silencer-equipped pistol shot Rahmani, who was in his 70s, as he was riding in his car in one of the capital’s most secure areas, near Kabul University.” The Taliban publicly denied responsibility. – AP, May 13

May 13, 2012 (IRAQ): A suicide bomber targeted a police checkpoint in Baghdad, killing at least three people. – Reuters, May 13

May 14, 2012 (AFGHANISTAN): A suspected suicide bomber killed at least seven Afghan civilians in a pharmacy in Faryab Province. Among the dead was a member of a provincial council from neighboring Badghis Province. – Washington Post, May 14

May 15, 2012 (IRAQ): A suicide bomber in a vehicle targeted an Iraqi Army base in Mosul, Ninawa Province, killing seven Iraqi soldiers. – CNN, May 15

May 16, 2012 (SOMALIA): Abu Mansur al-Amriki, who is U.S. citizen Omar Hammami, released an autobiography detailing his experiences in Somalia. Hammami left his home in Alabama to join the al-Shabab militant group in Somalia around 2007. – AFP, May 17

May 17, 2012 (GLOBAL): Al-Qa`ida leader Ayman al-Zawahiri released a new video message, urging people in Saudi Arabia to revolt, following the example of citizens in Egypt, Libya and Tunisia. “The family of Saud might be able to kill tens, hundreds, or thousands from amongst you, but if hundreds of thousands come out, then they will be shocked and will end up, Allah permitting, in the state that their brethren ended up in amongst the ousted tyrants,” al-Zawahiri said. – CNN, May 18

May 17, 2012 (AFGHANISTAN): Four gunmen armed with explosives attacked the governor’s compound in Farah Province, killing six Afghan policemen and one civilian. All four assailants were killed. The governor was at the compound, but was not injured. – Fox News, May 17

May 17, 2012 (YEMEN): Yemeni government forces managed to recapture some territory from al-Qa`ida in the Arabian Peninsula in Abyan Province. According to Voice of America, “Yemeni military officials say government troops are moving slowly along the outskirts of the al-Qaida stronghold in Zinjibar, trying to avoid being out-flanked. Zinjibar was captured by the militants in May of last year [2011].” – Voice of America, May 17

May 18, 2012 (PAKISTAN): A suicide bomber killed at least 20 people in an attack on a police checkpoint in Bajaur Agency of the Federally Administered Tribal Areas. – The Windsor Star, May 19

May 19, 2012 (AFGHANISTAN): A suicide bomber attacked a police checkpoint in Khost Province, killing six civilians and two policemen. – Bloomberg, May 19

May 21, 2012 (YEMEN): A suicide bomber targeted a military parade rehearsal in Sana`a, killing at least 100 soldiers. The bomber was described as a soldier taking part in the drill. Ansar al-Shari`a, which is tied to al-Qa`ida in the Arabian Peninsula, claimed responsibility, and it said that the attack was aimed at Yemen’s defense minister and was revenge for the government’s campaign against the militants. – AP, May 21; Guardian, May 21; New York Times, May 22

May 23, 2012 (UNITED STATES): U.S. Secretary of State Hillary Clinton said that cyber experts based at the State Department had engaged in a form of cyber war with al-Qa`ida-affiliated extremists. Clinton said that after al-Qa`ida sympathizers bragged about killing Americans, “within 48 hours, our team plastered the same sites with altered versions of the ads that showed the toll al Qaeda attacks have taken on the Yemeni people.” – AP, May 23

May 23, 2012 (PAKISTAN): A U.S. drone killed at least four suspected militants in North Waziristan Agency of the Federally Administered Tribal Areas. – BBC, May 23

May 24, 2012 (UNITED STATES): Barry Walter Bujol, Jr., who was convicted in the United States of trying to give al-Qa`ida restricted military documents, GPS equipment and money, was sentenced to 20 years in prison, the maximum punishment. – AP, May 24

May 24, 2012 (PAKISTAN): A U.S. drone killed eight militants in North Waziristan Agency of the Federally Administered Tribal Areas. – AFP, May 23

May 25, 2012 (YEMEN): A suicide bomber in a vehicle killed at least 12 people in Hazm, a northern town controlled by Zaydi Huthi rebels. The bomber targeted a school. Al-Qa`ida in the Arabian Peninsula claimed responsibility. – BBC, May 25; AFP, June 1

May 25, 2012 (SOMALIA): The African Union Mission in Somalia said that al-Shabab militants have been pushed out of Afgoye, a town on the outskirts of Mogadishu. – Voice of America, May 25

May 25, 2012 (TURKEY): Two men in a vehicle attacked a police station in Kayseri, located in central Turkey, killing a policeman. Both men drove up to the building while firing weapons, and then one of the militants detonated a suicide bomb. Both assailants were killed. – AFP, May 25

May 27, 2012 (MALI): Al-Qa`ida in the Islamic Maghreb seized a key arms depot in Gao, located in northern Mali. The underground weapons and ammunition facility is considered one of the Malian army’s “main depots” in the country. – AFP, May 27

May 28, 2012 (PAKISTAN): A U.S. drone killed at least five militants in North Waziristan Agency of the Federally Administered Tribal Areas. – Dawn, May 28

May 29, 2012 (SOMALIA): Al-Shabab militants ambushed the convoy of Somali President Shaykh Sharif Shaykh Ahmad on the road between Afgoye and Mogadishu. The president was able to return to Mogadishu safely. – BBC, May 29

May 31, 2012 (AFGHANISTAN): A suicide bomber in a vehicle attacked a checkpoint in Kandahar Province, killing at least five policemen. – AFP, May 30

May 31, 2012 (IRAQ): A delivery truck packed with explosives killed at least 13 people in the mainly Shi`a Shula district of Baghdad. – Reuters, May 31