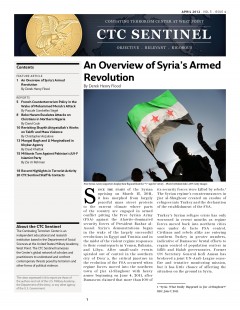 March 2, 2012 (UNITED STATES): A U.S. court sentenced Betim Kaziu, a New York City man, to 27 years in prison for traveling to the Middle East in a failed attempt to join al-Qa`ida. The 24-year-old man wanted to kill U.S. troops to avenge the abuse of Muslims. – AP, March 2

March 2, 2012 (PAKISTAN): A suicide bomber targeted the Lashkar-i-Islam militant group in Khyber Agency in the Federally Administered Tribal Areas, killing at least 20 people. Lashkar-i-Islam is led by Mangal Bagh, and the group has been weakened recently in its Khyber Agency stronghold. – BBC, March 2

March 3, 2012 (AFGHANISTAN): Afghan General Abdul Hameed said that the Taliban have a sophisticated method to infiltrate Afghanistan’s security forces. “Placing the rogues inside the army is well-planned by the enemies,” he said. “The Taliban give them special training. We must enhance intelligence gathering on the movements of recruits, tap their cellphones and we must find out who they are in contact with outside the army.” According to Reuters, “About 70 members of the NATO-led force were killed in 42 insider attacks from May 2007 through the end of January this year [2012].” – Reuters, March 3

March 3, 2012 (PAKISTAN): A suicide bomber on foot targeted the convoy of Aftab Khan Sherpao, a senior politician and the former interior minister of Pakistan, in Khyber-Pakhtunkhwa Province. The official escaped unharmed. – Voice of America, March 3

March 3, 2012 (ALGERIA): A suicide bomber rammed an explosives-laden vehicle into the paramilitary gendarmerie headquarters in Tamanrasset, injuring at least 23 people. The Movement for Oneness and Jihad in West Africa, considered a splinter group of al-Qa`ida in the Islamic Maghreb, claimed responsibility. It was reportedly the first time militants launched an attack in the area. According to Agence France-Presse, “The Movement for Oneness and Jihad in West Africa (Jamat Tawhid Wal Jihad Fi Garbi Afriqqiya) surfaced in December [2011], when it claimed to be holding three Westerners kidnapped from a Western Sahara refugee camp in Algeria in October. Security sources said it had broken off from the main group, Al-Qaeda in the Islamic Maghreb (AQIM), in order to spread jihad to west Africa and not confine themselves just to the Maghreb or Sahel regions.” – AP, March 2; AFP, March 3

March 3, 2012 (SYRIA): A bomb killed seven people near a military checkpoint in Dera`a’s Rawda district. Syrian authorities allege that the explosion was from a suicide bomber in a vehicle. – Reuters, March 3

March 3, 2012 (YEMEN): Two suicide bombers attacked a Republican Guard camp in Bayda in central Yemen, killing one soldier. According to reports, “the bombers deceived the guards by bringing in an ox that they said was a present for the camp commander. Once inside [the camp], they detonated their explosives.” – AP, March 3

March 3, 2012 (PHILIPPINES): A bomb ripped through a commercial district on Jolo Island in the southern Philippines, killing two people. Authorities believe that the Abu Sayyaf Group was responsible. – AFP, March 4

March 4, 2012 (PAKISTAN): According to press reports, Hakimullah Mehsud, the leader of Tehrik-i-Taliban Pakistan (TTP), demoted Faqir Muhammad, who was previously the deputy head of the group. No reason was given, but in the past Faqir Muhammad and other TTP leaders have disagreed over strategy. Faqir Muhammad operates out of Bajaur Agency in the Federally Administered Tribal Areas. – BBC, March 5

March 4, 2012 (YEMEN): Al-Qa`ida in the Arabian Peninsula (AQAP) fighters overran a military post near Zinjibar in Abyan Province. After entering the facility, the AQAP fighters reportedly seized armored vehicles, artillery pieces, assault rifles and rockets, and then used those weapons against Yemeni troops, killing at least 180 soldiers. One Yemeni military official described it as a “massacre.” Another 55 soldiers were captured and paraded through a neighboring town. Approximately 32 AQAP fighters died in the assault. – AP, March 5; Voice of America, March 4; Telegraph, March 5; AP, March 6

March 4, 2012 (YEMEN): Muhammad al-Hanq, a regional commander for al-Qa`ida in the Arabian Peninsula (AQAP), died from illness, according to an AQAP statement. – AFP, March 8

March 7, 2012 (AFGHANISTAN): An Afghan policeman allowed Taliban fighters to enter and kill nine other policemen while they slept at a checkpoint in Uruzgan Province. – New York Times, March 8

March 7, 2012 (IRAQ): A car bomb exploded outside a restaurant in a Shi`a area of Tal Afar, Ninawa Province. As people gathered to help the wounded, a suicide bomber detonated explosives among them. At least 14 people were killed. – CNN, March 7

March 8, 2012 (NIGERIA): British citizen Chris McManus and Italian citizen Franco Lamolinara, who were being held hostage, were killed in a failed UK and Nigerian military rescue attempt. According to UK Prime Minister David Cameron, “A window of opportunity arose to secure their release. We also had reason to believe that their lives were under imminent and growing danger. The early indications are clear that both men were murdered by their captors, before they could be rescued.” Nigerian authorities allege that the Boko Haram group was holding the two hostage, but the group denied involvement. – Bloomberg, March 9; Voice of America, March 9

March 9, 2012 (PAKISTAN): Tehrik-i-Taliban Pakistan (TTP) warned that they will attack government, police and military officials if three of Usama bin Ladin’s wives are not released from Pakistani custody. “If the family of Osama bin Laden is not released as soon as possible, we will attack the judges, the lawyers and the security officials involved in their trial,” said a TTP spokesman. – Reuters, March 9

March 10, 2012 (KENYA): A grenade killed at least six people at a bus station in Nairobi. Kenyan police have linked the Somalia-based al-Shabab to the attack. – Voice of America, March 11

March 14, 2012 (SOMALIA): Al-Shabab militants launched a suicide bombing against the presidential palace in Mogadishu. The bomber, who blew himself up at the gates of the palace, killed at least five people. – BBC, March 14

March 15, 2012 (AFGHANISTAN): Afghan President Hamid Karzai demanded that NATO troops withdraw from rural areas, and the Taliban declared a suspension of peace talks with the United States. According to the Los Angeles Times, “In practical terms, both developments might prove largely symbolic. Karzai does not have the power to enforce specific demands as to where Western troops are deployed, and U.S. contacts with the Taliban were in the very early stages.” The two developments occurred in the wake of a March 11 incident where a rogue U.S. soldier allegedly killed 16 Afghan civilians. – Los Angeles Times March 15

March 16, 2012 (GLOBAL): According to documents recovered in Usama bin Ladin’s compound, provided to a Washington Post journalist, Bin Ladin wanted to assassinate U.S. President Barack Obama and David Petraeus in Afghanistan. According to the New York Times, “The documents include one in which Bin Laden asked his top lieutenant, Atiyah Abd al-Rahman, to find out from a Pakistani terrorist named Ilyas Kashmiri ‘the steps he has taken’ toward assassinating Mr. Obama and the top American general in the region.” All three of those men—Bin Ladin, Atiyah Abd al-Rahman and Ilyas Kashmiri—are now dead. – New York Times, March 16

March 16, 2012 (GLOBAL): Al-Qa`ida leader Ayman al-Zawahiri called on Pakistanis to join the Arab Spring uprisings and protest against their government. Al-Zawahiri said, “O our people in Pakistan! The Arab world around you is surging in a wave of revolution. Tyrants and oppressive rulers are falling. Why are you not making any move? Why are you not deposing these tyrants? Why are you not toppling these treacherous bribe-takers?” – CNN, March 16

March 20, 2012 (IRAQ): A wave of bombings rocked cities across Iraq, one week before the country hosts the annual Arab League summit for the first time in more than 20 years. The bombings killed at least 52 people. The Islamic State of Iraq claimed responsibility. – Christian Science Monitor, March 20; AP, March 21

March 22, 2012 (FRANCE): French police killed Mohammed Merah, a Frenchman of Algerian origin, after a 30-hour standoff at his apartment in a suburb of Toulouse. Merah was responsible for a shooting spree that began on March 11, and resulted in the deaths of three soldiers, three Jewish children and a rabbi. French authorities said that Merah operated alone, and that there is no evidence he had any contact with established terrorist groups. – AP, March 23; Reuters, March 22; Christian Science Monitor, March 23

March 25, 2012 (PAKISTAN): Tehrik-i-Taliban Pakistan warned that it would assassinate lawmakers in Pakistan if they decide to reopen NATO supply routes to Afghanistan. – Reuters, March 25

March 27, 2012 (SPAIN): Spanish police arrested a suspected al-Qa`ida member who “administered one of the world’s most important jihadist forums.” The man, who was not identified, is Jordanian-born with Saudi citizenship. According to Spanish authorities, he was known within al-Qa`ida as the “librarian,” and he worked 8-15 hours a day from home for al-Qa`ida, al-Qa`ida in the Islamic Maghreb and al-Qa`ida in the Arabian Peninsula. – Fox News, March 27

March 30, 2012 (AFGHANISTAN): A member of a U.S.-backed Afghan village police force opened fire on his fellow officers as they slept in Paktika Province, killing all nine of them. After the attack, the gunman took all their weapons, placed them in a pickup truck, and drove away. The Taliban claimed responsibility. – AP, March 30

March 30, 2012 (YEMEN): A suspected U.S. drone killed four al-Qa`ida in the Arabian Peninsula militants in Shabwa Province. A second suspected drone attacked a building used by militants, but it was apparently empty at the time of the strike. – AP, March 30

March 31, 2012 (KENYA): An assailant threw a hand grenade into a crowded restaurant in Mombasa, injuring five people. There was no claim of responsibility. – Reuters, March 31

March 31, 2012 (YEMEN): Militants linked to al-Qa`ida in the Arabian Peninsula launched a surprise attack on an army base in Lahj Province in southern Yemen. The militants were forced to retreat after airstrikes were called in. As a result of the fighting, 17 soldiers and 13 militants were killed.      – AP, March 31