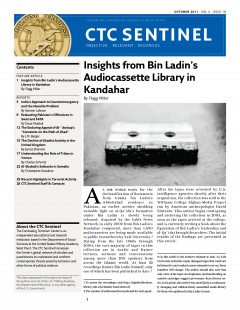 September 3, 2011 (YEMEN): A suicide bomber in a vehicle killed three Yemeni soldiers in an attack on an army post in Aden. – AFP, September 3

September 5, 2011 (PAKISTAN): Pakistani authorities announced the arrest of Younis al-Mauritani, identified as a senior member of al-Qa`ida, in Quetta, Baluchistan Province. The exact date of his capture was not clear. U.S. officials said that they would likely seek to question al-Mauritani. According to the Los Angeles Times, “Mauritani headed Al Qaeda’s international operations and had been planning attacks on a variety of U.S. economic interests, including gas and oil pipelines and hydroelectric dams, Pakistani officials said. He also had been planning to target American ships and oil tankers with speedboats filled with explosives. Mauritani had been asked by Al Qaeda leader Osama bin Laden to focus on targets of economic importance to the United States, Europe and Australia, Pakistani military officials said.” Two other al-Qa`ida operatives were arrested with him. – Reuters, September 6; Dawn, September 7; Los Angeles Times, September 8

September 7, 2011 (PAKISTAN): A suicide bomber in an explosives-laden vehicle attacked the residence of the deputy chief of the Frontier Corps in Quetta, Farrukh Shahzad. A second assailant detonated explosives attached to his body inside the deputy chief’s home as part of the coordinated attack. The bombs wounded Shahzad, killed his wife and injured one of his children. More than 20 people were also killed in the blasts. The Pakistani Taliban claimed responsibility and said that the attack was to avenge the recent capture of al-Qa`ida operative Younis al-Mauritani, who was apprehended in Quetta.  – Dawn, September 7; UPI, September 7

September 8, 2011 (NORTH AFRICA): EU counterterrorism coordinator Gilles de Kerchove warned that al-Qa`ida in the Islamic Maghreb (AQIM) is spreading its footprint around Africa and that countries such as “Mali, Niger and Mauritania need help” in combating the threat. Kerchove said that Algeria, on the other hand, is prepared to fight AQIM because “it has a powerful army.” – AP, September 8

September 9, 2011 (UNITED STATES): U.S. Secretary of State Hillary Clinton warned that al-Qa`ida was behind a specific, credible but unconfirmed report of a threat to harm Americans as the 10th anniversary of the 9/11 attacks approaches. The cities at risk are primarily New York and Washington. – Reuters, September 9

September 10, 2011 (SWEDEN): Authorities arrested four men on suspicion of plotting a terrorist attack in Sweden. Three of the men are of Somali descent, while the fourth is Iraqi. They were identified as Kulan Mohamud Abel, Mahamud Abdi Aziz, Mahmood Salar Sami and Mohamud Abdi Weli. – CNN, September 12

September 12, 2011 (GLOBAL): Al-Qa`ida chief Ayman al-Zawahiri released a new message to commemorate the 10th anniversary of the 9/11 attacks. In the speech, al-Zawahiri praised the Arab Spring as a “devastating blow” to the United States, saying that the uprisings “liberated the Arab people from handcuffs of fear and terror.” – CNN, September 13

September 13, 2011 (UNITED STATES): The director of the Central Intelligence Agency, David Petraeus, said that al-Qa`ida in the Arabian Peninsula (AQAP) represents the most serious terrorism threat to the United States. The director of the Federal Bureau of Investigation, Robert Mueller, separately warned that “homegrown” violent extremists also pose a serious threat to the U.S. homeland. – Voice of America, September 13

September 13, 2011 (AFGHANISTAN): Militants launched a coordinated attack in Kabul, and it took 20 hours for security forces to end the siege. The insurgents targeted the U.S. Embassy, other foreign embassies, NATO offices, and Afghan government offices. At least seven Afghans were killed. U.S. officials suspect that the Haqqani network was behind the operation. – Wall Street Journal, September 14; Sydney Morning Herald, September 16

September 13, 2011 (PAKISTAN): Militants fired a rocket-propelled grenade and AK-47 assault rifles at a school bus in Peshawar, killing four children and the driver. The Pakistani Taliban claimed responsibility, saying that the children on the bus were from a pro-government tribe. – Reuters, September 13

September 15, 2011 (PAKISTAN): A U.S. official informed reporters of the recent death of Abu Hafs al-Shahri, identified as al-Qa`ida’s chief of operations for Pakistan. According to CNN, “His cause of death was not disclosed, but the United States frequently uses armed aerial drones to target al Qaeda operatives inside Pakistan. Al-Shahri was seen as a possible successor to al Qaeda’s second-in-command, Atiyah Abdul Rahman, who was killed in late August, the U.S. official said. Little else was immediately known about him.” – CNN, September 15

September 15, 2011 (PAKISTAN): A suicide bomber attacked the funeral service of a tribal leader opposed to the Taliban, killing approximately 46 people. The incident occurred in Lower Dir District of Khyber Pakhtunkhwa Province. The Pakistani Taliban claimed responsibility, and said that they will target the funerals and weddings of anyone engaged in pro-government activity against them. – Guardian, September 15; CNN, September 16; AFP, September 17

September 16, 2011 (UNITED STATES): John Brennan, President Barack Obama’s top counterterrorism adviser, said that “the United States does not view our authority to use military force against al-Qaeda as being restricted solely to ‘hot’ battlefields like Afghanistan.” He further explained that since the United States is “in an armed conflict with al-Qaeda, the United States takes the legal position that, in accordance with international law, we have the authority to take action against al-Qaeda and its associated forces without doing a separate self-defense analysis each time…We reserve the right to take unilateral action if or when other governments are unwilling or unable to take the necessary actions themselves.” – Bloomberg, September 16

September 16, 2011 (NORTH AFRICA): The U.S. Embassy in Algiers warned that al-Qa`ida may attempt to launch missiles at planes chartered by foreign oil firms in North Africa. There are concerns that shoulder-fired missiles in neighboring Libya have been smuggled out of the country and into the hands of militants belonging to al-Qa`ida in the Islamic Maghreb. – AFP, September 16

September 18, 2011 (UNITED KINGDOM): British authorities arrested a number of men on terrorism charges. Three of the men were charged with plotting suicide bombings in the United Kingdom. – Guardian, September 25

September 18, 2011 (NIGERIA): A video obtained by Agence France-Presse purportedly features a suicide bomber alleged to have been responsible for the August 26, 2011 bombing against the UN headquarters in Abuja. The attack was claimed by Boko Haram, an Islamist sect based in northern Nigeria. According to the BBC, the video “shows the alleged bomber asking his family to understand his action, which he said was meant to send a message to the US president ‘and other infidels.’” – BBC, September 18

September 19, 2011 (PAKISTAN): A suicide bomber drove an explosives-laden truck into the home of a senior police official in Karachi, killing six police officers. A woman and a child were also killed. The intended target of the attack, however, survived. The Pakistani Taliban claimed responsibility. – CNN, September 19

September 19, 2011 (SAUDI ARABIA): The Saudi state news agency announced that the government will try 41 suspects who are accused of forming an al-Qa`ida-linked cell to attack U.S. forces based in neighboring Kuwait and Qatar. The group consists of 38 Saudis, one Qatari, one Yemeni and an Afghan. – Reuters, September 19

September 20, 2011 (TURKEY): A bomb ripped through the Turkish capital of Ankara, killing three people. The separatist Kurdish group the Kurdistan Freedom Hawks reportedly claimed responsibility. The group warned that the bombing was the “beginning of a series of attacks.” – al-Jazira, September 22

September 20, 2011 (AFGHANISTAN): Former Afghan president and current peace negotiator Burhanuddin Rabbani was assassinated by a suicide bomber in his Kabul home. The assailant hid the bomb in his turban. The blast also killed four other people. While the Taliban first took credit for the assassination, they later changed their initial statement and said that “media reports that claim responsibility are groundless. Right now we don’t want to talk.” – Voice of America, September 21; Sydney Morning Herald, September 23

September 20, 2011 (IRAQ): A gunman using a silencer killed three Iraqi policemen at a checkpoint in the Shi`a district of Shaab in northern Baghdad. – Washington Post, September 20

September 20, 2011 (SPAIN): Spanish authorities announced the arrest of a 24-year-old Cuban man on the Mediterranean island of Mallorca on suspicion of belonging to al-Qa`ida. According to authorities, the man “had undergone a process of radicalization in recent years.” CNN, referring to the government’s statement on the arrest, explained that “the suspect had 1,120 radical videos on the Internet, mostly produced by him, and he was the administrator of various internet channels, the Interior Ministry said. He used the internet for the radical indoctrination of other individuals, the statement said.” – CNN, September 20

September 20, 2011 (PAKISTAN): The commander of the Pakistan Army for the Swat region, Major General Javed Iqbal, was injured when his helicopter came under fire in Upper Dir District. – BBC, September 21

September 25, 2011 (INDONESIA): A suicide bomber detonated explosives at a church in central Java, killing approximately three people. According to Voice of America, “Witnesses said the suicide bomber mingled among the crowd at Bethel Injil Sepenuh Christian Church in Kepunton, Solo, before detonating the bomb that killed himself and wounded at least 20 others.” – AFP, September 25; Voice of America, September 26

September 27, 2011 (AFGHANISTAN): A roadside bomb killed 16 civilians, most of them children, in Herat Province. – Reuters, September 27

September 27, 2011 (YEMEN): Yemen’s Defense Ministry announced that Defense Minister Mohammad Nasser Ahmad survived a suicide bomb attack on his convoy in Aden. According to reports, a suicide bomber in a vehicle drove directly into the minister’s convoy as it drove out of a tunnel. – Gulf News, September 28

September 29, 2011 (IRAQ): U.S. Major General David Perkins, commander of the U.S. Army’s 4th Infantry Division and of all U.S. forces in northern Iraq, told reporters that al-Qa`ida in Iraq (AQI) has suffered a “dramatic decrease” in local and foreign fundraising. “We are seeing, instead of foreign aid coming in, in large amounts, they’re resorting to what I would call extortion, black marketing, robbery of jewelry stores, things like that,” Perkins told journalists. “And it’s devolving more into almost gang mafia-type activities…And so they are starting to, in some instances, turn against each other, which from our point of view is a good sign.” – AP, September 29

September 29, 2011 (PAKISTAN): According to various press reports, Pakistani authorities released from prison Amin al-Haq, considered a top-level al-Qa`ida figure who spent years serving as a bodyguard to Usama bin Ladin. He had been in Pakistani custody since approximately 2007. Anonymous officials in Pakistan were quoted in media reports as saying that al-Haq was not a “key player” in al-Qa`ida and “had no information of great value.” – CBS, September 29

September 30, 2011 (TURKEY): A bomb exploded outside a gendarme station in Turkey’s popular Mediterranean resort region of Antalya. According to CNN, “A local government official told CNN one man who appeared to be a suicide bomber was killed in the blast.” – CNN, September 30

September 30, 2011 (IRAQ): A car bomb tore through a funeral procession near a mosque in Babil Province, killing at least 10 people. – AFP, September 30