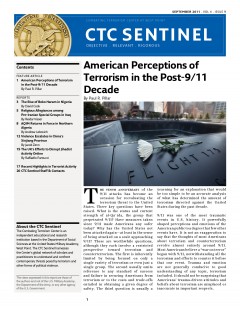 August 1, 2011 (PAKISTAN): A suspected U.S. aerial drone killed at least four alleged militants near Wana in South Waziristan Agency of the Federally Administered Tribal Areas. According to Voice of America, the drone strike “was the first reported in Pakistan’s tribal region since July 12.”  – Voice of America, August 1

August 2, 2011 (AFGHANISTAN): A suicide bomber in a vehicle detonated his explosives outside a small residential hotel popular with foreigners in Kunduz city. Two other militants then entered the hotel and fought Afghan police in a gunfight that lasted two hours. Four Afghan building guards were killed in the initial suicide blast. – AP, August 2

August 2, 2011 (IRAQ): A car bomb exploded outside a Christian church in Kirkuk, wounding at least 23 people. – Voice of America, August 2

August 3, 2011 (NIGERIA): A British man and an Italian who were kidnapped in May in northern Nigeria’s Kebbi State appeared in a hostage video, saying that their captors are from al-Qa`ida. According to Agence France-Presse, “The engineers work for the B. Stabilini construction company, founded by Italians but based in Nigeria. They were kidnapped on May 12 by gunmen who stormed their apartment in Birnin Kebbi, capital of Kebbi state. Police said at the time that a German colleague managed to escape by scaling a fence, while a Nigerian engineer was shot and wounded.” – AFP, August 3

August 4, 2011 (PAKISTAN): Three Pakistani naval officers are facing a court martial on charges of negligence related to an attack on a naval base in Karachi on May 22. According to the New York Times, “The court martial, a highly unusual disciplinary action for any Pakistan military officer, appeared to reflect the sense of outrage and embarrassment in the Pakistani armed forces over the attack, which revealed incompetence and possibly complicity with the insurgents by naval personnel inside the base.” – New York Times, August 4

August 6, 2011 (AFGHANISTAN): Taliban insurgents shot down a U.S. helicopter in the Tangi Valley of Wardak Province, killing 30 U.S. troops. More than 20 Navy SEALs were among the dead. Seven Afghan special forces and an interpreter were also reported to have been killed. The soldiers were reportedly on a mission to target a Taliban leader. – McClatchy Newspapers, August 6; Telegraph, August 7; AP, August 8

August 6, 2011 (PAKISTAN): A suicide bomber detonated his explosives in Mohmand Agency of the Federally Administered Tribal Areas. The bomber was the blast’s only casualty. – The Nation, August 7

August 8, 2011 (GLOBAL): A new audio message from al-Qa`ida leader Ayman al-Zawahiri appeared on Islamist web forums. In the message, al-Zawahiri accused the United States of hijacking the Egyptian revolution to preserve U.S. interests in the Middle East. He urged Egyptians to establish an Islamic state in their country. – AP, August 9

August 10, 2011 (AFGHANISTAN): The U.S. military released a statement claiming that the insurgents responsible for downing a U.S. helicopter on August 6 have been killed in an airstrike. “The strike killed Taliban leader Mullah Mohibullah and the insurgent who fired the shot associated with the Aug. 6 downing of the CH-47 helicopter, which resulted in the deaths of 38 Afghan and coalition service members,” the statement read. The insurgent leader who was the target of the original August 6 operation, however, remains at large. – Fox News, August 10; AFP, August 10

August 11, 2011 (INDONESIA): Umar Patek, an al-Qa`ida-linked Indonesian militant wanted in connection with the 2002 Bali bombings, was extradited from Pakistan to Indonesia where he will stand trial. Pakistani authorities captured Patek in Abbottabad on January 25, 2011. He is a senior member of Jemaah Islamiya. – AP, August 11

August 12, 2011 (EGYPT): Egyptian security officials said that they are preparing an operation against al-Qa`ida cells that have recently established a presence in the Sinai Peninsula. According to CNN, “The focus of their concern is the coastal area between el-Arish, a resort town of about 80,000 people on the Mediterranean, and Rafah on the border with Gaza.” – CNN, August 12

August 14, 2011 (GLOBAL): Al-Qa`ida leader Ayman al-Zawahiri released a new video message, calling on his followers to continue the fight against the United States despite the death of Usama bin Ladin. “Chase America, which killed the leader of the mujahidin [Bin Ladin] and threw his body into the sea,” al-Zawahiri said. “Go after it so that history will say that God enabled his worshippers to attack a criminal country which has spread corruption in the world.” He also said that the uprisings in Tunisia and Egypt have provided opportunities for al-Qa`ida to spread its message. – CBS News, August 15

August 14, 2011 (YEMEN): Fighting between Yemeni security forces and militants in and around Zinjibar in Abyan Province left at least 11 militants and two soldiers dead. – Voice of America, August 14

August 14, 2011 (PAKISTAN): A bomb exploded in a two-story hotel in Baluchistan Province, killing at least 11 people. There was no immediate claim of responsibility. – Voice of America, August 14

August 15, 2011 (NIGERIA): Nigerian police said they shot to death a would-be suicide bomber as he attempted to crash an explosives-laden vehicle into a police headquarters in Maiduguri, Borno State. Authorities blamed the attack on Boko Haram. – AAP, August 16; Vanguard, August 16

August 16, 2011 (UNITED STATES): According to Voice of America, “U.S. President Barack Obama says a ‘lone wolf’ terrorist, such as the gunman who killed 77 people in Norway last month, is a bigger concern than a large-scale terror attack.” – Voice of America, August 16

August 17, 2011 (SPAIN): Spanish police arrested a 37-year-old Moroccan man, Abdellatif Aoulad Chiba, on suspicion of being a member of al-Qa`ida in the Islamic Maghreb. Authorities charge that he ran an internet website that aimed to recruit members to conduct terrorist attacks. He also allegedly sought information on how to poison the water supply at campsites and tourist resorts. – Voice of America, August 17; Voice of America, August 20

August 17, 2011 (IRAQ): A suicide bomber blew himself up in the home of Tarmiya police chief Brigadier General Tawfeeq Ahmed, killing two people. The police chief was not home at the time of the attack. – AFP, August 17

August 18, 2011 (AFGHANISTAN): A roadside bomb killed 22 people, many of them women and children, in Herat Province. – Los Angeles Times, August 19

August 18, 2011 (AFGHANISTAN): A suicide bomber tried to detonate a truck bomb near the entrance of a U.S.-operated base in Gardez, Paktia Province, but did not make it through the front gates. Two Afghan guards were killed. – Fox News, August 18

August 19, 2011 (EGYPT): A suicide bomber killed a number of Egyptian soldiers on the Egyptian side of the border with Israel. – Jerusalem Post, August 19

August 20, 2011 (IRAQ): According to the New York Times, al-Qa`ida in Iraq warned “that it had launched a 100-attack campaign to exact revenge for the United States’ killing of Osama bin Laden.” – New York Times, August 20

August 21, 2011 (AFGHANISTAN): Villagers stoned to death a local Taliban commander and his bodyguard in Helmand Province. The villagers were angry at the militants for killing a 60-year-old man accused of aiding the Afghan government. – New York Times, August 22

August 22, 2011 (PAKISTAN): A CIA-operated drone killed Atiyah Abd al-Rahman, identified as al-Qa`ida’s second-in-command. According to the New York Times, “American officials described Mr. Rahman’s death as particularly significant as compared with other high-ranking Qaeda operatives who have been killed, because he was one of a new generation of leaders that the network hoped would assume greater control after Bin Laden’s death. Thousands of electronic files recovered at Bin Laden’s compound in Abbottabad, Pakistan, revealed that Bin Laden communicated frequently with Mr. Rahman. They also showed that Bin Laden relied on Mr. Rahman to get messages to other Qaeda leaders and to ensure that Bin Laden’s recorded communications were broadcast widely.” – New York Times, August 27

August 26, 2011 (NIGERIA): A suicide bomber in a vehicle rammed through the gates of the United Nations headquarters in Abuja, the capital of Nigeria. At least 18 people were killed in the blast. Boko Haram claimed responsibility. – Los Angeles Times, August 26

August 27, 2011 (AFGHANISTAN): A suicide bomber in a vehicle detonated his explosives near a bank in Lashkar Gah, Helmand Province, killing four people. Three children were among the dead. – AFP, August 27

August 27, 2011 (YEMEN): According to Radio Free Europe/Radio Liberty, “Yemen’s Defense Ministry has said the country’s navy sank a speed boat suspected of carrying explosives as the small vessel approached a Yemeni warship. Yemeni Naval Commander General Ruwais Mujawar said on the Defense Ministry website that the boat ignored several warning shots late on August 27 and that ‘naval forces then fired at the craft, which sank along with it occupants.’” – RFE/RL, August 28

August 28, 2011 (AFGHANISTAN): A group of suicide bombers attacked a NATO reconstruction base in Qalat, Zabul Province, but failed to breach the facility’s perimeters. – Voice of America, August 28

August 31, 2011 (PAKISTAN): An explosion tore through a crowd in a parking lot near a Shi`a mosque in Quetta, killing at least 10 people. Authorities believe that the explosion was from a suicide bomber in a vehicle. – New York Times, August 31