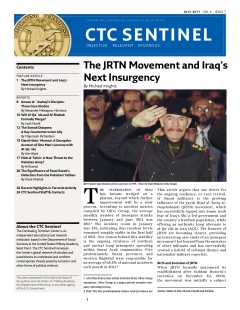 June 1, 2011 (PAKISTAN): Approximately 200-500 militants crossed into Pakistan from Afghanistan and attacked the Shaltalu security checkpoint in Upper Dir District of Khyber Pakhtunkhwa Province, killing 23 policemen and five civilians. A police officer in the region stated, “Militants were in military uniform when they attacked the check post and then went into forest.” The assault lasted through the following day. The Pakistani Taliban claimed responsibility. – International Business Times, June 1; AFP, June 1; Reuters, June 3

June 2, 2011 (UNITED STATES): U.S. Secretary of Homeland Security Janet Napolitano warned that Lashkar-i-Tayyiba “is a potent terrorist organization. It could be construed as a threat to the United States.” – AFP, June 2

June 3, 2011 (GLOBAL): U.S.-born al-Qa`ida operative Adam Gadahn appeared in a new video message calling on Muslims living in the United States to execute one-man terrorist acts using automatic weapons purchased at gun shows. “Let’s take America as an example,” Gadahn said. “America is absolutely awash with easily obtainable firearms. You can go down to a gun show at the local convention center and come away with a fully automatic assault rifle, without a background check, and most likely without having to show an identification card. So what are you waiting for?” Gadahn also suggested targeting major institutions, showing the logo of Exxon and Bank of America, and said, “I mean we’ve seen how a woman knocked the Pope to the floor during Christmas mass, and how Italian leader Berlusconi’s face was smashed during a public appearance. So it’s just a matter of entrusting the matter to Allah and choosing the right place, the right time, and the right method.” – ABC News, June 3

June 7, 2011 (GLOBAL): A 22-country survey found that approximately 75% of those polled believed that the United States was justified in killing al-Qa`ida chief Usama bin Ladin. According to Reuters, “The poll showed that countries that were part of the International Security Assistance Force (ISAF) in Afghanistan were among those with the highest approval rating, led by the United States with 95 percent, France and Britain with 87 percent and Australia, Belgium and Canada with 85 percent. In other ISAF nations, Poland had 83 percent who felt the killing was justified, followed by Italy (81 percent), Hungary (79), Germany (76), Sweden (71), Turkey (71) and Spain (70).” No Middle Eastern nations were polled, however. – Reuters, June 7

June 7, 2011 (GLOBAL): The head of Interpol said that al-Qa`ida and affiliated groups remain the world’s biggest threat to security despite the killing of Usama bin Ladin. “The airline and air industry continues to be a prime target for terrorists, but we’ve seen from recovered intelligence etc that they are also focusing a lot on mass transit,” said Interpol Secretary General Ronald Noble. “But airlines continue to be a special target.” – Reuters, June 7

June 7, 2011 (SOMALIA): Somali forces killed Fazul Abdullah Mohammad (also known as Fadil Harun) in Mogadishu. Mohammad was a top al-Qa`ida operative wanted for his role in the U.S. Embassy bombings in East Africa in 1998. A British security official later told reporters that “the Ritz Hotel in London and the elite private school Eton were among a handful of possible British terror targets that [Fazul] was considering before he was killed.” – Reuters, June 11; AP, June 17

June 9, 2011 (UNITED STATES): The FBI confirmed that a Minnesota man was involved in a suicide bombing in Somalia on May 30. The man was identified as Farah Mohamed Beledi. The terrorist and insurgent group al-Shabab earlier took credit for the May 30 attack, saying that “the bomber was Abdullahi Ahmed, 25, of Minneapolis.” – AP, June 7

June 9, 2011 (UNITED STATES): A Chicago court convicted Tahawwur Rana on two terrorism counts, but he was acquitted of the third charge that he helped plot the 2008 Mumbai terrorist attacks. He was, however, found guilty of helping plot a never-executed attack on a Danish newspaper, as well as providing support to Lashkar-i-Tayyiba. – Bloomberg, June 10

June 10, 2011 (GLOBAL): According to Bloomberg, “The U.S. is asking the United Nations Security Council to distinguish between Taliban and al-Qaeda followers in enforcing sanctions, a bid to encourage Taliban reconciliation with Afghanistan’s government.” – Bloomberg, June 10

June 13, 2011 (IRAQ): A suicide bomber in a vehicle detonated his explosives outside a police compound in Basra, killing five people. – Reuters, June 13

June 14, 2011 (IRAQ): Militants executed a complex attack and took control of a government building in Diyala Province. As stated in the Washington Post, “The assault on the provincial council headquarters in Baqubah, about 35 miles northeast of Baghdad, included a car bombing and attacks carried out by men armed with assault weapons and suicide bombers who detonated explosives-laden belts inside the building, security officials said.” – Washington Post, June 14

June 16, 2011 (NIGERIA): A car bomb exploded at the national police headquarters in the Nigerian capital of Abuja, killing at least two people. Initial reports stated that the blast was from a suicide bomber; however, subsequent evidence has cast that initial claim in doubt. The northern Nigeria based militant Islamist group Boko Haram claimed responsibility. – Voice of America, June 16; Bloomberg, June 20; AFP, June 22

June 17, 2011 (UNITED STATES): A 22-year-old Ethiopian-American, Yonathan Melaku, was arrested around 2 AM after he drew suspicion walking around Arlington Cemetery in northern Virginia. Upon being confronted at the cemetery, Melaku, a U.S. Marine Corps Reserve lance corporal, fled, and when police caught him they discovered a backpack with four ziplock bags containing a substance labeled ammonium nitrate, as well as a notebook with the words “al qaeda,” “Taliban rules,” “mujahidin,” and “defeated coalition forces.” The man, who joined the Marine Corps Reserve on September 4, 2007, had been awarded the National Defense Service Medal and the Selected Marine Corps Reserve medal. Upon further investigation, authorities charge that Melaku was responsible for a string of shootings at the Pentagon and other military targets in the Washington, D.C. area. – ABC News, June 18; AP, July 20

June 18, 2011 (AFGHANISTAN): Three militants armed with suicide vests and assault rifles stormed a police station in Kabul, killing four Afghan security force personnel and five civilians. According to Agence France-Presse, “One of the attackers detonated his explosives at the entrance to the compound, allowing his two accomplices into the building…Once inside, they fired at police, sparking a gun battle which lasted for around two hours before the pair were killed.” – AFP, June 18

June 19, 2011 (UNITED STATES): U.S. Defense Secretary Robert Gates told reporters that al-Qa`ida has been “significantly weakened. There’s just no two ways about it…We have taken a real toll on them over the last, particularly the last two years…The question is whether Zawahiri, the new leader taking bin Laden’s place, can hold these groups together in some kind of a cohesive movement, or whether it begins to splinter, and they become essentially regional terrorist groups that are more focused on regional targets. And we just don’t know that yet.” – AFP, June 19

June 22, 2011 (YEMEN): More than 60 prisoners escaped from the Mukalla prison in Hadramawt Province. Reports stated that 57 of the escapees are known al-Qa`ida militants. – Huffington Post, June 22

June 24, 2011 (GLOBAL): A U.S. official told reporters that documents seized in Usama bin Ladin’s Abbottabad compound reveal that the al-Qa`ida chief considered changing the group’s name to improve its “brand.” According to the Associated Press, “He suggested possibly Taifat al-Tawhed Wal-Jihad, or Monotheism and Jihad Group, and Jama’at I’Adat al-Khilafat al-Rashida, translated as Restoration of the Caliphate Group, the official said.” As stated by the Guardian, “A name change would allow al-Qaida to distance itself from growing criticism within the Islamic world that it was responsible for killing large numbers of Muslims, Bin Laden wrote.” – AFP, June 24; Guardian, June 24

June 25, 2011 (AFGHANISTAN): A suicide bomber in a vehicle killed at least 27 people at a hospital in Logar Province. According to the Los Angeles Times, “The attacker, driving a black sport utility vehicle, first targeted the Azra district police headquarters but was confronted by officers, district police chief Bakhtiyar Gul Ashrafi said. The assailant then drove toward a nearby 40-bed hospital filled with patients, visitors and staff members, detonating his explosives outside…The blast leveled the maternity ward and much of the rest of the building, trapping scores of people under the rubble.” – Los Angeles Times, June 25

June 25, 2011 (PAKISTAN): A husband and wife team carried out a suicide attack at a police station in Kolachi, South Waziristan Agency. – BBC, June 26

June 26, 2011 (IRAQ): A suicide bomber in a wheelchair detonated his explosives at the entrance to a police station in Tarmiya, 30 miles north of Baghdad. Three people were killed in the blast. – AP, June 27

June 27, 2011 (PAKISTAN): Senior Pakistani Taliban leader Fazal Saeed Zaimusht defected from Tehrik-i-Taliban Pakistan (TTP) and established his own group called Tehrik-i-Taliban Islami (TTI). Saeed was the TTP’s main asset in Kurram Agency, where he has the support of local tribesmen. He said that he will now fight against the TTP, as well as U.S. troops in neighboring Afghanistan. – Reuters, June 27