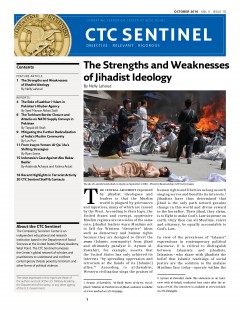 September 1, 2010 (AFGHANISTAN): A bomb killed Mohammad Hassan Taimuri, a senior Afghan government official in charge of organizing pilgrimages to the Islamic holy sites of Mecca and Medina. He was assassinated in Kandahar city. – Fox News, September 1

September 3, 2010 (GLOBAL): Qari Hussain Mehsud, a Taliban operative known as the “trainer of suicide bombers,” threatened to launch attacks on the United States and Europe “very soon.” He also said, “Shiites are also our target because they too are our enemies.” – Telegraph, September 3; Reuters, September 3

September 3, 2010 (PAKISTAN): A suicide bomber detonated explosives near a mosque belonging to the minority Ahmadi sect in Mardan District, killing at least one person. – RFE/RL, September 4

September 3, 2010 (PAKISTAN): Two suspected U.S. drone strikes killed at least 12 people in North Waziristan Agency of the Federally Administered Tribal Areas. One strike targeted a house with suspected militants inside on the outskirts of Miran Shah, while the other destroyed a car traveling through Datta Khel. – AAJ News, September 3

September 3, 2010 (TAJIKISTAN): A suicide bomber in an explosives-laden vehicle drove into a police station in the northern city of Khujand, killing a senior police official. Authorities blamed the bombing on the Islamic Movement of Uzbekistan, yet a previously unknown group called Jamaat Ansarullah in Tajikistan claimed responsibility. – AFP, September 3; Reuters, September 9

September 6, 2010 (TAJIKISTAN): A bomb ripped through a nightclub frequented by locals in Dushanbe, wounding five people. Authorities blamed radical Islamists, although the party responsible was not immediately clear. – Reuters, September 6

September 8, 2010 (PAKISTAN): A suspected U.S. aerial drone fired missiles at a house owned by a member of the Haqqani network in North Waziristan Agency of the Federally Administered Tribal Areas. Six militants were killed. – AP, September 8

September 9, 2010 (RUSSIA): A suicide bomber detonated an explosives-laden vehicle outside a busy market in Vladikavkaz in North Ossetia. At least 16 people were killed. The Battalion of Martyrs Riyadus-Salikhiyn claimed responsibility for the attack. – Los Angeles Times, September 10; Reuters, September 17

September 9, 2010 (PAKISTAN): Police in Pakistan arrested three suspects over links to the failed Times Square bombing in New York City on May 1, 2010. The men were reportedly detained in Islamabad two weeks ago. – Australia Network News, September 9

September 9, 2010 (SOMALIA): A suicide bomber in a vehicle exploded at the gate to Mogadishu’s airport, killing at least 14 people. Two other suicide bombers on foot tried to enter the terminal building, but failed. At the time of the bombing, a high-ranking international delegation was meeting with leaders of Somalia’s Transitional Federal Government at the airport. – GaroweOnline, September 9; al-Jazira, September 10

September 10, 2010 (DENMARK): Authorities arrested a man in downtown Copenhagen after he apparently detonated a bomb in the restroom of the busy Hotel Jørgensen. Media reports speculated that the man may have been a suicide bomber. The man survived injuries sustained from the bomb explosion. – BBC, September 10

September 12, 2010 (PAKISTAN): A suicide bomber’s explosives detonated prematurely in Pakistan-administered Kashmir. The bomber, who died in the blast, was identified as a local resident. There were no other casualties. – AFP, September 12

September 15, 2010 (GLOBAL): Al-Qa`ida second-in-command Ayman al-Zawahiri released a new audiotape, stating, “Nine years after the beginning of the crusade against Afghanistan and then Iraq, here is the crusade reeling after being weakened by the blows of your devoted sons, the mujahidin.” He also railed against the “corrupt state of affairs in Pakistan.” – AFP, September 15

September 19, 2010 (PHILIPPINES): Philippine militants reportedly killed Abdukarim Sali, a member of the Abu Sayyaf Group who helped plan and execute the kidnapping of three Americans and 17 Filipinos from a popular resort in 2001. – New York Times, September 19

September 20, 2010 (FRANCE): France raised its terrorism threat level due to concern of an imminent attack from al-Qa`ida in the Islamic Maghreb. – Telegraph, September 20; Voice of America, September 22

September 20, 2010 (SOMALIA): A suicide bomber detonated his explosives at the gates of the presidential palace in Mogadishu, wounding two soldiers. – Reuters, September 20

September 23, 2010 (INDONESIA): Mohammed Sofyan Tsauri, a former Indonesian police officer, told authorities that he helped train 170 members of a new terrorist network in Aceh Province. Tsauri, who is being charged for multiple crimes, said that he became “affiliated with al-Qa`ida” after he left the police force in 2008. – AP, September 23

September 24, 2010 (AFGHANISTAN): Multiple suicide bombers attacked a NATO base in Paktia Province, but there were no ISAF casualties. At least five militants were killed in the attempt to breach the perimeter of the base in Gardez. – Reuters, September 24

September 29, 2010 (SPAIN): Spanish authorities announced the arrest of a U.S. citizen suspected of sending money to al-Qa`ida in the Islamic Maghreb. The suspect, Mohamed Omar Debhi, is of Algerian descent and was arrested in Barcelona. On September 30, however, authorities released Debhi due to lack of evidence, although the investigation is still open. – BBC, September 29; Wall Street Journal, October 1

September 29, 2010 (YEMEN): Suspected al-Qa`ida fighters ambushed a convoy of cars that were carrying the governor of Shabwa Province along with senior Yemeni security officials. The governor was not injured, although one of the convoy’s guards was killed. – AP, September 29

September 30, 2010 (AFGHANISTAN): A suicide bomber in a vehicle detonated his explosives next to a NATO convoy in Kandahar, killing three civilians. – Reuters, September 30