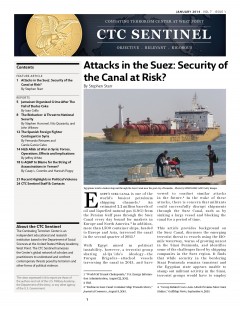 November 3, 2013 (IRAQ): A suicide bomber detonated an explosives-laden vehicle outside the headquarters of a police battalion in Ba`quba, Diyala Province. A second suicide bomber also blew himself up, while a third suicide bomber managed to enter the compound and detonate his explosives at the entrance to the main building. The blasts killed three policemen. – AFP, November 3

November 3, 2013 (YEMEN): A car bomb seriously wounded a Yemeni intelligence officer in Aden. There was no immediate claim of responsibility. – AFP, November 3

November 7, 2013 (IRAQ): Gunmen entered the home of the leader of a local Awakening Council in Tikrit, killing him and five of his family members as they slept. – CNN, November 7

November 7, 2013 (IRAQ): A suicide bomber in a vehicle targeted the main entrance to a military base in Tarmiyya, 55 miles north of Baghdad. After the explosion, a suicide bomber on foot entered the base and detonated his explosives. The bombs killed at least 16 people. – CNN, November 7

November 7, 2013 (PAKISTAN): Tehrik-i-Taliban Pakistan (TTP) elected Maulana Fazlullah as their new leader after the death of Hakimullah Mehsud in a U.S. drone strike on November 1. Fazlullah, considered a hardliner, was the head of the TTP’s Swat faction. – al-Jazira, November 7; New York Times, November 7

November 8, 2013 (GLOBAL): Al-Qa`ida chief Ayman al-Zawahiri released a new audio message ordering the abolishment of the Islamic State of Iraq and the Levant (ISIL). Al-Zawahiri said that Jabhat al-Nusra is the only al-Qa`ida representative fighting in Syria. The al-Qa`ida chief said that the leader of the Islamic State of Iraq (ISI), Abu Bakr al-Baghdadi, “made a mistake” by creating the ISIL without al-Zawahiri’s permission. Al-Baghdadi continues to defy al-Zawahiri’s orders and still operates in Syria. – RFE/RL, November 8; AFP, November 8

November 10, 2013 (PAKISTAN): Nasiruddin Haqqani, a senior leader in the al-Qa`ida-linked Haqqani network, was shot to death by armed men riding a motorcycle on the outskirts of Islamabad. Nasiruddin was considered a key financier and emissary for the network. No one claimed responsibility for his killing. – AP, November 12; AP, November 11

November 12, 2013 (FRANCE): French authorities arrested four men in the Paris region on charges of belonging to a jihadist network sending fighters to Syria. Three of the men were born in France, while one was born in Morocco. Agence France-Presse quoted an “informed source” who said that an estimated 440 people from France were either currently fighting in the Syrian conflict, planning to go and fight, or had already returned. – AFP, November 15

November 16, 2013 (AFGHANISTAN): A suicide bomber detonated an explosives-laden vehicle near a camp where Afghan tribal leaders are scheduled to meet next week to discuss a security agreement with the United States. The explosion killed 13 people. – Wall Street Journal, November 17; UPI, November 16

November 16, 2013 (RUSSIA): Russian police killed five suspected militants, including the alleged mastermind of the October 21 suicide bombing of a bus in Volgograd, in the village of Semender. – RFE/RL, November 16

November 18, 2013 (ISRAEL): Court documents filed by Israel’s Justice Ministry revealed that the country has been holding suspected al-Qa`ida operative Samir al-Baraq for the past three years. Al-Baraq is allegedly an expert in biological warfare. He was arrested while trying to cross into Israel from Jordan in 2010. – Voice of America, November 18

November 19, 2013 (LEBANON): Two suicide bombers exploded outside the Iranian Embassy in Beirut, killing at least 23 people. The Abdullah Azzam Brigades, which is linked to al-Qa`ida, claimed responsibility for the attack. The group’s statement of responsibility said that “the operations in Lebanon will continue until two demands are met. The first is that Iran’s party [Hizb Allah] withdraws from Syria. The second is the release of our prisoners from Lebanon’s unjust jails.” – AFP, November 19

November 19, 2013 (SOMALIA): Fighters from al-Shabab attacked a police station in Beledweyne, killing at least 16 people. A suicide bomber in a vehicle blasted open an entrance to the compound, and then militants entered on foot spraying gunfire. – AFP, November 19

November 26, 2013 (IRAQ): A suicide bomber killed at least seven soldiers at the entrance to an army base in Tarmiyya, north of Baghdad. – AFP, November 26

November 27, 2013 (TURKEY): A Turkish Interior Ministry report said that approximately 500 Turks have crossed the border into Syria to fight with al-Qa`ida-linked jihadists of Jabhat al-Nusra and the Islamic State of Iraq and the Levant. – Dawn, November 28

November 29, 2013 (IRAQ): Iraqi authorities discovered the bodies of 18 men—including four policemen, an army major and two tribal chiefs—in farmland near Tarmiyya, north of Baghdad. All of the men had been shot in the head and chest. Similar incidents of violence occurred throughout Iraq, including in Salah al-Din Province where authorities found seven men with their throats slit. – AFP, November 29

November 29, 2013 (AFGHANISTAN): A suicide bomber who concealed explosives in his turban injured an Afghan lawmaker for Zabul Province in Kabul. – RFE/RL, November 29

December 3, 2013 (AUSTRALIA): Authorities arrested two Sydney men on foreign incursion charges. One of the men was allegedly recruiting fighters for Syria and facilitating their travel, while the second man was preparing to travel to Syria. Authorities argued that the recruiter had already helped at least six other Australians travel to Syria to fight. – Australian, December 3

December 3, 2013 (IRAQ): A suicide bomber and a mortar attack on a government compound killed 10 people in Tarmiyya. – BBC, December 3

December 5, 2013 (YEMEN): A suicide bomber detonated an explosives-laden vehicle at the gate to the Yemeni Defense Ministry. Gunmen in a separate vehicle entered the facility and opened fire on soldiers, doctors and nurses working at a hospital inside. Approximately 52 people were killed. According to Reuters, it marked Yemen’s “worst militant assault in 18 months.” Al-Qa`ida in the Arabian Peninsula (AQAP) claimed responsibility. On December 21, however, an AQAP senior leader apologized for the attack, saying that one of their fighters disobeyed orders and attacked the hospital attached to the Defense Ministry. – Reuters, December 5; Voice of America, December 6

December 6, 2013 (SOMALIA): A car bomb killed a Somali member of parliament outside the prime minister’s office in Mogadishu. – AFP, December 6

December 12, 2013 (KENYA): An unknown assailant threw a hand grenade at a van carrying British tourists in Mombasa. The grenade hit the window of the vehicle, but it failed to explode. – AP, December 12

December 12, 2013 (PAKISTAN): A roadside bomb exploded next to a Pakistani military convoy in North Waziristan Agency of the Federally Administered Tribal Areas. Four soldiers were killed. Ansar al-Mujahidin claimed responsibility, saying it was in retaliation for a recent U.S. drone strike in Hangu District. – AFP, December 12

December 12, 2013 (YEMEN): A suspected U.S. drone strike killed at least 15 people in Bayda Province. Yemeni locals said that the missiles hit a convoy of vehicles traveling to a wedding party and that the dead were all civilians. Yemeni officials, who did not specify who conducted the airstrike, later said that the targets of the strike were senior al-Qa`ida leaders whose van hid in a civilian convoy. – AP, December 12; AP, December 14; Voice of America, December 14

December 13, 2013 (UNITED STATES): U.S. authorities arrested Terry Lee Loewen, of Kansas, for attempting to detonate a car bomb at Wichita Mid-Continent Airport. Loewen’s arrest was part of an FBI undercover investigation, and the “bomb” used by the defendant was inert. Authorities allege that Loewen, who worked at the airport, cited Usama bin Ladin and Anwar al-`Awlaqi as his inspirations.  – Time Magazine, December 13; Telegraph, December 13

December 13, 2013 (IRAQ): Twenty-five suspects held on terrorism charges escaped from a prison north of Baghdad. Some of the men faced the death penalty. Two Iraqi guards were killed during the escape. – New York Times, December 13

December 13, 2013 (SYRIA): Fighters from the Islamic State of Iraq and the Levant (ISIL), which is linked to al-Qa`ida, reportedly kidnapped at least 120 Kurdish civilians from a village near the border with Turkey in Aleppo Province. It was just the latest incident of the ISIL targeting Kurds. – al-Jazira, December 13

December 14, 2013 (MALI): A suicide bomber in an explosives-laden vehicle destroyed the only operating bank in Kidal, one day before a second round of parliamentary elections. The explosion also killed two Senegalese UN peacekeepers. – Reuters, December 14

December 16, 2013 (SWEDEN): Swedish authorities revealed that at least 75 people have left their country to fight in Syria since mid-2012. – Daily Times, December 16

December 17, 2013 (LEBANON): A car bomb exploded near a Lebanese Hizb Allah base in Bekaa in eastern Lebanon. It was not immediately clear if a suicide bomber caused the explosion. Two Hizb Allah members were killed. – BBC, December 17; AFP, December 17; Daily Star, December 19

December 18, 2013 (SYRIA): In his first televised interview, the leader of the al-Qa`ida-linked Jabhat al-Nusra militant group in Syria, Abu Muhammad al-Julani, said that his group was not seeking to rule Syria, but that they would seek to ensure that the country is ruled by Shari`a (Islamic law). – Reuters, December 19

December 18, 2013 (PAKISTAN): A suicide bomber in an explosives-laden vehicle killed at least four Pakistani soldiers at a military checkpoint in the Mir Ali area of North Waziristan Agency. – The News International, December 18

December 18, 2013 (SOMALIA): Gunmen killed six people after attacking a convoy carrying doctors to a hospital near Mogadishu. Three Syrians were among the dead. – Voice of America, December 18

December 26, 2013 (PAKISTAN): Warren Weinstein, an American contractor kidnapped from his home in Lahore in August 2011 by al-Qa`ida, appealed to U.S. President Barack Obama to help negotiate his release. – Voice of America, December 26

December 27, 2013 (UNITED STATES): Sinh Vinh Ngo Nguyen of Garden Grove, California, pleaded guilty to a federal terrorism charge after admitting that he tried to assist al-Qa`ida by providing weapons training. His sentencing date is scheduled for March 21, and he faces a maximum of 15 years in federal prison. – AP, December 27

December 30, 2013 (RUSSIA): A suicide bomber detonated his explosives in a trolleybus during rush hour in Volgograd, killing at least 14 people. – Bloomberg, December 30

December 31, 2013 (YEMEN): A suicide bomber detonated an explosives-laden vehicle at a police headquarters in Aden. Militants then tried to force their way into the compound, but police prevented them from entering the building. At least three Yemeni soldiers were killed. Al-Qa`ida in the Arabian Peninsula claimed responsibility. – Reuters, December 31; AFP, December 31; Reuters, January 2