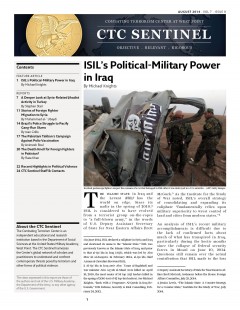 July 3, 2014 (SYRIA): The Islamic State in Iraq and the Levant seized control of Syria’s largest oil field, al-Omar, from Jabhat al-Nusra. Jabhat al-Nusra took control of the field in November 2013, and claimed to be producing around 10,000 barrels of oil per day. – Reuters, July 3

July 4, 2014 (IRAQ): The leader of the Islamic State in Iraq and the Levant, Abu Bakr al-Baghdadi, purportedly led prayers at Mosul’s Great Mosque, according to video footage. According to the Telegraph, “The notoriously secretive jihadi, who has never before been seen in public, chose the first Friday prayer service of Ramadan to make an audacious display of power in the city that the Sunni Islamists have now controlled for three weeks.” – Telegraph, July 5

July 4, 2014 (AFGHANISTAN): Taliban militants set fire to dozens of fuel trucks on the outskirts of Kabul, claiming that the trucks were used to supply foreign troops in Afghanistan. – news.com.au, July 5

July 4, 2014 (PAKISTAN): A suicide bomber killed two people near a mosque in the Saddar area of Karachi. – Pakistan Today, July 4

July 5, 2014 (SOMALIA): An al-Shabab suicide bomber in an explosives-laden vehicle killed at least five people outside the parliament building in Mogadishu. – Voice of America, July 5

July 8, 2014 (AFGHANISTAN): A suicide bomber killed at least 16 people, including four Czech soldiers, in an attack near a clinic in Parwan Province. – AP, July 8

July 8, 2014 (SOMALIA): Al-Shabab militants fought their way into the presidential palace in Mogadishu, exchanging gunfire with Somali troops inside. The fighting inside the heavily-fortified compound lasted for at least two hours before the Somali government said that the area was secure. – AP, July 8

July 9, 2014 (GLOBAL): U.S. Secretary of Defense Chuck Hagel warned that the Islamic State in Iraq and the Levant (ISIL) should not be underestimated. According to Hagel, ISIL is a serious threat to the United States. “This is a force that is sophisticated,” he said. “It’s dynamic. It’s organized. It’s well financed. It’s competent.” – Voice of America, July 9

July 9, 2014 (FRANCE): According to a report in Le Parisien, an Algerian citizen living in France, who was in contact with al-Qa`ida in the Islamic Maghreb (AQIM), suggested attacking the Louvre, the Eiffel Tower and a nuclear plant in France. French security services disrupted the plot, and arrested the French resident, after decrypting messages passed between the two on the Shumukh al-Islam forum. – RT, July 10

July 10, 2014 (UNITED STATES): Gufran Ahmed Kauser Mohammed, a naturalized U.S. citizen who once lived in California, faces up to 15 years in prison after pleading guilty to providing material support to al-Shabab and Jabhat al-Nusra. Mohammed, as well as co-defendant Mohamed Hussein Said, was charged with conspiring to provide a combined total of $25,000 to terrorist groups. The two were arrested in Saudi Arabia and brought back to Miami for trial. – Miami Herald, July 11

July 11, 2014 (SYRIA): Jabhat al-Nusra, al-Qa`ida’s affiliate in Syria, said that it is establishing an Islamic emirate in the rebel-held parts of Aleppo. – McClatchy Newspapers, July 12

July 12, 2014 (MALAYSIA): Eight gunmen in military fatigues attacked the Mabul Water Bungalows Resort at Mabul Island, a diving haven popular with Westerners. One police officer was killed in the attack, but no tourists were injured. The militants approached the luxury resort by boat. Authorities suspect that the Abu Sayyaf Group was responsible. – Huffington Post, July 13; Free Malaysia Today, July 13

July 13, 2014 (NIGERIA): In a new video, Boko Haram chief Abubakar Shekau claimed responsibility for two attacks that occurred on June 25, one of which was a bombing in Lagos. Nigerian authorities previously said that the explosion in Lagos was a result of a cooking gas explosion, but Shekau accused them of trying to cover up the attack. In the video, Shekau also expressed support for the Islamic State in Iraq and the Levant. – AFP, July 13

July 14, 2014 (GLOBAL): Al-Qa`ida in the Islamic Maghreb (AQIM) released a statement rejecting the caliphate that was established by the Islamic State in Iraq and the Levant (ISIL). Confirming its allegiance to al-Qa`ida chief Ayman al-Zawahiri, AQIM criticized ISIL for failing to consult with jihadist leaders before declaring the caliphate. – Reuters, July 14

July 14, 2014 (SYRIA): The Islamic State in Iraq and the Levant (ISIL) expelled rival rebel groups from Deir al-Zour, including Jabhat al-Nusra and Ahrar al-Sham. According to the Syrian Observatory for Human Rights, “the Islamic State [ISIL] is now in control of the entire Deir al-Zour Province apart from a few areas and the military airport that the government is in control of.” – Reuters, July 14

July 14, 2014 (MALI): A suicide bomber killed a French soldier in Gao, northern Mali. It marked the ninth death of a French Foreign Legion soldier since the French intervened in Mali to halt the advance of al-Qa`ida-linked militants in January 2013. – Reuters, July 15

July 15, 2014 (GLOBAL): The U.S. State Department added a Norwegian citizen, who was allegedly trained as a bombmaker by al-Qa`ida in the Arabian Peninsula (AQAP), to its list of designated terrorists. Anders Cameroon Ostensvig Dale traveled to Yemen in 2008, where he was trained by AQAP to “make bomb-belts, improvised explosive devices, and larger explosives used in car bombs.” – ABC News, July 15

July 15, 2014 (GLOBAL): Jordanian cleric Abu Qatada, who is being tried on terrorism charges in Jordan, said that the “announcement of a caliphate by the Islamic State [ISIL] is void and meaningless because it was not approved by jihadists in other parts of the world…This group does not have the authority to rule all Muslims and their declaration applies to no one but themselves.” – AFP, July 16

July 15, 2014 (AFGHANISTAN): A suicide bomber in an explosives-laden vehicle killed at least 89 people near a busy market and a mosque in Paktika Province. It marked the deadliest insurgent attack on civilians since the U.S.-led invasion in 2001. – AP, July 15

July 18, 2014 (KENYA): Al-Shabab stopped a bus and sprayed its passengers with bullets, killing seven people. The incident occurred near Witu in Lamu County, which is near Kenya’s coast. – al-Jazira, July 19

July 22, 2014 (AFGHANISTAN): A suicide bomber on a motorbike killed at least four foreigners inside a compound in Kabul. – AFP, July 22

July 22, 2014 (LIBYA): A double suicide bombing on a military base in Benghazi killed at least four Libyan soldiers. – AFP, July 22

July 22, 2014 (YEMEN): Al-Qa`ida in the Arabian Peninsula announced that it is preparing to establish an Islamic emirate in eastern Hadramawt Province. On July 11, Jabhat al-Nusra, another al-Qa`ida affiliate, said that it was establishing an Islamic emirate in the rebel-held parts of Aleppo in Syria. – Voice of America, July 22

July 26, 2014 (UNITED STATES/SYRIA): Jabhat al-Nusra, al-Qa`ida’s affiliate in Syria, released a video of an American suicide bomber who blew himself up at a Syrian army post in May 2014. The man, Moner Mohammad Abu Salha, is believed to be the first U.S. national to conduct a suicide bombing in Syria. It was also revealed that after training with Jabhat al-Nusra, Salha returned to the United States for months before traveling back to Syria to conduct his suicide attack. – al-Arabiya, July 26; ABC News, July 31