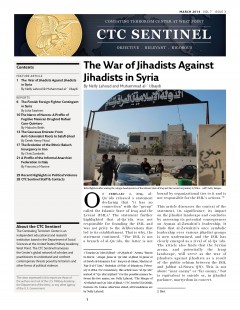 February 2, 2014 (GLOBAL): Al-Qa`ida released a statement declaring that it has “no connection” with the Islamic State of Iraq and the Levant (ISIL), effectively disowning the group that used to be known as the Islamic State of Iraq (ISI). According to the statement, “al-Qa`ida announces it is not linked to the Islamic State of Iraq and the Levant, as it was not informed of its creation…[and] did not accept it.” It further said that the ISIL is “not a branch of al-Qa`ida, has no links to it, and [al-Qa`ida] is not responsible for its acts.” The statement comes after al-Qa`ida chief Ayman al-Zawahiri ordered the ISIL to disband and return to Iraq in November 2013. In the November message, al-Zawahiri said that Jabhat al-Nusra is al-Qa`ida’s representative in Syria. The ISIL, however, continues to operate in Syria in defiance of al-Zawahiri’s orders. – AFP, February 3; RFE/RL, November 8

February 3, 2014 (LEBANON): A suicide bomber wounded at least two people while traveling in a passenger van in Choueifat, south of Beirut. The target of the attack was not immediately clear. – Los Angeles Times, February 3

February 4, 2014 (PAKISTAN): A suicide bomber killed at least nine people near a restaurant in Peshawar. – The News International, February 4

February 8, 2014 (SYRIA): The Islamic State of Iraq and the Levant’s (ISIL) chief for Dayr al-Zur, Abu Dajana, was killed during clashes with Jabhat al-Nusra. Abu Dajana, a Libyan, was considered a top military commander. – al-Arabiya, February 8

February 10, 2014 (IRAQ): The Islamic State of the Iraq and the Levant (ISIL) killed 15 soldiers part of an army unit in Mosul, Ninawa Province. The unit was providing security for an oil pipeline that runs from Iraq into Turkey. According to Iraqi officials cited in the New York Times, the ISIL militants drove up to the army unit “in more than a dozen sport utility vehicles…They beheaded five soldiers, shot nine dead and hanged one on a wall, torturing him to death.” The New York Times further pointed out that the attack revealed that the ISIL “has moved beyond Anbar Province, west of Baghdad, where it controls Falluja and parts of Ramadi, and extended its reach into territory throughout the country.” – New York Times, February 11; AP, February 11

February 10, 2014 (IRAQ): An instructor training other militants on suicide bombings accidentally detonated an explosives belt at a militant camp north of Baghdad, killing himself and 21 other militants. The militants all belonged to the Islamic State of Iraq and the Levant. – New York Times, February 10

February 11, 2014 (GLOBAL): U.S. Defense Intelligence Agency Director Lieutenant General Michael Flynn told the Senate Armed Services Committee that “the current instability in Syria presents a perfect opportunity for al-Qa`ida and associated groups to acquire these weapons [of mass destruction] or their components. While Syria’s stockpiles are currently under the control of the regime, the movement of these weapons from their current locations, for disposal or other reasons, drastically increases the risk of these weapons or their components falling into the wrong hands. There is also the very real possibility that extremists in the Syrian opposition could overrun and exploit chemical and biological weapons storage facilities before all of these materials are removed.” – National Journal, February 12; Defense Intelligence Agency, February 11

February 11, 2014 (GLOBAL): U.S. National Intelligence Director James Clapper told the Senate Armed Services Committee that there are an estimated 7,500 foreign fighters from 50 different countries currently in Syria. According to Clapper, among these foreign fighters are “a small group of al-Qa`ida veterans who have aspirations for external attacks in Europe, if not the [U.S.] homeland itself.” – National Journal, February 12

February 11, 2014 (MALI): The Movement for Unity and Jihad in West Africa (MUJAO) said that they kidnapped a team of Red Cross workers who were reported missing in Mali on February 8. They were reportedly kidnapped on the road between Kidal and Gao. – al-Jazira, February 11

February 11, 2014 (EGYPT): Militants detonated explosives at a gas pipeline in the Sinai Peninsula, causing pipeline technicians to halt the flow of gas while they extinguished the resulting fire. – AP, February 11

February 13, 2014 (YEMEN): A car bomb exploded outside Sana`a Central Prison in the Yemeni capital. After the explosion, heavily armed militants attacked the prison, killing seven people and freeing 29 inmates. The escapees include 19 convicted al-Qa`ida prisoners. According to the Associated Press, “Yemen has witnessed major jailbreaks in the past that have fueled militancy, including one in February 2006 when 21 al-Qa`ida militants dug a tunnel and fled the intelligence prison in Sana`a. Many of those who fled at that time are now the group’s most wanted and dangerous men…” – AP, February 13

February 14, 2014 (SYRIA): A car bomb exploded outside a mosque in the southern Syrian village of Yadouda, killing dozens of people. – AP, February 14

February 14, 2014 (SOMALIA): A United Nations report warned that “systematic abuses” by the Somali government have allowed weapons to be diverted into the hands of al-Shabab militants and warlords. The report even alleged that one key adviser to the Somali president had planned weapons deliveries to al-Shabab. – BBC, February 14

February 15, 2014 (NIGERIA): Suspected Boko Haram militants dressed in military uniforms attacked the Christian farming village of Izghe in Borno State, killing at least 106 people. The militants specifically singled out male residents. According to CNN, “The gunmen, who arrived in the village riding in trucks and on several motorcycles, opened fire and hacked male residents they had assembled in the village square. They moved door to door in search of male residents who were hiding.” – CNN, February 18

February 16, 2014 (PAKISTAN): The Pakistani Taliban’s Mohmand wing announced that they executed 23 Pakistani paramilitary soldiers held captive since 2010. The faction said that they decided to execute the soldiers in retaliation for continued security operations against Islamist militants in Pakistan. – Washington Post, February 16

February 19, 2014 (YEMEN): Suspected al-Qa`ida in the Arabian Peninsula (AQAP) militants gunned down a well-known ultraconservative Islamist in Hadramawt Province. The Islamist had previously called on AQAP to leave his town due to an increase in drone strikes as a result of their presence, which endangered civilian lives. – AP, February 19

February 19, 2014 (LEBANON): Two suicide bombers detonated explosives-laden vehicles near the Iranian cultural center in Beirut, killing at least four people. One of the bombers was a Palestinian. – Reuters, February 20

February 20, 2014 (GLOBAL): A United Nations report found that the leadership of some al-Qa`ida affiliates is seeing a generational shift from older members to men in their 30s and 40s. According to the report, “younger commanders and fighters have a different perspective on international affairs, have the potential to generate propaganda that chimes with their generation more easily, and can also challenge their own leadership on tactics and targets.” The report also found that while al-Qa`ida has lost “its former strength…the ideas, inspiration and networks generated by al-Qa`ida continue to reverberate.” – BBC, February 20

February 20, 2014 (UNITED STATES): Ahmad al-Darbi, a long-held Saudi captive at Guantanamo Bay, pleaded guilty to terrorism charges. As part of the plea deal, his sentence may be limited to 15 years, although he is expected to testify against Abd al-Rahim al-Nashiri, who is charged with orchestrating the attack on the USS Cole in 2000. – Miami Herald, February 20; AP, February 20

February 20, 2014 (AFGHANISTAN): A suicide bomber killed a security guard at a hospital in Kabul. – AP, February 20

February 21, 2014 (AFGHANISTAN): Three militants planning a suicide bombing in Kandahar Province were killed when the bomb exploded prematurely. A child was also killed in the blast. – UPI, February 22

February 22, 2014 (LEBANON): A suicide bomber in an explosives-laden vehicle killed at least three people at a military checkpoint in Hermel, located near the Syrian border. The area is a stronghold of Lebanese Hizb Allah. Jabhat al-Nusra, al-Qa`ida’s affiliate in Syria, claimed responsibility. – CNN, February 22

February 23, 2014 (IRAQ): A bomb exploded on a highway between Baghdad and Mosul, killing three police and four detainees who had been captured during a raid. – AFP, February 23

February 23, 2014 (SYRIA): A suicide bomber killed Abu Khalid al-Suri, a rebel leader with ties to al-Qa`ida chief Ayman al-Zawahiri, in Aleppo. Although no one claimed responsibility, suspicion fell on the Islamic State of Iraq and the Levant (ISIL). According to the BBC, “Al-Suri was reportedly sent to Syria by al-Qa`ida to end the infighting between the ISIL and other rebel groups.” Eyewitness accounts suggest that five men entered the headquarters for Ahrar al-Sham in Aleppo and opened fire, with one of the assailants detonating a suicide bomb. The attack killed six other fighters from Ahrar al-Sham, in addition to al-Suri. – BBC, February 24

February 24, 2014 (PAKISTAN): A suicide bomber in a vehicle detonated explosives outside the Iranian Consulate in Peshawar, killing two Pakistani paramilitary soldiers. The attack was claimed by Mast Gul, who, according to Dawn, was “once acclaimed in Pakistan for his role fighting Indian rule in Kashmir.” Gul’s spokesman told Reuters that they will “continue to target Iranian installations and the Shi`a community everywhere.” – Dawn, February 24

February 25, 2014 (SYRIA): Abu Muhammad al-Julani, the head of Jabhat al-Nusra, warned the Islamic State of Iraq and the Levant (ISIL) that it would be driven from Syria if it did not accept mediation by clerics. The ISIL is suspected of assassinating Abu Khalid al-Suri, a prominent al-Qa`ida emissary who was killed by a suicide bomber on February 23. Jabhat al-Nusra is al-Qa`ida’s affiliate in Syria, while al-Qa`ida has disowned the ISIL. – BBC, February 25

February 26, 2014 (UNITED KINGDOM): A court in the United Kingdom sentenced Michael Adebolajo to life in prison without parole for killing off-duty British soldier Lee Rigby on a London street in May 2013. Adebolajo admitted that he was inspired by al-Qa`ida. His accomplice, Michael Adebowale, was sentenced to life with a minimum of 45 years in prison because of his younger age and lesser role in the attack. – AP, February 26

February 26, 2014 (SYRIA): The Islamic State of Iraq and the Levant (ISIL) said that Christians in the city of Raqqa, which it controls, will have to pay taxes and hold religious rituals indoors. – AFP, February 26

February 27, 2014 (IRAQ): A suicide bomber drove an explosives-laden vehicle into the guesthouse of a prominent pro-government tribal shaykh in Haditha, Anbar Province. The chief, Shaykh Saeed Fleih al-Osman, was killed in the attack, along with six of his militiamen. – AP, February 28

February 27, 2014 (SOMALIA): A suicide bomber drove an explosives-laden vehicle into a café popular with members of the Somali security forces in Mogadishu, killing at least 12 people. Most of the dead were Somali soldiers. Al-Shabab claimed responsibility. – CNN, February 27; Reuters, February 27

February 28, 2014 (SYRIA): Fighters from the Islamic State of Iraq and the Levant (ISIL) retreated from the key Syrian town of Azaz in the face of growing tension with rival rebel factions. The ISIL had controlled Azaz, a strategic town near the Turkish border, for five months. According to the Washington Post, “The exit came a day ahead of a deadline issued by Jabhat ¬al-Nusra, the official al-Qa`ida affiliate in Syria, for ISIL to cease confronting rival rebels or face a new war. Commanders speculated that the ISIL fighters, who have resisted previous attempts at mediation, chose to pull out from Azaz to reinforce strongholds elsewhere in preparation for further conflict.” – Washington Post, February 28