Press Roll up for Yemen Report 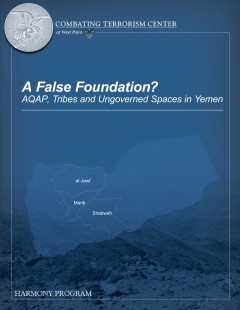 The CTC’s recent report “A False Foundation? AQAP, Tribes and Ungoverned Spaces in Yemen” has received extensive media coverage since its release. Pleas find below some highlights from recent reporting on the CTC’s latest report.

Associated Press–The killing of American-born al-Qaeda preacher Anwar al-Awlaki may weaken the Yemen branch’s ability to attack the United States, but the only way to eliminate the threat is to take out its Yemen leaders, according to a new report by a top Army counterterrorism center.  Terror chief Nasir al-Wahayshi, who used to work for Osama bin Laden in Afghanistan, and other key figures are the real secret to the group’s survival, and are equally committed to attacks on the U.S. homeland, according to the report released Monday by the U.S. Military Academy’s Combating Terrorism Center. Click here to read the article.

CNN– Just days after the deaths of two top propagandists for al Qaeda in the Arabian Peninsula (AQAP) by a CIA drone strike, a new study by the Combating Terrorism Center at West Point looks at the central, strategic leadership of the group and its ability to continue as a serious threat to the U.S. homeland. The author of the study, who remains anonymous because of his further studies in the region, spent a year looking at whether tribal connections helped AQAP achieve success, and while the study didn’t find strong connections among tribes, it did find that the group’s key to success has been its ability to remain strategically focused on its core objectives. While the deaths of Anwar al-Awlaki and Samir Khan last Friday may be important steps toward disabling the group’s strong recruitment arm, “Neither of those individuals were tied into the group’s local operations,” says Gabriel Koehler-Derrick, who edited the anonymously written study. Click here to read the article.

Toronto Star–Top American officials say Yemen’s Al Qaeda branch is the greatest threat facing the West, but according to an extensive study by the U.S.’s top military academy, it is also the most misunderstood.  The report published Monday questions assertions by U.S. President Barack Obama and others that Friday’s killings of American ideologues Anwar al Awlaki and Samir Khan are a “major blow” to Al Qaeda in the Arabian Peninsula. “While a tactical victory for the U.S. counterterrorism efforts, (the deaths) are unlikely to impact AQAP’s operations in Yemen or its desire to attack the interests of the United States,” states the study by West Point’s Combating Terrorism Center. Click here to read the article.

Council on Foreign Relations “Must Read” File— This report by the Combating Terrorism Center attempts to disaggregate the threat posed by al-Qaeda in the Arabian Peninsula from the sources of instability surrounding it, by examining the group’s strategy, tactics and objectives from a local perspective.  Click here to read the article.