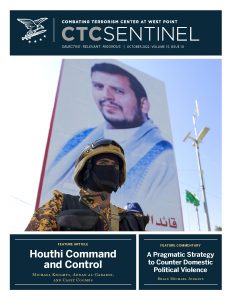 From the Editor
With a truce in Yemen that had lasted six months elapsing in early October, there is concern that Yemen will once again be plunged into civil war and that the Tehran-allied Houthi militants will once again threaten Saudi Arabia and the United Arab Emirates with drones and ballistic missiles. In this month’s feature article, Michael Knights, Adnan al-Gabarni, and Casey Coombs provide a “fuller understanding of the Houthi political-military leadership, its core motivations, and the nature and extent of Iranian and Lebanese Hezbollah influence within the movement.” Their study argues that “the Houthi movement is now more centralized and cohesive than ever, in part due to close mentoring from Lebanese Hezbollah and the Islamic Revolutionary Guard Corps.” They conclude that “the Houthi Jihad Council is emerging as a remarkable partner for Iran and the Houthi-Iran relationship and should no longer be viewed as a relationship of necessity, but rather a strong, deep-rooted alliance that is underpinned by tight ideological affinity and geopolitical alignment. The emergence of a ‘southern Hezbollah’ is arguably now a fact on the ground.”

In this month’s feature commentary, Brian Michael Jenkins thinks through what elements are necessary for a pragmatic and non-partisan strategy to counter domestic political violence. He writes that “Americans appear to reside in separate cultural and political camps. Increasing threats against public officials and displays of public hostility have prompted growing apprehension of future political violence. It is in this fragile and fraught environment that any efforts to contain politically motivated violence will have to operate.” He stresses that it is important to recognize “the limits of what law enforcement can do while addressing the greater challenge of national reconciliation.”

Our interview is with Air Vice-Marshal Sean Corbett, the founder and CEO of IntSight Global, a management consultancy within the intelligence and security sector with a focus on open-source intelligence. During his 30-year service in the Royal Air Force, Air Vice-Marshal Corbett worked in key leadership roles, including as Chief of U.K. Intelligence in Afghanistan and was the first non-U.S. Deputy Director of a major U.S. intelligence agency in serving in Washington, D.C., at the Defense Intelligence Agency (DIA).