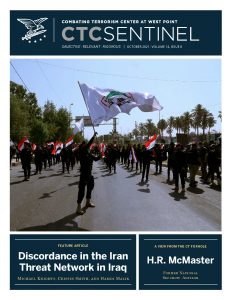 From the Editor
In this month’s feature article, Michael Knights, Crispin Smith, and Hamdi Malik examine the increased discordance within the Iran Threat Network militias in Iraq (muqawama) based on their detailed tracking of recent dynamics for the “Militia Spotlight” platform at the Washington Institute for Near East Policy. They find that “while the IRGC-QF (Islamic Revolutionary Guard Corps-Quds Force) still runs Iran’s covert operations inside Iraq, they face growing difficulties in controlling local militant cells. Hardline anti-U.S. militias struggle with the contending needs to de-escalate U.S.-Iran tensions, meet the demands of their base for anti-U.S. operations, and simultaneously evolve non-kinetic political and social wings.” The authors assess that, having under-performed in the recent elections, the muqawama will likely prioritize a bottom-up approach to building up their political base. And they warn that “any shift from Iran’s de-escalatory position, perhaps linked to a failure of U.S.-Iran nuclear talks—or a more significant loss of Iranian influence over muqawama factions—could trigger a sustained escalation of muqawama operations against the U.S.-led coalition in 2022 and beyond.”

In this month’s interview, former U.S. National Security Advisor Lieutenant General (Ret) H.R. McMaster provides his perspective on what led to the Taliban takeover in Afghanistan.

In a commentary, Don Rassler argues that the United States needs to better leverage its vast terrorism data holdings by creating a new terrorism and counterterrorism data action plan that exploits the power of data-science and artificial intelligence driven approaches. That plan, he writes, should include five key precepts: 1) reinvest in and advance core terrorism data, 2) strategically leverage captured material, 3) better develop and utilize counterterrorism data, 4) practice data alchemy, and 5) automate basic and other analytical tasks, and augment data.

Jonathan Schroden looks at lessons learned from the 2021 collapse of the Afghan National Defense and Security Forces’ (ANDSF). He writes that six themes that emerge are: “the ANDSF collapse was months—if not years—in the making; the United States did not give the ANDSF everything they needed to be independently successful; the ANDSF did put up a fierce fight in many areas; the ANDSF were poorly served by Afghan political leaders; the ANDSF were poorly served by their own commanders; and the Taliban strategy overwhelmed and demoralized the ANDSF. From these themes, there are three key lessons: the ANDSF’s failure had many fathers; the U.S. model of security assistance requires reform; and greater emphasis on non-material factors (e.g., morale) is needed in future security force assessments.”

Commentary: Data, AI, and the Future of U.S. Counterterrorism: Building an Action Plan

Discordance in the Iran Threat Network in Iraq: Militia Competition and Rivalry

Lessons from the Collapse of Afghanistan’s Security Forces