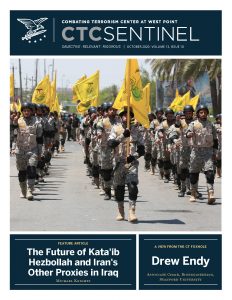 In this month’s feature article, Michael Knights assesses the future of Kata’ib Hezbollah (KH) and Iran’s other proxies in Iraq. He notes that in the wake of the death of KH’s founder and leader Abu Mahdi al-Muhandis in a U.S. airstrike on January 3, 2020, “KH is still the engine room of anti-U.S. attacks in Iraq but it is less politically agile and operates in a more hostile counterterrorism environment where deniability and secrecy have become more important again.” He assesses that the “the Islamic Revolutionary Guard Corps Quds Force is also leaning on a more diversified model in Iraq, drawing on non-KH factions like Saraya al-Jihad and Saraya al-Ashura, and engaging more directly with Iraq’s minorities, including Sunni communities and the Shi`a Kurdish Faylis and Turkmen. History may be repeating itself as Iran develops new smaller and more secure Iraqi cells that are reminiscent of the formation of Kata’ib Hezbollah itself.”

Our interview is with Drew Endy, Associate Chair, Bioengineering, Stanford University, who has served on the U.S. National Science Advisory Board for Biosecurity. He argues the United States urgently needs a bio strategy to take advantage of rapid advances in biotechnology, protect against the growing danger posed by its potential malevolent use, and prevent the United States from permanently falling behind as a biopower. “First, we need to demonstrate operational mastery of cells by learning to build them. Second and third, we need to build and secure the bio net. And we have to do this now, within the decade, so that we can translate these advances as infrastructure undergirding a uniquely American bio economy that projects power while advancing life, liberty, pursuit of happiness. If we do this, then we have a chance of taking infectious disease off the table. If we don’t develop and implement a coherent bio strategy, it’s game over, not to be dramatic.”

In early August 2020, fighters loyal to the Islamic State captured the town and port of Mocimboa da Praia in Mozambique’s northernmost province of Cabo Delgado. They have yet to be dislodged from the town. Tim Lister examines a jihadi insurgency in Mozambique that has grown in sophistication and reach.

Back into the Shadows? The Future of Kata’ib Hezbollah and Iran’s Other Proxies in Iraq

Jihadi Insurgency in Mozambique Grows in Sophistication and Reach

Twenty Years after the USS Cole Attack: The Search for Justice