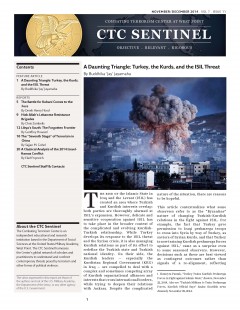 A Daunting Triangle: Turkey, the Kurds, and the ISIL Threat
By Buddhika ‘Jay’ Jayamaha

The rise of the Islamic State in Iraq and the Levant (ISIL) has created an area where Turkish and Kurdish interests overlap: both parties are thoroughly alarmed at ISIL’s expansion. However, delicate and sensitive cooperation against ISIL has to take place in the broader context of the complicated and evolving Kurdish-Turkish relationship. While Turkey develops its response to the ISIL threat and the Syrian crisis, it is also managing Kurdish relations as part of its effort to redefine the Turkish state and Turkish national identity. On their side, the Kurdish leaders are compelled to deal with a complex and sometimes competing array of Kurdish organizational alliances and interests that cross international borders, while trying to deepen their relations with Ankara. This article contextualizes what some observers refer to as the “Byzantine” nature of changing Turkish-Kurdish relations in the fight against ISIL. For example, the fact that Turkey gave permission to Iraqi peshmerga troops to cross into Syria by way of Turkey, as saviors of Syrian Kurds, and that Turkey is now training Kurdish peshmerga forces against ISIL, came as a surprise even to some seasoned observers. However, decisions such as these are best viewed as contingent outcomes rather than signals of a re-alignment, reflecting short- and medium-term tactical and strategic decisions by Turkish and Kurdish leaders.

A Daunting Triangle: Turkey, the Kurds, and the ISIL Threat

The Battle for Kobani Comes to the Fore

The “Seventh Stage” Of Terrorism in China

A Classical Analysis of the 2014 Israel-Hamas Conflict