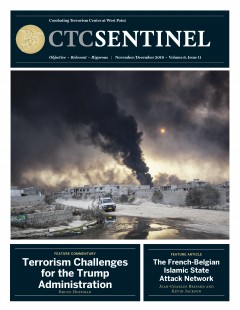 The incoming Trump administration faces serious counterterrorism challenges, which Bruce Hoffman argues in our cover article are as significant as any faced since the period around 9/11 with a strengthening global al-Qa`ida network posing the most serious long-term threat. With Islamic State- and al-Qa`ida-aligned groups present in more countries than ever before, Hoffman argues that a reconciliation at some point between the groups is not impossible, and with a large cohort of foreign fighters trained in Syria and Iraq available to them in the future, he stresses the United States urgently needs to reboot its counterterrorism strategy.

In our other cover article, which we published online ahead of the rest of the issue to mark the one-year anniversary of the Paris terror attacks, Jean-Charles Brisard and Kévin Jackson assess the French-Belgian nexus in the Islamic State’s external operations wing responsible for the Paris and Brussels attacks. The article’s revelations on how the attack cell infiltrated Europe were featured as the lead front-page story in Le Monde and in many other newspapers across Europe.

Brian Glyn Williams and Robert Souza assess the so-called Russian counterterrorism intervention in Syria, arguing it risks both strengthening the Islamic State and unleashing a terrorist blowback on Russian soil, as well as deepening the sectarian tensions across the Middle East that fuel terrorism. With a terrorist attack broadcasted live over the internet seemingly only a matter of time, Jason Burke examines how evolving media technology is increasing the impact of what the Syrian jihadi strategist Abu Musab al-Suri called “individual terrorism,” making attacks by lone actors or small autonomous cells an increasingly attractive paradigm for global jihadis facing territorial losses in Syria and Iraq.

Tim Lister, who just returned from Iraq, examines the “uphill struggle” to dislodge the Islamic State from Mosul based on six weeks of reporting on and around the frontlines. With Iraqi forces engaged in the most intense urban warfare seen since Beirut in the 1980s, he argues, the longer fighting lasts, the more likely the coalition put together with considerable mediation from the United States will begin to fray or that a humanitarian catastrophe will disrupt or even overwhelm the offensive.

The Islamic State’s External Operations and the French-Belgian Nexus

The Consequences of Russia’s ‘Counterterrorism’ Campaign in Syria

The Age of Selfie Jihad: How Evolving Media Technology is Changing Terrorism

The Mosul Campaign: From Here to the Horizon

The Global Terror Threat and Counterterrorism Challenges Facing the Next Administration