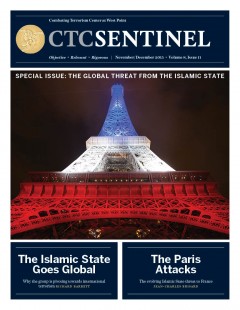 From the Editor
With the attacks in Beirut, the skies above the Sinai, and Paris, history may judge the final months of 2015 as the period during which the Islamic State pivoted toward international terrorism, as Richard Barrett outlines in one of our two cover stories. The other, by Jean-Charles Brisard, provides new information on the Paris plot and the evolving threat to France. Guy van Vlierden profiles the “ringleader” of the Paris attack. Zack Gold argues the Metrojet attack may create a backlash against the Islamic State in the Sinai. Hassan Rabih examines the threat to Lebanon. Our interview is with Zainab Ahmad, a federal prosecutor in New York involved in several Islamic State-linked cases. This December saw the first deadly Islamic State–inspired attack in America. Lorenzo Vidino and Seamus Hughes examine the threat after San Bernardino. We also feature a frontline view of the war on the Islamic State by Tim Lister and a deep dive into the group’s operations in southern Syria by Aaron Zelin and Oula Alrifai.

The Paris Attacks and the Evolving Islamic State Threat to France

A Frontline Report: The Ground War Against the Islamic State

A View from the CT Foxhole: An Interview with Zainab N. Ahmad, Asst. U.S. Attorney

The Islamic State in Southern Syria

San Bernardino and the Islamic State  Footprint in America

The Beirut Bombings and the Islamic State’s Threat to Lebanon