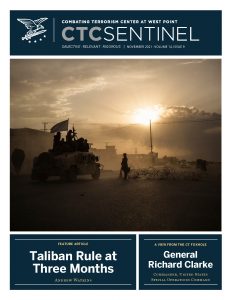 From the Editor
It has been three months since the Taliban entered Kabul and retook control of Afghanistan. According to the head of the U.N. World Food Programme, “23 million people [are now] marching toward starvation. 95% of Afghans don’t have enough food. The economy is collapsing. Winter is coming. This is going to be hell on earth.” In this month’s feature article, Andrew Watkins assesses the Taliban’s efforts to rule Afghanistan so far. He writes that “The Taliban have busied themselves consolidating control, reacting swiftly and harshly to perceived threats. They have not clearly defined the scope or structure of their state, nor have they shared long-term plans for their rank-and-file, many of which continue to operate as they did before August 15, 2021. Taliban leaders have demonstrated the continued primacy of maintaining internal cohesion, a longstanding trait that will likely stunt the group’s response to Afghanistan’s impending economic and humanitarian crises.” Watkins writes that from their perspective, “accepting aid that might sustain their state would prove worthless if doing so fueled a fissure within their own organization. The Taliban would become the very thing their origin story professes they rose up to eradicate and replace: a fractious constellation of militant bands. To put it another way, if Afghanistan’s compounding crises pose the Taliban with the prospect of either failing to provide for the desperate needs of the Afghan people or their own potential fragmentation, the Taliban will put their own organization first.”

This month’s interview is with General Richard D. Clarke, commander of U.S. Special Operations Command. In a commentary, Jerome Bjelopera argues that “given that the U.S. national security establishment has taken up great power competition (GPC) as its primary concern recently, and terrorism has slipped from the top position, it is time for the security policy community to place terrorism within a new conceptual framework, one that combines terrorists, violent criminals, drug traffickers, insurgents, and others under the heading of violent non-state actors (VNSA).” Interviews that Matthew Bamber conducted with 43 former Islamic State civilian employees shed light on two distinct categories: those who became full members of the group and those who did not. He writes that “there are significant differences in how these two categories were treated by the Islamic State, the positions they were able to fill, the financial benefits they received, and the processes through which they joined and left Islamic State employment … Understanding the nuances is important in assessing the culpability of the Islamic State’s civilian workers and the danger they may pose in the future.”

“Without Us, There Would Be No Islamic State:” The Role of Civilian Employees in the Caliphate