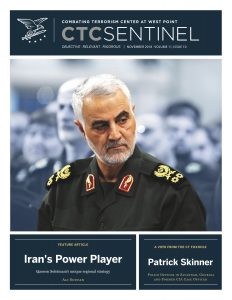 In our cover article, Ali Soufan profiles Major General Qassem Soleimani, the long-serving head of Iran’s Quds Force who the U.S. government has accused, among other things, of support for terrorism and involvement in a 2011 plot to assassinate the Saudi ambassador to the United States. Soufan outlines how Soleimani has masterminded Tehran’s efforts to project its power across the Middle East using a unique strategy of blending militant and state power, built in part on the model of Hezbollah in Lebanon. Soufan argues that with nationalist sentiment on the rise in Iran in the wake of the U.S. withdrawal from the nuclear agreement and the ongoing regional tussle with Saudi Arabia, Soleimani’s popularity would make him the natural front-runner if Iran chooses to adopt a military presidency.

Our interview is with Patrick Skinner who during the decade after 9/11 worked in counterterrorism for the CIA in Afghanistan and Iraq. Last year, he began working as a police officer in his hometown of Savannah, Georgia, in an effort to make a difference closer to home. Skinner reflects on how lessons learned from his time as a CIA case officer and as a local police officer could apply to counterterrorism and counterinsurgency strategy and tactics overseas.

Drawing on thousands of pages of judicial documents and investigative files, Nuno Pinto outlines the alleged key role played by two Portugal-based extremists in a transnational Islamic State network whose alleged attack plans were thwarted by arrests in Strasbourg and Marseille in November 2016. The case raises concerns that European countries in which security services are less geared up to confront terrorist activity are being used as logistical hubs by jihadi terrorists. In the wake of the Islamic State’s deadly attack on Western tourists in Tajikistan in July 2018, Damon Mehl examines the threat the group poses to the country. With the Islamic State having lost almost all of its territory in Syria and Iraq, Michael Munoz looks at how the group’s propaganda efforts may evolve in the future.

A View from the CT Foxhole: Patrick Skinner, Police Officer in Savannah, Georgia, and Former CIA Case Officer in Afghanistan and Iraq

The Portugal Connection in the Strasbourg-Marseille Islamic State Terrorist Network

Selling the Long War: Islamic State Propaganda after the Caliphate