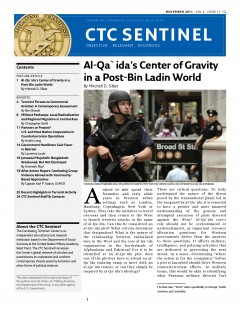 Al-Qa`ida’s Center of Gravity in a Post-Bin Ladin World
By Mitchell D. Silber

To determine where the center of gravity lies for the al-Qa`ida threat in a post-Bin Ladin world, this article will examine al-Qa`ida’s role, or lack thereof, in the formation of the network in 16 of the most important jihadist terrorist plots launched against the West since 1993. It finds that individuals in the West, rather than al-Qa`ida core, underpinned the majority of these plots, as these men sought out militant training overseas and then were redirected by al-Qa`ida core operatives to plot against targets in Western cities. The article concludes with an overall assessment of the al-Qa`ida threat in the wake of key leadership losses recently suffered by the group.