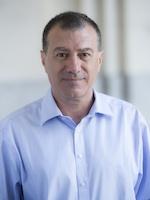 Mr. Shlomi Eldar, a prominent reporter with decades of experience in the West Bank and Gaza Strip visited the CTC on April 11th.  Mr. Eldar provided a guest lecture to SS383, the Comparative Politics of the Middle East, on Hamas and its role in the Israeli-Palestinian conflict.  In the afternoon he also hosted a discussion with CTC faculty and Terrorism Minor Cadets of his documentary Precious Life which was nominated for an academy award in 2011 and was one of two featured films shown to Terrorism Minors during this semester’s movie lunch series.  For more on Mr. Eldar’s background please visit his page at the Wilson Center.