Flag of the “Islamic State of Palestine in the Gaza Strip” 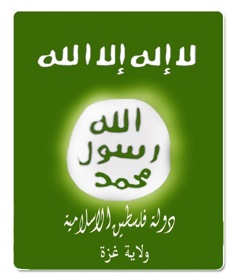 The image is purportedly the flag of the self-declared Islamic State of Palestine in the Gaza Strip. It is identical to the flag/logo of al-Qa’ida in Iraq (AQI)/Jama’at al-Tawhid wal-Jihad, which has been adopted by the umbrella organization, the Islamic State of Iraq, and al-Qa’ida in the Arabian Peninsula (AQAP). It may have been utilized by or created for the likes of Jund Ansar Allah (JAA), one of several jaljalat (loud echo or shrill) groups operating in the Gaza Strip whose members are thought to have fought in Afghanistan and Iraq. Notably, JAA declared Gaza an Islamic emirate in August 2009. The similarity with the AQI/AQAP logo indicates at the very least the desire to be affiliated with the al-Qa’ida network. The green color of the logo is significant and highly unusual, as green is considered the traditional color of the Prophet Muhammad’s tribe, and has been adopted as a sacred color based on Qur’anic verses (76:21; 18:65-82) and a reliable hadith (prophetic tradition or report) that associates green with “universally good things.”