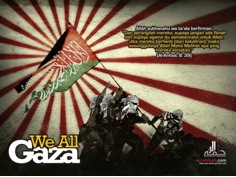 The dominant element of the image is the red rays, which are significant, as red is the color of fire, blood, passion, impulse and danger. Light rays are often used to illuminate other symbols or text in an image to give them an aura of divinity and/or afterlife. At the center of the rays is a Palestinian flag that bears the shahada (Islamic testimony of faith holding that there is no god but Allah and that Muhammad is his messenger). The flag is held by a group of men, identified as fighters by the fact that their faces are covered by the kafiyya (head scarf). The text is a Qur’anic quote (Q 8:39), written in Indonesian.

It seems that the image, via the posture of the soldiers and the way they are holding the flag, is trying to imitate the famous United States Marine Corps War Memorial (also known as the Iwo Jima Memorial), located in Arlington, Virginia. By doing so, the image evokes notions of bravery and sacrifice on the battlefield and absolute commitment to the mission/struggle.