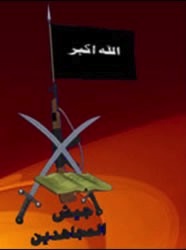 The image is the logo of the group known as Jaysh al-Mujahidin, which operates in Iraq. The logo includes several classic elements from jihadi propaganda. First, there is a black banner with the text of the takbir (the words “Allah Akbar,” or “God is greatest”), the mast of which is an automatic rifle.

According to hadith (prophetic tradition or report), the black flag was the battle flag of the Prophet Muhammad and it was carried into battle by many of his companions. The image of the black flag has been used as a symbol of religious revolt and engagement in battle (i.e., jihad). In the contemporary Islamist movement, the black flag is used to evoke notions of jihad and of reestablishing the Islamic Caliphate.

Second, there are two crossed swords, which suggest a desire on the part of the designer to link the image to early Islamic history and the first generation of Muslims. Swords are seen as noble weapons that embody the religious purity, nobility and righteousness that is associated with the Prophet, his companions and their successful military campaigns. Thus, the swords help depict current jihadi activities as modern extensions of those campaigns and lend them an aura of legitimacy. Finally, the image contains a Qur’an hovering over the caption: “jaysh al-mujahidin” (“army of the mujahidin”).