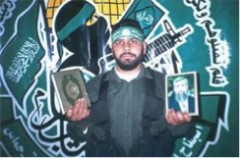 It is believed that Muslim martyrs will be highly rewarded in the afterlife for their sacrifice and that they hold a special position in heavenly paradise. It is therefore not surprising that martyrdom is a central theme in jihadi visual propaganda.

This specific image is a representation of a figure with his last will and testament. Such images almost always include a weapon, a Qur’an and other symbolic items. The combination of symbolic elements highlights the religious importance of martyrdom and its violent nature, while also facilitating the group’s efforts to emphasize its commitment to the cause. Here, the figure (outfitted with an explosive vest) is holding a Qur’an in his right hand and a picture in his left hand of what looks like Salah Mustafa Shhade, who was a Hamas operative assassinated by the Israeli Defense Forces on 23 July 2002. Behind the Qur’an to his right is a green banner bearing the shahada (Islamic testimony of faith holding that there is no god but Allah and that Muhammad is his messenger). Since green is considered the traditional color of the Prophet Muhammad’s tribe and has been adopted as a sacred color based on Qur’anic verses (76:21; 18:65-82) and a reliable hadith (prophetic tradition or report) that associates green with “universally good things,” green flags (regardless of the text) always conjure up historical, genealogical and religious notions of the Prophet and early Islam.