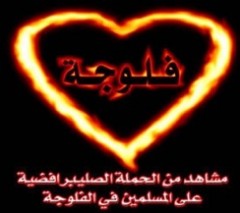 Jihadi propaganda frequently utilizes important political events or violent struggles occurring within Islamic communities to mobilize recruits and support. These images draw attention to events that have helped to shape the current jihadi movement, and they allow the propagandists to reinterpret the events through their own ideological and cultural framework. A key example of this is the way in which jihadi groups present past and contemporary defeats as examples of violent oppression and injustice inflicted upon the Muslim world, and hence as justification for jihadi activism. Here, the slogan reads: “faluja: mashahid min al-hamla al-salibrafidiyya ‘ala al-muslimin fil-faluja” (“Fallujah: scenes from the Crusader-Shi’a campaign against Muslims in al-Fallujah”). This image was the cover of a video, produced by “the Global Islamic Media Front,” GIMF. It contains extremely disturbing footage from the battle of  Fallujah with voices of eyewitnesses in the background.