Image of al-Aqsa Mosque in Flames 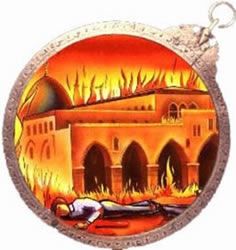 While Muslims across sectarian lines share a reverence for many holy sites, some sites hold special significance for certain groups. For instance, the al-Aqsa mosque (located in Jerusalem) is recognized and revered by all Muslims, but it is also a powerful symbol of Palestinian nationhood. In fact, unlike the Dome of the Rock, the mosque is not generally used as a pan-Islamic symbol, but rather is usually employed as an Islamic symbol of Palestinian national identity.

In the context of this image, it seems that the image of fire is also being used to reference the common perception that Islam’s holy sites are under threat from foreign influence and occupation (in this case, Israeli occupation).