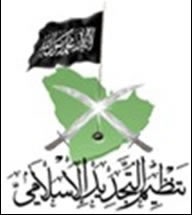 Depicting the Saudi state alone, without bordering countries or bodies of water, emphasizes the national context and scope of that specific regional jihad. The country is colored green, which is considered the traditional color of the Prophet Muhammad’s tribe, and which has been adopted as a sacred color based on Qur’anic verses (76:21; 18:65-82) and a reliable hadith (prophetic tradition or report) that associates green with “universally good things.” The color is also related to jihadi doctrine, as it is believed that while the corpses of martyrs lay in their graves, their souls are to be put into the bodies of green birds that drink from the rivers of Eden and eat from its fruit.

The crossed swords in the logo suggest a desire on the part of the designer to link the group to early Islamic history and the first generation of Muslims. Swords are seen as noble weapons that embody the religious purity, nobility and righteousness that is associated with the Prophet, his companions and their successful military campaigns. This helps depict current jihadi activities as modern extensions of those campaigns and lends them an aura of legitimacy.

The black banner that bears the shahada (Islamic testimony of faith holding that there is no god but Allah and that Muhammad is his messenger) is a common visual motif signaling engagement in or the call to jihad. According to hadith, the black flag was the battle flag of the Prophet Muhammad and was carried into battle by many of his companions. The image of the black flag has been used as a symbol of religious revolt and engagement in battle (i.e., jihad). In the contemporary Islamist movement, the black flag is used to evoke notions of jihad and of reestablishing the Islamic Caliphate.

The text at the bottom of the image reads tanzim al-tajdid al-Islami, a reference to a jihadist forum.