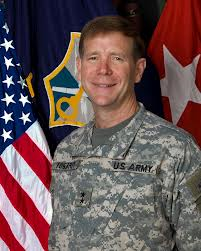 MG Stephen Fogarty, Commander of Intelligence and Security Command (INSCOM), visited the CTC on Thursday, 10 March. In addition to engaging with the CTC faculty during a roundtable discussion, MG Fogarty also had lunch with the General Wayne A. Downing Scholars at the West Point Club and he led a Q&A session with USMA Military Intelligence officers and cadets.