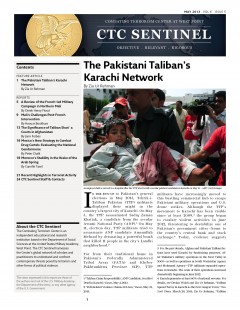 In 2012, Mexicans elected Enrique Pena Nieto of the Institutional Revolutionary Party (PRI) as president. On assuming power, Nieto pledged to reverse the militarized counternarcotics policies of his predecessor, Felipe Calderon, which he maintained were responsible for unleashing a bloody drug war that over the course of six years left thousands dead. Central to Nieto’s approach is the creation of a National Gendarmerie that will henceforth assume primary responsibility for fighting drug cartels in the country.

This article evaluates Calderon’s campaign against drug cartels in Mexico and outlines current plans to create the National Gendarmerie. It finds that while the Nieto government has touted the force as the first step in gradually returning the counternarcotics mission from the army to the police, it is unclear that the unit represents anything new or is relevant to the internal threat dynamics of Mexico. In fact, it may exacerbate what is already an extremely complex national law enforcement structure, in addition to significantly overstretching the functional capability of the military.

Calderon’s Onslaught and its Impact on Drug Cartels in Mexico
In 2006, Felipe Calderon instituted a major counternarcotics campaign against Mexican cartels in a concerted effort to disrupt and destroy the critical nodes of drug trafficking in the country. At its height, the strategy involved the deployment of 96,000 combat troops, nearly 40% of all active personnel, to directly confront syndicates and their leaders.[1] The United States actively supported the crackdown, pledging $1.4 billion of counternarcotics assistance for fiscal years 2008 and 2010 in what subsequently became known as the Merida Initiative.[2] U.S. support continued under the Barack Obama administration, although at a somewhat lower level ($660 million between 2011 and 2012).[3]

Although Calderon’s policy was instrumental in eliminating several key drug lords as well as making record cocaine seizures, it had the unintended effect of unleashing a highly brutal war in the northern provinces. Over the course of six years, at least 40,000 and possibly as many as 60,000 people are thought to have died in drug-related fighting as increasingly fragmented cartels moved to engage each other and the authorities in a vicious battle over territory and sales “turf.”[4] Those targeted have included members of competing cartels, law enforcement personnel, businessmen, local government officials and ordinary civilians. Victims have been beheaded, dismembered and even skinned or boiled alive.[5]

Aside from spawning extreme violence, the Merida Initiative also failed to significantly disrupt syndicate activity. Currently, 10 major cartels operate in the country (see Figure 1 in PDF version), competing with one another on numerous fronts and within the context of a constantly evolving pattern of strategic and tactical alliances. Of these, two cartels are especially powerful and far-reaching: the Sinaloa Federation, which is primarily based in northwest Mexico and down the Baja Peninsula; and Los Zetas, which dominates the northeast and areas around the Gulf of Mexico. Both have established links with Andean cocaine producers and each has an extensive presence in the criminal world of Central America, particularly in Guatemala.[6]

Finally, Calderon’s approach had little impact on corruption. Cartels continue to enjoy an exceptionally strong influence over municipal law enforcement, which according to former Public Security Secretary Genaro Garcia currently “supplement” operational and organizational budgets with up to 1.2 billion pesos ($94 million) of criminal money.[7] Syndicates have also retained inroads to both the Federal Police and the judicial system, reflected by the remarkable state of impunity that presently exists in Mexico. Nationally, 80% of homicides remain unsolved, while overall criminal conviction rates currently stand at just two percent.[8]

The Enrique Pena Nieto Solution: The National Gendarmerie
Responding to the apparent failure of the Merida Initiative to fundamentally weaken the drug threat gripping the country, Enrique Pena Nieto announced a “Pact for Mexico” on coming to power in  December  2012.[9] A central platform of his proposed solution is to take the counternarcotics function out of the hands of the military—which he argues has not only been ineffective but counterproductive—and return it to a law enforcement structure that is “clean,” transparent and trusted.[10] To this end, the government has pledged to create an entirely new paramilitary unit that is equipped and authorized to reestablish security across the country.

The National Gendarmerie, which is modeled after counterparts in France and Spain, is due to become operational later this year. According to the Office of the Presidency, the “corps will be responsible for strengthening territorial control in rural municipalities with the greatest institutional weakness, as well as strategic installations such as ports, airports and borders.”[11] The force will fall under the authority of the secretary of the interior and initially be 10,000-strong, with 8,000 personnel drawn from the army (which, unlike the police, has largely not been afflicted by corruption) supplemented by 2,000 marines from the navy.[12] The plan is to expand this cadre to 40,000 during the next two years with all personnel assigned on long-term deployments.[13] Although a civilian will have the responsibility for leading these personnel, the troops themselves will remain under military/naval command.

The National Gendarmerie will be divided into 14 regional commands that correspond to major drug trafficking zones in the country. Three bases will be established along the U.S.-Mexico border and are expected to be fully operational by the beginning of June 2013.[14] Members will be thoroughly vetted, equipped with modern weaponry and body armor and will have access to an air lift capacity of at least 24 helicopters.[15] According to the PRI, the force will be financed from fiscal and energy reforms, with initial expenditures estimated in the range of 1.5 billion pesos ($117.4 million); exact dollar figures have yet to be made public.[16]

Apart from fighting the drug cartels, the National Gendarmerie will have information collection authority. To this end, it will work closely with the National Security and Investigation Center (CISEN)—Mexico’s main intelligence agency—and other units mandated to investigate organized crime groups. Considerable emphasis will be placed on monitoring rural jurisdictions where the state has a limited presence.[17]

Assessment
Despite the optimism surrounding the National Gendarmerie, it is not apparent that the force represents a fundamental departure from Calderon’s militarized counternarcotics approach. Although falling under the Ministry of the Interior, the National Gendarmerie will mostly consist of soldiers who will remain under military/naval command. These troops will be heavily armed, uniquely trained in rapid assault tactics (rather than more standard evidentiary procedures) and specifically authorized to operate above force levels that typically apply to the police. The unit will also be large; while not as extensive as the 96,000 personnel that were ultimately deployed by Calderon, it will be on par with force levels that were mobilized when Calderon first came to power (45,000 in 2007).[18] As one commentator remarked, despite the rhetoric of a new approach, the gendarmerie may simply end up doing the same thing in the same places and with basically the same tactics, leadership and equipment as previous army units.[19]

The National Gendarmerie will also add another layer of complexity to what is already a highly convoluted law enforcement community in Mexico. A plethora of forces exist in the country, all of which answer to separate mandates, command structures and bureaucratic management systems. The gendarmerie may inject a new element of confusion to this Byzantine picture, especially given that it is meant to operate across all levels of governance—local, state and national. Particular problems are likely to arise with the Federal Police, not least in terms of how they will share resources (including helicopters), delineate jurisdictions and coordinate intelligence.[20] These problems have been encountered in the two countries on which the National Gendarmerie is modeled—France and Spain—both of which are now looking to merge their national forces.[21]

A further problem has to do with the rural focus of the National Gendarmerie. The force is primarily being readied to boost security and surveillance in remote areas where the state has a limited presence. This is at odds with the urbanized nature of Mexico where up to 80% of homicides and 95% of all crime occurs in the cities—not in the countryside.[22]

Finally, the projected number of troops who are slated to fill the ranks of the National Gendarmerie is 40,000. While this represents only a fifth of Mexico’s total armed forces (including doctors, nurses, administrative employees, custodial staff and engineers), it amounts to around a third of its operational personnel. This is a sizeable cut and could erode the military’s ability to perform traditional functions of territorial defense as well as assistance missions in responding to major natural disasters.[23]

There is certainly reason to believe that the militarized counternarcotics tack of Felipe Calderon did not work and that an alternative strategy is now required. The dividend resulting from President Nieto’s proposed approach, however, could be marginal at best. Rather than creating a new national force, another option could have been to reform the command structure and oversight controls of the existing Federal Police and ensure that serving officers at the state and local levels are fully vetted, properly trained and above all adequately paid.[24]

Dr. Peter Chalk is a Senior Policy Analyst with the RAND Corporation, Santa Monica, CA. He has worked on a range of projects examining soft power “diplomacy,” civil-military relations, security sector reform, international peace operations and unconventional sub-state threats in the Asia-Pacific, Latin America and sub-Saharan Africa. He is author of numerous books, book chapters and journal articles on these subjects and has testified on several occasions before the U.S. Congress. Dr. Chalk is Associate Editor of Studies in Conflict and Terrorism, one of the foremost journals in the international security field.

Iran’s Currency Laundromats in the Emirates

Dollars for Daesh: The Small Financial Footprint of the Islamic State’s American Supporters

A View from the CT Foxhole: An Interview with Kevin McAleenan, Commissioner of U.S. Customs and Border Protection

Crime as Jihad: Developments in the Crime-Terror Nexus in Europe