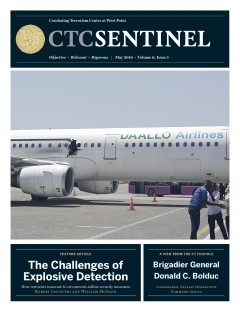 The crash of EgyptAir Flight 804 under yet-to-be explained circumstances has refocused attention on aviation security. Our cover story this month, which we commissioned after a bomb hidden in a laptop was detonated onboard a Somali passenger jet in February, focuses on the technological arms race between terrorist bomb makers and those working to prevent bombs from getting onto planes. Robert Liscouski and William McGann, two leading specialists in aviation security and explosives detection, identify lagging security at airports in the developing world as the Achilles’ heel of the global aviation system. In our interview Brigadier General Donald Bolduc, who leads Special Operations Command Africa, explains how U.S. Special Forces have acted as a counterterrorism “force multiplier” for partnered African countries.

Magnus Ranstorp examines how Islamic State recruits from Europe are raising significant funds through microfinance techniques within the European Union and transferring the proceeds to the Islamic State. With the very recent death of Taliban emir Mullah Mansoor in a U.S. airstrike, Tore Hamming and Olivier Roy weigh the costs and benefits to al-Qa`ida of al-Zawahiri’s bay`a to Mansoor last summer, arguing that the strengthening fortunes of the Taliban and al-Zawahiri’s need for allies to confront the Islamic State make it likely he will also subordinate himself to newly appointed Taliban leader Mullah Haibatullah Akhunzada. As the world watches to see if an internationally backed Government of National Accord in Libya can establish itself and take on the Islamic State and other terrorist groups present there, Andrew McGregor examines how security in southern Libya might be impacted if international powers decide to intervene militarily. Finally, Animesh Roul outlines how Bangladesh has increasingly become fertile ground for al-Qa`ida and the Islamic State with both groups taking advantage of an upsurge in Islamist militancy to expand their presence and to build alliances with local jihadist groups.

The Strategic Topography of Southern Libya

Microfinancing the Caliphate: How the Islamic State is Unlocking the Assets of European Recruits

Al-Zawahiri’s Bay`a to Mullah Mansoor: A Bitter Pill but a Bountiful Harvest