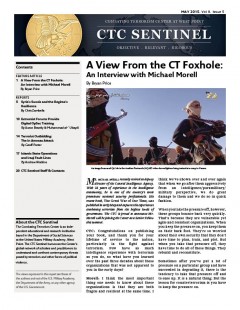 A View From the CT Foxhole: An Interview with Michael Morell
By Bryan Price

In this month’s Sentinel, we spoke with Mr. Michael Morell who recently retired as deputy director of the Central Intelligence Agency. With 33 years of experience in the intelligence community, he is one of the country’s most prominent national security professionals. His recent book, The Great War of Our Time, was published in early May and captures his experiences combating terrorism from the highest levels of government. The CTC Sentinel recently interviewed Mr. Morell about his years of service and his thoughts on terrorist groups and the best way to counter them.

A View From the CT Foxhole: An Interview with Michael Morell

Syria’s Sunnis and the Regime’s Resilience

Terrorist Outbidding: The In Amenas Attack