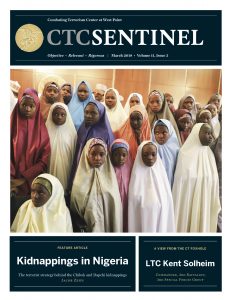 This issue focuses on counterterrorism challenges in Africa. Next month marks the four-year anniversary of Boko Haram’s kidnapping of as many as 276 schoolgirls in Chibok, Nigeria. The hostage attack created global outrage and sparked the social media campaign #BringBackOurGirls. In our cover article, Jacob Zenn outlines the internal dynamics within Boko Haram that led the group to eventually enter into negotiations and release many of the girls. Zenn compares and contrasts the terrorist calculus in this earlier hostage crisis with the kidnapping of 111 schoolgirls in Dapchi, Nigeria, last month, which also resulted in many of the girls being released.

Our interview is with Lieutenant Colonel Kent Solheim, commander of 3rd Battalion, 3rd Special Forces Group, which is currently focused on security challenges in Africa. Christopher Anzalone documents how al-Shabaab has continued to take advantage of turmoil in Somalia to sustain its operations and maintain itself as the dominant jihadi group in the country. In the wake of rising jihadi violence in Burkina Faso, including an attack on the French embassy and the Burkinabe army headquarters earlier this month, Héni Nsaibia and Caleb Weiss profile the recently established al-Qa`ida-aligned Burkinabe terrorist group Ansaroul Islam and the threat it poses to the country.

Markus Binder, Jillian Quigley, and Herbert Tinsley examine the Islamic State’s development and deployment of chemical weapons. They note that while the group has used such weapons on the battlefield in Syria and Iraq, it has featured little in its propaganda, calling into question how useful the group sees these weapons in advancing its strategic goals. While there has been much alarm about the threat of chemical terror attacks in the West, the authors note the only evidence so far that the Islamic State has transferred its chemical warfare expertise from the battlefield to its foreign terrorism activities is the summer 2017 Sydney hydrogen sulfide plot.

The Terrorist Calculus in Kidnapping Girls in Nigeria: Cases from Chibok and Dapchi

Black Banners in Somalia: The State of al-Shabaab’s Territorial Insurgency and the Specter of the Islamic State

Ansaroul Islam and the Growing Terrorist Insurgency in Burkina Faso

Islamic State Chemical Weapons: A Case Contained by its Context?