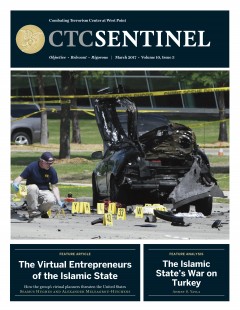 In our feature article, Seamus Hughes and Alexander Meleagrou-Hitchens focus on the threat to the United States from the Islamic State’s “virtual entrepreneurs” who have been using social media and encryption applications to recruit and correspond with sympathizers in the West, encouraging and directing them to engage in terrorist activity. They find that since 2014, contact with a virtual entrepreneur has been a feature of eight terrorist plots in the United States, involving 13 individuals.

In our other cover article, Ahmet Yayla, the former police counterterrorism chief in the Turkish city of Sanliurfa near the Syrian border, outlines how investigations into the New Year’s Eve Reina nightclub attack in Istanbul have made clear the “immense scale of the Islamic State threat to Turkey.” While the attack, remotely steered by Islamic State operatives in Raqqa, was the work of a single gunman, a 50-strong network in Istanbul with access to at least half a million dollars provided logistical support. With the Islamic State declaring all-out war on Turkey, Turkish counterterrorism capacity severely weakened by recent purges, as many as 2,000 Islamic State fighters already on Turkish soil, and the possibility that Islamic State fighters will flood into Turkey as the caliphate crumbles, Yayla warns of severe implications for international security.

Daniel Heinke, the director of the state bureau of investigation (LKA) in Bremen, outlines the key findings of an official German study of almost 800 German foreign fighters—the largest such study by a Western government—and the takeaways for smarter counterterrorism. He notes that while the number of Germans traveling to join the Islamic State has slowed to a trickle, there has been a surge in violent Islamist extremism inside the country, creating concern that returning foreign fighters will add “lethal capabilities to an already highly adrenalized Islamist community.” Andrew Zammit outlines how the jihadi threat in Australia has transformed since the Islamic State called for attacks in Western countries. While there has been an increase in attacks and plots in Australia, they have also become less sophisticated and ambitious. Finally, Matthew DuPée examines the growing financial windfall the Afghan Taliban and other jihadi groups are extracting from illegal mining in Afghanistan, which is now providing the Taliban with as much as $300 million in revenue per year.

Australian Jihadism in the Age of the Islamic State

The Reina Nightclub Attack and the Islamic State Threat to Turkey

The Taliban Stones Commission and the Insurgent Windfall from Illegal Mining

German Foreign Fighters in Syria and Iraq: The Updated Data and its Implications