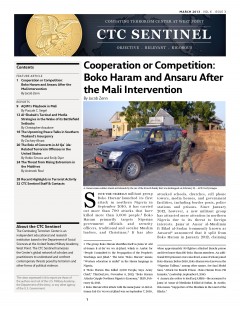 Cooperation or Competition: Boko Haram and Ansaru After the Mali Intervention
By Jacob Zenn

Since the Nigerian militant group Boko Haram launched its first attack in northern Nigeria in September 2010, it has carried out more than 700 attacks that have killed more than 3,000 people. Since January 2012, however, a new militant group has attracted more attention in northern Nigeria due to its threat to foreign interests. Jama`at Ansar al-Muslimin fi Bilad al-Sudan (commonly known as Ansaru) announced that it split from Boko Haram in January 2012, claiming that Boko Haram was “inhuman” for killing innocent Muslims as well as for targeting defectors. Ansaru’s almost exclusive focus on foreign targets may also explain why the two groups could not coexist. This article reviews Ansaru’s attacks on foreign interests in Nigeria, the possible role of al-Qa`ida operative Mokhtar Belmokhtar in steering Ansaru toward kidnapping foreigners despite Boko Haram’s rejection of the tactic, and why al-Qa`ida in the Islamic Maghreb (AQIM) chose to collaborate more with Ansaru than Boko Haram. Finally, the article assesses the future of Ansaru and Boko Haram now that the French-led military intervention has driven AQIM from northern Mali and potentially killed Belmokhtar.

Cooperation or Competition: Boko Haram and Ansaru After the Mali Intervention

The Threat from Rising Extremism in the Maldives